Cyberpunk 2077 Design Lead Andrzej Zawadzki exits CDPR after nearly 8 years. Subscribe to read. The evolution of video game design. Gamer Mode continues this weekend and legendary games designer John Romero joins the gang on Saturday at 11.30am on RTÉ2 to tell us all about his work. 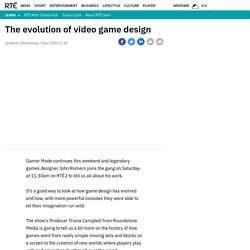 It's a good way to look at how game design has evolved and how, with more powerful consoles they were able to let their imagination run wild. The show's Producer Tríona Campbell from Roundstone Media is going to tell us a bit more on the history of how games went from really simple moving dots and blocks on a screen to the creation of new worlds where players play with and against each other all over the world. Sid Meier, the master of strategy game design, once said that a game is a series of meaningful choices.

I could not agree more. While playing a video game we make dozens – sometimes hundreds – of small decisions per minute, like jump, shoot or move the joystick left or right. And it is the role of the game designer to create those choices, present the player with exciting options that will keep them engaged for hours. Www.gamesindustry. From Assassin's Creed Valhalla to the upcoming Cyberpunk 2077, open world games are becoming larger and more complex, with developers devoting more and more time and resources to ensuring they are populated with activities and engaging events for players. 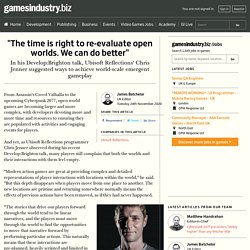 And yet, as Ubisoft Reflections programmer Chris Jenner observed during his recent Develop:Brighton talk, many players still complain that both the worlds and their interactions with them feel empty. "Modern action games are great at providing complex and detailed representations of player interactions with locations within the world," he said. "But this depth disappears when players move from one place to another. The new locations are pristine and returning somewhere normally means the effects of previous actions have been removed, as if they had never happened. Chris Jenner, Ubisoft Reflections. The 8 Generations of Video Game Consoles - BBC Archive. Components of Video Game Design. Believe it or not, the first video games were developed back in the early 1950’s when computer scientists designed games and simulations for their research. 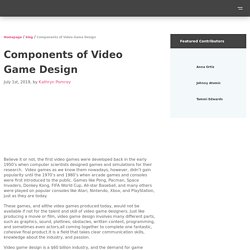 Video games as we know them nowadays, however, didn’t gain popularity until the 1970’s and 1980’s when arcade games and consoles were first introduced to the public. Games like Pong, Pacman, Space Invaders, Donkey Kong, FIFA World Cup, All-star Baseball, and many others were played on popular consoles like Atari, Nintendo, Xbox, and PlayStation, just as they are today. The male-dominated video game industry grapples with maternity. Games developers often refer to games they’ve worked on as their babies. 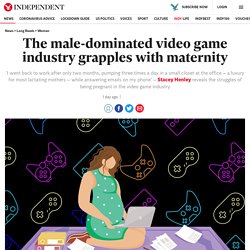 For Jo Haslam, game design director at Snap Finger Click, that is more literal than for most. “My partner (who also works at Snap Finger Click) brought his laptop to the hospital when I went into labour. I gave birth at 9pm, and my partner pushed the release button of our game at 9am the next morning,” says Haslam. “I hadn’t made a big deal out of being pregnant, so when I posted about our new baby a lot of people thought I was referring to the game.” Haslam’s experience highlights the relentlessness of games development, but by her own admission, she’s one of the luckier ones.

Download the new Independent Premium app Sharing the full story, not just the headlines Others are not so fortunate, detailing instances inside the game development sphere that show the industry is awkwardly grappling with issues around pregnancy and maternity. Fatherhood has been a popular theme in gaming this past decade. Alwyn Lee's Blog - What it takes to stay in the game industry. The following blog post, unless otherwise noted, was written by a member of Gamasutra’s community. 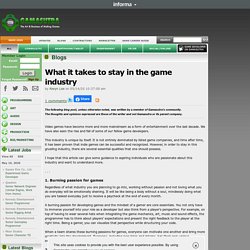 The thoughts and opinions expressed are those of the writer and not Gamasutra or its parent company. Video games have become more and more mainstream as a form of entertainment over the last decade. We have also seen the rise and fall of some of our fellow game developers. This industry is unique by itself. James Youngman's Blog - Matrix Design. The following blog post, unless otherwise noted, was written by a member of Gamasutra’s community. 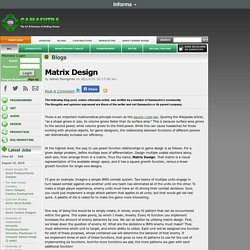 The thoughts and opinions expressed are those of the writer and not Gamasutra or its parent company. There is an important mathematical principle known as the square–cube law. Quoting the Wikipedia article, “as a shape grows in size, its volume grows faster than its surface area.” This is because surface area grows to the second power, while volume grows to the third power. While this can cause headaches for those working with physical objects, for game designers, the relationship between functions of different powers can dramatically increase our efficiency. At the highest level, the way to use power function relationships in game design is as follows. I'll give an example. One way of doing this would be to simply create, in whole, every AI pattern that can be encountered within the game. Figure 1: In matrix (a) six functions results in nine possible patterns. Narek Aghekyan's Blog - 7 Must-read Books for Game Designers. 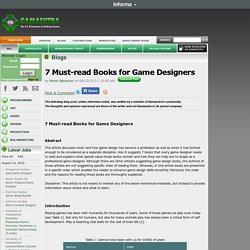 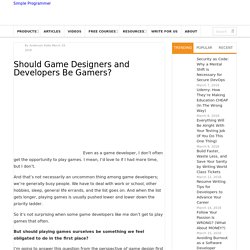 I mean, I’d love to if I had more time, but I don’t. And that’s not necessarily an uncommon thing among game developers; we’re generally busy people. We have to deal with work or school, other hobbies, sleep, general life errands, and the list goes on. And when the list gets longer, playing games is usually pushed lower and lower down the priority ladder. So it’s not surprising when some game developers like me don’t get to play games that often. Stuart Lilford's Blog - 5 Common mistakes made by students making their first games and how to fix them. The following blog post, unless otherwise noted, was written by a member of Gamasutra’s community. 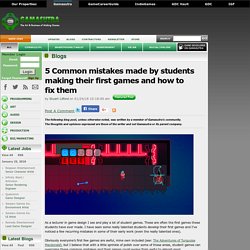 The thoughts and opinions expressed are those of the writer and not Gamasutra or its parent company. As a lecturer in game design I see and play a lot of student games. These are often the first games these students have ever made. I have seen some really talented students develop their first games and I’ve noticed a few recurring mistakes in some of their early work (even the really talented ones). Obviously everyone’s first few games are awful, mine own included (see: The Adventures of Turquoise Macdonald), but I believe that with a little sprinkle of polish over some of these areas, student games can overcome these common mistakes and their games could evolve from awful to almost-good.

Liz England's Blog - Types of Designers. The following blog post, unless otherwise noted, was written by a member of Gamasutra’s community. 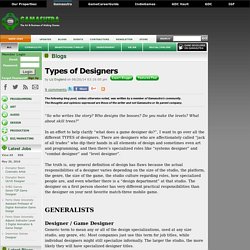 Are you a hack game designer? You are, if, in order to win your game, players must: 01. Roll Better Numbers Where I come from, we call this gambling. Is this appropriate for little kids? Slaton White's Blog - Tools of a Game Designer: What I use and What is out There. The following blog post, unless otherwise noted, was written by a member of Gamasutra’s community. The thoughts and opinions expressed are those of the writer and not Gamasutra or its parent company.

There are a variety of ways to go about designing a game. Luckily enough I’ve had enough projects to work on and enough freedom to try different ways to design them. What Games Are: Is Formal Game Design Valuable? Editor’s note: Tadhg Kelly is a consultant game designer and creator of leading game design blog What Games Are. You can follow him on Twitter here. Plagiarism as a moral choice. Plagiarism is defined in dictionaries as the "wrongful appropriation," "close imitation," or "purloining and publication" of another author's "language, thoughts, ideas, or expressions," and the representation of them as one's own original work, but the notion remains problematic with nebulous boundaries. The modern concept of plagiarism as immoral and originality as an ideal emerged in Europe only in the 18th century, particularly with the Romantic movement, while in the previous centuries authors and artists were encouraged to "copy the masters as closely as possible" and avoid "unnecessary invention.

The 18th century new morals have been institutionalized and enforced prominently in the sectors of academia and journalism, where plagiarism is now considered academic dishonesty and a breach of journalistic ethics, subject to sanctions like expulsion and other severe career damage... Plagiarism is not a crime per se but is disapproved more on the grounds of moral offence... Combat Game Designer: What Do Combat Designers Do? What Unique Skills Are Required for Combat Design? Did you know... Each year more than 25% of the student population of The Digital Animation & Visual Effects School (DAVE School) comes from outside the US to attend the school at Universal Studios in Orlando, Florida. Features - Old Grumpy Designer Syndrome. [What happens when designers have no clear career path, and there's no culture in the studio that helps nurture them?

You get an old grumpy designer. Choppin’ Broccoli: The Process of Game Design - Reality Blurs. Some folks liken any discussion about “The Process” as ugly work akin to making sausage. Well, you’re not gonna get that here. Tackling Design Simplicity at SXSW Interactive. AUSTIN, Texas—"Complexity is easy. We can make anything complex," says Dave Hogue. A Game Designer's Manifesto: The 7 Virtues of a Desamurai. Starting From Scratch: Five Tips for Better Game Design. Don't Assume Players Are Stupid. Super Metroid is mighty impressive in ways you may not notice, especially if you only played it as a teenager.

Before entering the room containing the destructive Plasma Beam, there’s a pile of goo requiring several shots. Samus--well, the player--enters the room, and finds the Plasma Beam waiting for them in the corner. GDC 2012: How designers can increase innovation in their games. Game designers have a choice: Spend your professional life trying to make something interesting and new, or spend it creating "shady, derivative crap. " This was the pointed message from Daniel Cook, Chief Creative Officer at Spry Fox (Triple Town), in a talk delivered at GDC this afternoon. "There's a lot more to life than than cloning the work of others and merely adding your own 10 percent innovation," he said. Richard Terrell's Blog - Game Design Dictionary. Features - Where Are They Now? Tracking The Trajectories Of Classic Developers. Richard Garriott. Brian Reynolds. John Romero.

They're three of the biggest names in gaming history, designers, respectively, of widely acknowledged classics like Ultima, Civilization II, and Doom. They have also all moved into social games. Three Novice Mistakes in Game Design. The Game Innovator's Dilemma - Betable Game Monetization Blog. Bored Game – A Cautionary Tale For Design Students (Part 2) « #AltDevBlogADay. Earlier this month, I embarked on a two-part odyssey chronicling the misadventures of my design team as we built an analog game for class. You can read part one here, but the tl;dr version goes like this: We spent two weeks of a three-week project developing a game that we were too stubborn to admit broken. Bored Game – A Cautionary Tale For Design Students (Part 1) « #AltDevBlogADay. Confessions of a designer » #AltDevBlogADay. Am I Doing Meaningful Game Design Work? « #AltDevBlogADay. Theoretical Road Blocks in Design (and how to circumvent them) « #AltDevBlogADay.