Obviously a Major Malfunction...: Fun with Masked ROMs - Atmel MARC4. Welcome to opencv documentation! — OpenCV v2.4.3 documentation. Digital Camera Interface. Iñaki Navarro Oiza Report ::: Code ::: Slides Introduction The aim of this project is the development and construction of an interface between a CMOS camera and a computer. 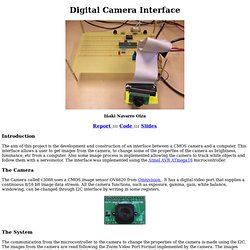 This interface allows a user to get images from the camera, to change some of the properties of the camera as brightness, luminance, etc from a computer. Also some image process is implemented allowing the camera to track white objects and follow them with a servomotor. The Camera The Camera called c3088 uses a CMOS image sensor OV6620 from Omnivision . C328R Jpeg camera and .NET Micro Framework. One of the cool devices I wanted to get work with .NET Micro Framework was a camera. 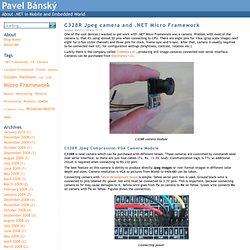 Problem with most of the camera is, that it's using almost 20 pins when connecting to CPU. There are eight pins for Y-bus (gray-scale image) next eight for U-bus (color channel) and three pins for clock, frame-sync and h-sync. After that, camera is usually required to be connected over I2C, for configuration settings (brightness, contrast, rotation etc.) En.myinventions.pl - blender, arduino, processing, 3d scanning. Pan tracking webcam using OpenCV and Arduino.

Video Production Module for Altera DE2 Board. The green screen is very stable. 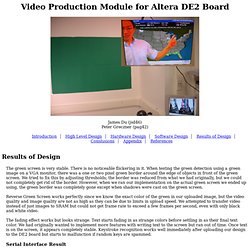 There is no noticeable flickering in it. When testing the green detection using a green image on a VGA monitor, there was a one or two pixel green border around the edge of objects in front of the green screen. We tried to fix this by adjusting thresholds; the border was reduced from what we had originally, but we could not completely get rid of the border. However, when we ran our implementation on the actual green screen we ended up using, the green border was completely gone except when shadows were cast on the green screen.

Reverse Green Screen works perfectly since we know the exact color of the green in our uploaded image, but the video quality and image quality are not as high as they can be due to limits in upload speed. The fading effect works but looks strange. Serial Interface Result Sample tests of the transmission indicated that we get on average a single bit error every 1 million bits sent approximately. Images Videos. Human Tetris - Video Object Tracking. Untitled. For our ECE536 final project, we have implemented real-time sobel edge detection. 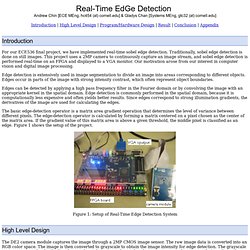 Traditionally, sobel edge detection is done on still images. This project uses a 2MP camera to continuously capture an image stream, and sobel edge detection is performed real-time on an FPGA and displayed to a VGA monitor. Our motivation arose from our interest in computer vision and digital image processing. Edge detection is extensively used in image segmentation to divide an image into areas corresponding to different objects. Edges occur in parts of the image with strong intensity contrast, which often represent object boundaries. Face detection using HTML5, javascript, webrtc, websockets, Jetty and OpenCV. Through HTML5 and the corresponding standards, modern browsers get more standarized features with every release. 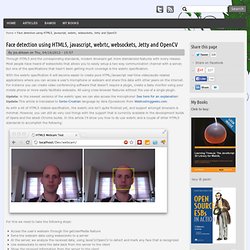 Most people have heard of websockets that allows you to easily setup a two way communication channel with a server, but one of the specifications that hasn't been getting much coverage is the webrtc specificiation. With the webrtc specification it will become easier to create pure HTML/Javascript real-time video/audio related applications where you can access a user's microphone or webcam and share this data with other peers on the internet. For instance you can create video conferencing software that doesn't require a plugin, create a baby monitor using your mobile phone or more easily facilitate webcasts. All using cross-browser features without the use of a single plugin. How to set up a bird box camera inside a nest box - Install a camera, for blue tit, great tit, house sparrow boxes etc. Two of the most frequently asked questions of site visitors are (1) 'What make of camera do you use in your bird box? 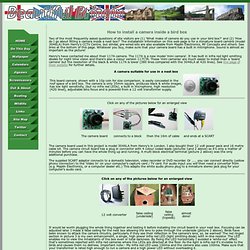 ' and (2) 'How do I go about fitting a camera inside a nest box? ' The installation information on this web page is for a miniature board camera (model 3046LA) from Henry's CCTV Centre, but similar, pre-wired kits are also available from Maplin Electronics, RF Concepts and others. See links at the bottom of this page. Whatever you buy, make sure that your camera board has a built in microphone. Sound is almost as important as the picture! Using an Autostar Telescope Positioner for Tracking Aircraft. Living south of downtown San Jose gives us a fantastic and regular view of aircraft on approach. Captin nod: The fisheye tin cam. [You can find other DIY photography projects here][Also I'd like to shout out to the good folks at Photojojo - if you like photo goodies, I'd recommend perusing their catalog of awesome. *] Fisheye lenses are insanely fun to shoot with. 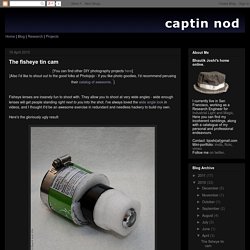 They allow you to shoot at very wide angles - wide enough lenses will get people standing right next to you into the shot. I've always loved the wide angle look in videos, and I thought it'd be an awesome exercise in redundant and needless hackery to build my own. Webcam into Growl CCTV camera! Got any old webcam's hanging around like I did? Camerahacking. Welcome - OpenCV Wiki. OpenCV. History[edit] Advance vision research by providing not only open but also optimized code for basic vision infrastructure. 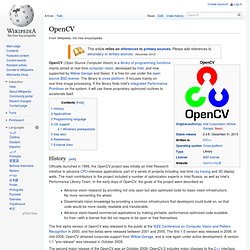 No more reinventing the wheel.Disseminate vision knowledge by providing a common infrastructure that developers could build on, so that code would be more readily readable and transferable.Advance vision-based commercial applications by making portable, performance-optimized code available for free—with a license that did not require to be open or free themselves. The first alpha version of OpenCV was released to the public at the IEEE Conference on Computer Vision and Pattern Recognition in 2000, and five betas were released between 2001 and 2005. The first 1.0 version was released in 2006. Generalised Hough transform. The problem of finding the object (described with a model) in an image can be solved by finding the model's position in the image. 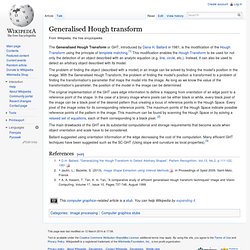 With the Generalised Hough Transform, the problem of finding the model's position is transformed to a problem of finding the transformation's parameter that maps the model into the image. As long as we know the value of the transformation's parameter, the position of the model in the image can be determined. The original implementation of the GHT uses edge information to define a mapping from orientation of an edge point to a reference point of the shape. In the case of a binary image where pixels can be either black or white, every black pixel of the image can be a black pixel of the desired pattern thus creating a locus of reference points in the Hough Space.

Every pixel of the image votes for its corresponding reference points. Www.vision.ee.ethz.ch/~surf/eccv06.pdf. Www.willowgarage.com/sites/default/files/orb_final.pdf. Www.cs.ubc.ca/~lowe/papers/ijcv04.pdf. Java - Algorithm improvement for Coca-Cola can shape recognition. Canny edge detector. The Canny edge detector is an edge detection operator that uses a multi-stage algorithm to detect a wide range of edges in images. 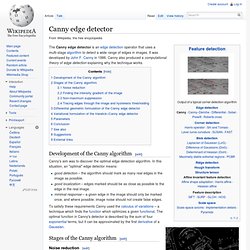 The framework is comprised by the set of libraries and sample applications, which demonstrate their features: Zdenek Kalal. Researchers amplify variations in video, making the invisible visible. At this summer's Siggraph — the premier computer-graphics conference — researchers from MIT's Computer Science and Artificial Intelligence Laboratory (CSAIL) will present new software that amplifies variations in successive frames of video that are imperceptible to the naked eye. Easy Eye: SiLabs 8051 + Camera - ChipSight. Image capture and 60fps color object targeting with an 8-bit microprocessor and a CMOS camera. This is a simple demo to illustrate a larger idea: computer vision with limited resources enables emerging applications for consumer products. The goal is to prove the ability of the F360 to perform machine vision tasks.

Calculating Speed using a Webcam. Have you ever wanted to know how fast something is moving? Jérôme. Human Interface Technology Lab - How the VRD works. Blinded by the Light: DIY Retinal Projection.