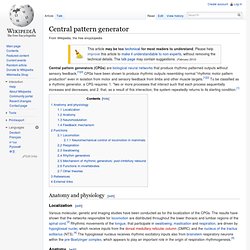 "two or more processes that interact such that each process sequentially increases and decreases, and 2. that, as a result of this interaction, the system repeatedly returns to its starting condition.[1] Anatomy and physiology[edit] Homunculus. Motorsomato. THE AMYGDALA AND ITS ALLIES. Amygdala activation. Polyvagal Theory. Phylogenetic Subsystems/Stages[edit] The vagus nerve is a primary component of the autonomic nervous system. 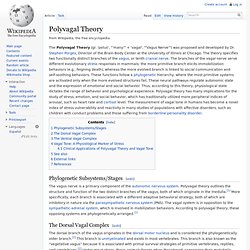 Polyvagal theory outlines the structure and function of the two distinct branches of the vagus, both of which originate in the medulla.[1] More specifically, each branch is associated with a different adaptive behavioral strategy, both of which are inhibitory in nature via the parasympathetic nervous system (PNS). The vagal system is in opposition to the sympathetic-adrenal system, which is involved in mobilization behaviors. According to polyvagal theory, these opposing systems are phylogenetically arranged.[1] The Dorsal Vagal Complex[edit] Amazon. The polyvagal theory: New insights into adaptive reactions of the autonomic nervous system. Polyvagal_Theory. Vagus_nerve. Gimo2-f7. Molmedvagusmacroph1. Vagus. Chewing-pencil-410x290.