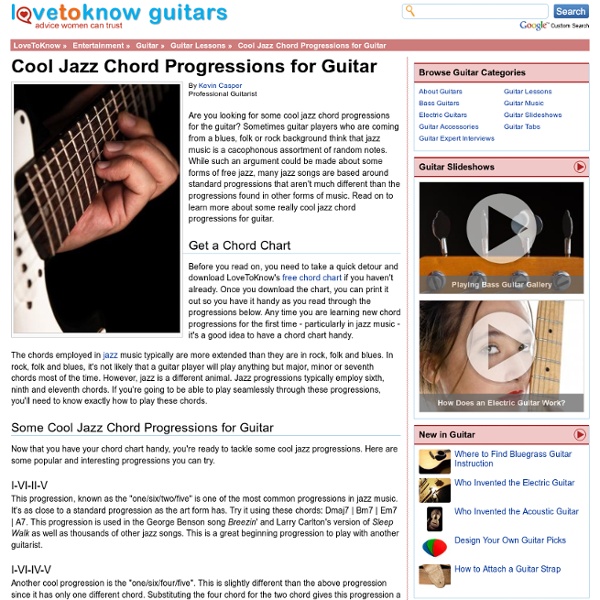 Are you looking for some cool jazz chord progressions for the guitar? Sometimes guitar players who are coming from a blues, folk or rock background think that jazz music is a cacophonous assortment of random notes. While such an argument could be made about some forms of free jazz, many jazz songs are based around standard progressions that aren't much different than the progressions found in other forms of music. Read on to learn more about some really cool jazz chord progressions for guitar. Get a Chord Chart Before you read on, you need to take a quick detour and download LoveToKnow's free chord chart if you haven't already. The chords employed in jazz music typically are more extended than they are in rock, folk and blues. Some Cool Jazz Chord Progressions for Guitar Now that you have your chord chart handy, you're ready to tackle some cool jazz progressions. This progression, known as the "one/six/two/five" is one of the most common progressions in jazz music. Find a Friend

The Chord Guide: Pt I – Chord Progressions Chord progressions are the canvas on which musicians paint their masterpieces, and it’s a canvas which is a piece of art in itself. A chord progression can be subtle and in the background or it can be blatant and up front; it can be simple and catchy, or it can be technical and complex, it can stay in one key or it can change like the seasons. In any of these cases a chord progression is what drives the song as it literally shapes the music that accompanies it. Chord progressions are like a cozy home where melody and rhythm can kick their feet up. All the songwriting giants, like John Lennon, Paul McCartney, George Harrison, and Bob Dylan, to name a few, have/had a tremendous knowledge of the art of the chord progression.

Theme and Variations - Keys A key defines the collection of pitches to be used in a given piece or section. That is, if a piece is in the key of C major, the majority of pitches will be those found in the C major scale. The tonic and dominant scale degrees are considered the most important, and since the key defines which pitches fill these roles, it also helps establish which pitches will be the most important in a given piece or section. Once we know what scale we will be using, we also know that the harmonic content will be drawn from that scale.

Playing Guitar - Chord Progressions - Folk Music Part I: I-IV-V --the One-Four-Five Chord Progression The following article is intended to give you a better understanding of the relationships of the various chords to each other. If you're reading sheet music, it will help you make some sense of the changes. If you are trying to figure out how to play a song, it will help you figure out the changes more quickly and correctly. If you're improvising or writing songs, this information is invaluable. If you play even a little folk guitar, you've probably noticed that certain sets of major chords go together: 21 Cool 3 Notes-Per-String Exercises to Rock On! Photo by Jsome1 Playing 3 notes per string exercises is something I do on a regular basis. I use them to warm up, to become a faster guitar player and to spice up my improvisation. 3 notes per string licks and scales are generally used for speed picking. Whenever you hear a guitar player playing these really fast terrifying licks, it’s probably a 3 notes per string lick. Paul Gilbert of Mr.Big is one of many great experts in this field.

Speed exercises for guitar I've used these myself, and have found them to be quite amazing, both in strengthening your fingers and in training your mind. If you look at the patterns, they represent the three patterns that most scales are composed of: Half step -whole step, whole step - half step, whole step - whole step. If you get fast enough at playing it, people will worship you. 3 Scientific Theories About The Multiverse And How It Works! www.thespiritscience.net | Original Post Date: June 6, 2014 As we look at this week’s evidence of gravitational waves and cosmic inflation, it’s becoming increasingly hard to believe that the observable universe we live in is the only universe there is. Even modern science is laying down its “knowing” cap in the face of such a grand and complex puzzle. The makeup of the universe, including all that we cannot see (which is roughly 99% of the Universe).

deftdigits Knowing every note on the guitar is a challenge unique to the instrument. A saxophone has only one way to finger each note, while a guitar usually has a few different strings and four fingers to choose from. String a few notes together and the permutations of how to play them will wreck your brain. Pianists have a similar problem with ten available digits, but you can memorize the notes on a keyboard in a matter of minutes; the same pattern of white and black keys repeats every octave. The challenge with navigating the guitar fretboard is its two-dimensional layout. It’s a matrix, while nearly every other instrument has a linear path of notes from the bottom to the top of its range.

7 Tools for Adding Questions and Notes to Videos Short videos from YouTube and other sources can be quite helpful in introducing topics to students and or reinforcing concepts that you have taught. Watching the video can be enough for some students, it's better if we can call students' attention to specific sections of videos while they are watching them. The following tools allow you to add comments and questions to videos that you share with your students. Vibby is a service for breaking YouTube videos into segments and inserting comments into those segments. To segment a YouTube video on Vibby simply grab the URL for the video and paste into the Vibby editor. Once inserted into Vibby you can highlight a segment on the video timeline.

South San Francisco area Choosing the Right Guitar -- For Those with Smaller Hands A lot of guitar students get thwarted by simply having a guitar with a neck that's too big for their hands. One size doesn't fit all. But there are choices out there. Artistic World Building with Form Language Studios Form Language Studios (its clients include Intelligent Creatures, Passion Pictures London, Passion Pictures New York, Posti Photography, Big Spaceship, Ghost VFX, BBC, Nissan, Toyota, Fiji Water) is an incredibly production company from Toronto, Canada, which deals with concept art, matte painting and other artistic services for TV, movie and game industries. We’ve had a chance to talk with the founders of FLS – Darren Lewis (Codemasters, Free Radical) and Daniel Romanovsky – and discussed their work, their approach to visual design. © Form Language Studios, 2015-2016

Collaborative Tools Skip to main content Create interactive lessons using any digital content including wikis with our free sister product TES Teach. Get it on the web or iPad! guest Learning Guitar Now: Slide, Blues, and Beginner Guitar Lessons. Do you want to learn one of the most popular slide guitar songs of all time? If you said yes, then you definitely have to learn Statesboro Blues by the Allman Brothers Band. Originally written by Willie McTell in 1928 and was remade by the Allman Brothers Band on their excellent live album “Live at the Fillmore East.” Anyone that wants to learn to play slide guitar, MUST learn this song. The slide guitar licks are just tasty, lyrical, and the epitome of electric slide guitar. I’m going to show you the first 2 licks of the song contained in the intro.

Color Meanings - Explore Palettes and Symbolism - Color Meaning and Colors That Go Together Updated October 28, 2015. Color symbolism is the use of color to represent traditional, cultural, or religious ideas, concepts, or feelings or to evoke physical reactions. Jump right to one of the colors or color groups I cover in detail or scroll past the color list for more general discussion of color meanings and how color works.