Anatomy/Surgery images for those interested in bondage safety. These images are concerning vulnerable areas of limbs. 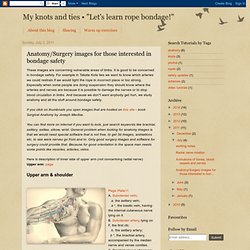 It is good to be concerned in bondage safety. For example in Takate Kote ties we want to know which arteries we could restrain if we would tight the rope in incorrect place or too strong. Especially when some people are doing suspension they should know where the arteries and nerves are because it is possible to damage the nerves or to stop blood circulation in limbs. And because we don"t want anybody get hurt, we study anatomy and all the stuff around bondage safety. If you click on thumbnails you open images that are hosted on this site - book Surgical Anatomy by Joseph Maclise.

You can find more on internet if you want to look, just search keywords like brachial, axillary, axillae, elbow, wrist. Here is description of inner side of upper arm (not concertning radial nerve)Upper arm: page Upper arm & shoulder. American death triangle. Description[edit] A two-point climbing anchor requires three carabiners: one at each fixed point and one at the "focal point" where the load is transferred to the climbing rope. 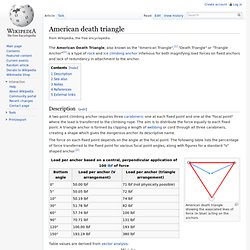 The aim is to distribute the force equally to each fixed point. A triangle anchor is formed by clipping a length of webbing or cord through all three carabiners, creating a shape which gives the dangerous anchor its descriptive name. The force on each fixed point depends on the angle at the focal point. The following table lists the percentage of force transferred to the fixed point for various focal point angles, along with figures for a standard "V" shaped anchor.[2] American death triangle showing the associated lines of force (in blue) acting on the anchors Table values are derived from vector analysis: For a V arrangement, For the Triangle, The load on the sling is the same in each example.

Aside from the magnification of forces, the death triangle violates several rules for building climbing anchors, including. Climbing Anchors. All anchors whether they are for belaying, top roping, or rappelling should adhere to the concept of S.R.E.N.E. 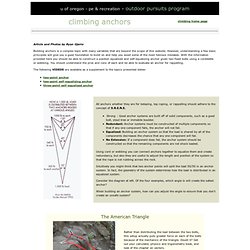 Strong: Good anchor systems are built off of solid components, such as a good bolt, stout tree or immobile boulder. Redundant: Anchor systems must be constructed of multiple components so that if any one component fails, the anchor will not fail. Equalized: Building an anchor system so that the load is shared by all of the components decreases the chance that any one component will fail. Vector Forces. Vector forces become apparent whenever there is an internal angle greater than 0° between two or more rigging components or anchorage points. 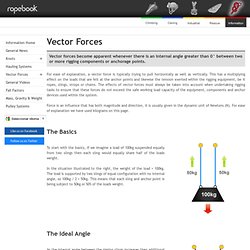 For ease of explanation, a vector force is typically trying to pull horizontally as well as vertically. This has a multiplying effect on the loads that are felt at the anchor points and likewise the tension exerted within the rigging equipment, be it ropes, slings, strops or chains. The effects of vector forces must always be taken into account when undertaking rigging tasks to ensure that these forces do not exceed the safe working load capacity of the equipment, components and anchor devices used within the system. Force is an influence that has both magnitude and direction, it is usually given in the dynamic unit of Newtons (N). 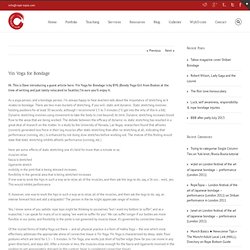 This is Dave introducing a guest article here. Yin Yoga for Bondage is by BYG (Bendy Yoga Girl from Boston at the time of writing and just lately relocated to Seattle) I’m sure you’ll enjoy it. As a yoga person, and a bondage person, I’m always happy to hear teachers talk about the importance of stretching as it relates to bondage. There are two main buckets of stretching, if you will: static and dynamic. Static stretching involves holding positions for at least 30 seconds, although I recommend 1.5 to 3 minutes (I’ll get into the why of this in a bit). Www.allropestied.com/downloads/ClaireAdams_Stretching_For_Bon.pdf. 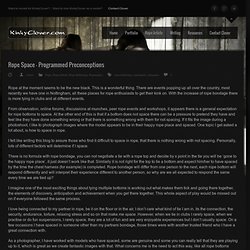 This is a wonderful thing. There are events popping up all over the country, most recently we have one in Nottingham, all these places for rope enthusiasts to get their kink on. With the increase of rope bondage there is more tying in clubs and at different events. From observation, online forums, discussions at munches, peer rope events and workshops, it appears there is a general expectation for rope bottoms to space. I felt like writing this blog to assure those who find it difficult to space in rope, that there is nothing wrong with not spacing.

There is no formula with rope bondage, you can not negotiate a tie with a rope top and decide by x point in the tie you will be ‘gone to the happy rope place’, it just doesn’t work like that. Poisonbeatrice: Advice for rope tops and bottoms. KinkyClover » My Rope Bottoming Essential Kit. My Rope Bottoming Essential Kit There are quite a few post around the various forums regarding keeping a rope bottom bag and what people would keep in it, while I don’t specifically have one, when at events etc. 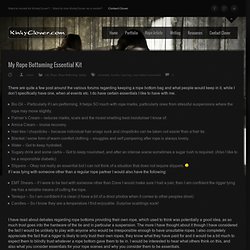 I do have certain essentials I like to have with me. Bio Oil – Particularly if I am performing, it helps SO much with rope marks, particularly ones from stressful suspensions where the rope may move slightly.Palmer’s Cream – reduces marks, scars and the nicest smelling best moisturiser I know of.Arnica Cream – bruise recovery.Hair ties / chopsticks – because individual hair snags suck and chopsticks can be taken out easier than a hair tie.Blanket / some form of warm comfort clothing – snuggles and self pampering after rope is always lovely.Water – Got to keep hydrated.Sugary drink and some carbs – Got to keep nourished, and after an intense scene sometimes a sugar rush is required. 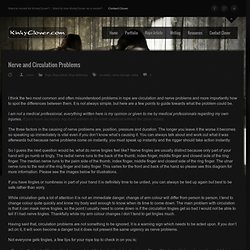 It is not always simple, but here are a few points to guide towards what the problem could be. I am not a medical professional, everything written here is my opinion or given to me by medical professionals regarding my own injuries. If you have an injury my best advice is to seek medical advice for your injury. Www.kinkfriendly.org/wp-content/uploads/2010/12/alternative_relationships_kinkfriendly_org.pdf. Www.kinkfriendly.org/wp-content/uploads/2010/12/kinkfriendly_org_speedy_gonzales.pdf. 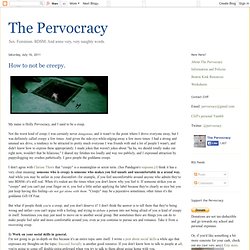 Not the worst kind of creep; I was certainly never dangerous, and it wasn't to the point where I drove everyone away, but I was definitely called creepy a few times. And given the side-eye-while-edging-away a few more times. I had a strong and unusual sex drive, a tendency to be attracted to pretty much everyone I was friends with and a lot of people I wasn't, and didn't know how to express these appropriately. I made jokes that weren't jokes about "ha ha, we should totally make out right now, wouldn't that be hilarious," I shared my fetishes too loudly and way too publicly, and I expressed attraction by puppydogging my crushes pathetically. I gave people the goddamn creeps. I don't agree with Clarisse Thorn that "creepy" is a meaningless or sexist term.

But what if people think you're a creep, and you don't deserve it? BioDigital Human: A better way to understand health and the human body! Advice for Rope Tops and Bottoms. After this second failing I realized there’s a lot of talk about how to tie, safety, design, preparing physically for going into ropes, preparing a space for it, etc, but not a lot of talk about caring for the actual relationship between rope top and rope bottom. 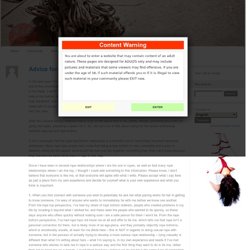 It isn’t necessary that the rope top/bottom relationship is a romantic one to need these important elements addressed. Many rope tops simply don’t know that being a rope bottom is very vulnerable and it pays to address caring for this aspect beyond just the time you are together, something they often can’t know because they themselves have never been in rope in this way. Since I have been in several rope relationships where I am the one in ropes, as well as had many rope relationships where I am the top, I thought I could add something to this information. Please know, I don’t believe that everyone is like me, or that everyone will agree with what I write. S – This stands for both sides, of course.

Do you have any nerve issues? The Restrained Elegance lexicon of slavegirl bondage poses and positions. Introduction The human body is capable of adopting an almost infinite variety of poses and positions. Some of these poses are awkward, ugly or ungainly- these are inappropriate for a Restrained Elegance slavegirl to adopt, for a Restrained Elegance slavegirl should be alluring, elegant and as beautiful as possible, whether in bondage or out of bondage. The following is a lexicon of named poses and positions, along with more general modifiers and descriptions which will aid Masters in specifying the position that they wish their slavegirl to adopt. Some are appropriate as a prelude to being tied, others are resting or stress positions which the slavegirl must adopt for her Master's edification, in order that she can be a fitting adornment or decoration to his realm.

Positions can be described in several different ways. Other descriptions refer to just part of the pose, and must be combined with other descriptions to completely specify the pose. Elbows Together also called Strappado Box Open. Www.kinkfriendly.org/wp-content/uploads/2010/12/kinkfriendly_org_rope_101_compressed.pdf. Downloads/tutorials/rope_bottom_guide.pdf.