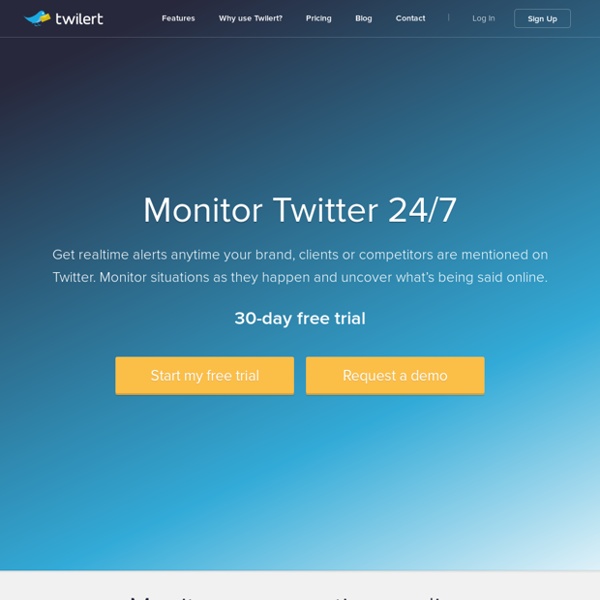 Clustering Engine Carrot2 Search Results Clustering Engine Carrot2 organizes your search results into topics. With an instant overview of what's available, you will quickly find what you're looking for. Choose where to search: Integrating Netvibes, Pipes, AideRSS, Dapper for an intelligence dashboard Earlier today, Sam shared his executive dashboard that keeps him on top of our market’s information flow. I thought I would share some of the more technical details about integrating Netvibes, Pipes, AideRSS, and Dapper to create his dashboard. Defining our objectives We started this project with me interviewing Sam about the feeds in his reader.

Should journalists confirm information before passing it along on Twitter? On Thursday many journalists unknowingly perpetuated a hoax that CNN had suspended Piers Morgan due to the British tabloid phone-hacking scandal, sparking a conversation about whether journalists need to slow down before tweeting. Others have chronicled the spread of the rumor, including TheNextWeb and Ross Neumann with a Storify. But as people were issuing mea culpas to their followers, Reuters’ Felix Salmon wrote a provocative post on his Tumblr blog, suggesting that Twitter is more like a newsroom than a newspaper. Rumors happen there [on Twitter], and then they get shot down — no harm no foul. … In the newsroom, we say things like “did you hear that Piers Morgan just got suspended?” and that’s fine. Is it really that bad to say that kind of thing in the newsroom called Twitter?

TweeTopi - Powerful Twitter Search & Share for iOS - 1.1.0 - FileDir.com Create and Share Twitter Realtime Search Settings with "TweeTopi". "TweeTopi" is the most powerful iPhone app that tracks keywords you want to know in Twitter realtime search. Twitter search result is filled with chaos and unwanted information. Top 5 Android Apps To Tweet Longer Than 140 Characters As we all know, popular micro-blogging phenomenon, Twitter, allows users post tweets up to just 140 characters long. If you wish to post a message longer than that, you’ll need to resort to other web apps, such as TwitLonger, TweetExtend, RichTweet, TMI.ME, JumboTweet and EZTweets etc. Just like the Twitter web service itself, its official Android client doesn’t let users post a tweet longer than the conventional 140-character mark. Worse yet, Android users don’t have the luxury of resorting to a standalone app to post longer tweets, either. Although the previously reviewed Tweet Longer For Twitter app emerged as a worthy candidate in this regard, it didn’t last long in the market, leaving Android users yearning for an alternative solution.

Downloads - voidtools Download Everything 1.4.1.877 Download InstallerDownload Installer 64-bitDownload Portable ZipDownload Portable Zip 64-bit ChangesWhat's NewOlder VersionsLicenseSHA256Supported LanguagesHelp All Everything Downloads 5 Tools To Monitor Website Changes Want to know when prices drop at shopping sites? When someone posts a new message in a forum? When your favorite website updates that is not offering an RSS feed? Facebook Tells Salman Rushdie He Has to Go By His Given Name, Ahmed Rushdie - Alexis Madrigal - Technology This is the sort of thing that makes you wonder what real names policy is all about. Today on Twitter, Salman Rushdie detailed his adventures with Facebook's name police. "Amazing. 2 days ago FB deactivated my page saying they didn't believe I was me.