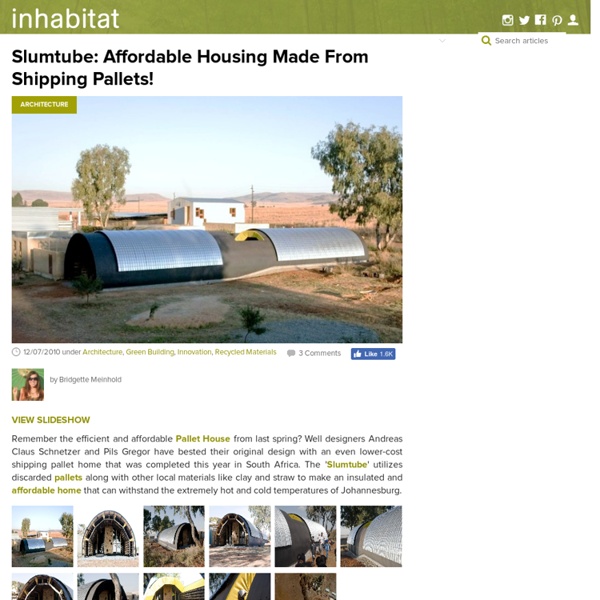 Remember the efficient and affordable Pallet House from last spring? Well designers Andreas Claus Schnetzer and Pils Gregor have bested their original design with an even lower-cost shipping pallet home that was completed this year in South Africa. The 'Slumtube' utilizes discarded pallets along with other local materials like clay and straw to make an insulated and affordable home that can withstand the extremely hot and cold temperatures of Johannesburg. Schnetzer and Gregor built upon what they learned from constructing modular pallet houses, improving upon their original design to make it even more affordable. In Johannesburg, temperatures can fluctuate from 45 degrees C in the summer to -2 degrees in the winter, and many homes are not equipped to keep residents comfortable. Slumtube transforms these pallets and other recycled materials into a semi-circular long houses that is insulated from heat and cold. + PalettenHaus Images © PalettenHaus Related:  Inspirations 1

Japanese House Built by Off Grid Champion - Brian Schulz The Japanese Forest House is a confluence of my love of small spaces, my passion for local materials, and my fascination with tradtional Japanese architecture. For those familiar with the intensely refined art of traditional Japanese carpentry, applying the title of 'Japanese' onto my house might be laying it on a bit thick. It's true I've fallen short of the refinement found in the homes of the upper classes, however, the work still embraces the design principles that make the traditonal tea houses (which were, ironically, modeled after peasant shacks) so appealing. With deep enough pockets a person might be able to duplicate such a structure by writing a large check to a talented builder, but that would risk missing the point entirely.

The charming $200 micro houses made from junk By Daily Mail Reporter Published: 01:49 GMT, 5 April 2012 | Updated: 20:37 GMT, 5 April 2012 Made from scavenged materials, Derek Diedricksen's tiny houses cost just $200 to make. What the little wooden dwellings lack in space, is made up for in style thanks to plenty of decorative detail. The 33-year-old uses parts of discarded household items to ensure each home has basic functions, the glass from the front of a washing machine is converted in a porthole-like window while a sheet of metal becomes a flip down counter. Made from scavenged materials, Derek Diedricksen's tiny houses cost just $200 to make The largest of his structures is the Gypsy Junker at 24 square feet with a roof height of up to 5ft 10inches The Gypsy Junker is made out of shipping pallets, castoff storm windows and discarded kitchen cabinets Ultimate in eco-friendly: Derek Diedricksen's homes are made from household goods 'I’ve always been obsessed with tiny architecture. 'The Hickshaw was the first one I built.'

Super modern South African tiny house is bright and green I have often complained that a lot of tiny houses, being modelled on larger houses that get the shrink-ray, are designed for cuteness instead of practicality, with their tiny lofts that peak in the middle. Perhaps instead of using a traditional house as a model, designers should be looking more at learning from more modern designs like Airstream trailers or boats. That's why the INDAWO / lifePOD is so interesting. This design by the South African team of Collaborate000 architects, and product designers Dokter and Missses is super modern, and very much a product of its climate. © Brett Rubin The INDAWO / lifePOD is a lifestyle and design intervention that affords home owners a comfortable, functional experience inside a small space; to live in confluence with the needs of the planet now and in the future .... “Living smaller will save you money in the long run; it could also make you happier.” © Pod Indawo

Bulletproof, fireproof, environmentally friendly homes are being made from plastic bottles The streets of downtown Toronto are vibrant and busy at all times of the day. During the day business women rapidly click their heels and talk a mile a minute into their cellphones. Students hustle off to school, their backpacks swaying from side to side and men with ties and briefcases flood the subway. It’s hard to notice anything besides the flashes of colour that blur together in your peripherals. At night the streets are calmer – people walk more slowly and everything is in focus. Obviously, homelessness is an issue that occurs in every corner of the world. © Andreas Froese/ECOTEC The two-bedroom bottle houses are built by filling the bottles with sand and then holding them together using mud and cement. According to Phys.org, the project was first initiated by Kaduna-based NGO Development Association for Renewable Energies (DARE), with help from London-based NGO Africa Community Trust. Sources: inspirationgreen.com, visualnews.com, ipsnews.net

Ex-Masterchef's Kathryn Minchew to open a restaurant in her garden SHED A former Masterchef contestant has been given the green light to open what will be one of the world’s smallest restaurants - in her own garden shed. Kathryn Minchew, 32, set up Gloucester Studio in a purpose-built hut in her Cotswolds garden 14 months ago, after reaching the semi-finals of the BBC1 cooking competition in 2008. She was given six months to see if the culinary business would work, beginning in January 2015, and says she had a great response from diners - despite the restaurant only being available for 'exclusive hire'. Scroll down for video Former Masterchef contestant Kathryn Minchew, 32, has set up a restaurant in her back garden in Gloucester Gloucester Studio can serve up to eight guests at a time, but with prices starting at £495, it's not cheap Kathryn has now been given permission to run her tiny eaterie in Gloucester as a fully-fledged restaurant, on a pre-booked basis for no more than eight diners at a time. Former Masterchef semi finalist builds her own MasterShed

Custom Living Tiny Home A custom tiny home built by Tiny Living Homes in Delta, British Columbia, Canada. Building Small Has a Big Payback Building Small Has a Big Payback by Sigi Koko Let's get one thing straight right away...When I say "small", I don't mean living in a shoe box. What I mean by "small" is living in a space that is designed...well designed...for your needs...and no more. A small space doesn't mean cramped. What makes a space feel comfortable is sizing appropriately for the intended use. For example, the nook above is in a house with kids. Why build small? Building to the size you need (and no more) offers many tangible benefits (besides feeling more comfortable and intimate). this is a mini strawbale cottage on an old 2-car garage footprint 4 design strategies So how to build smaller without feeling cramped? Below are 4 design strategies that make small spaces feel comfortable without feeling claustrophobic. 1. connect to outdoors One way to make a small space feel more expansive is to connect it visually and/or literally to the outdoors, using windows or glass doors. 2. excellent well-lit space Final Thoughts...

Refreshing 480sf Country Cottage With Room To Breathe - Tiny House for UsTiny House for Us This Blanco, Texas, dwelling is a great-looking example of a Kanga Room Systems cabin with all the options. The 480-square-foot house has a 16′ x 30′ footprint and comes with a full-length covered front porch plus an eight-foot screened porch on one side, as well as a complete kitchen and stylish full bathroom. When you don’t feel like hanging out on the porches, a peaked roof and two ceiling fans keep the air circulating during muggy weather. The front porch adds precious square footage that comes in handy on a smaller house like this. Kitchen storage seems to be mostly left up to the occupant rather than built in. Aside from leaving space for the fans, the high ceiling results in standing room in the loft and a living area that’s positively stately. No worries about hitting your head in the spacious sleeping loft. Well chosen tiles and fixtures make for a modern yet traditional bathroom. With its own fan, the screen porch looks like a great place to unwind on hot nights.