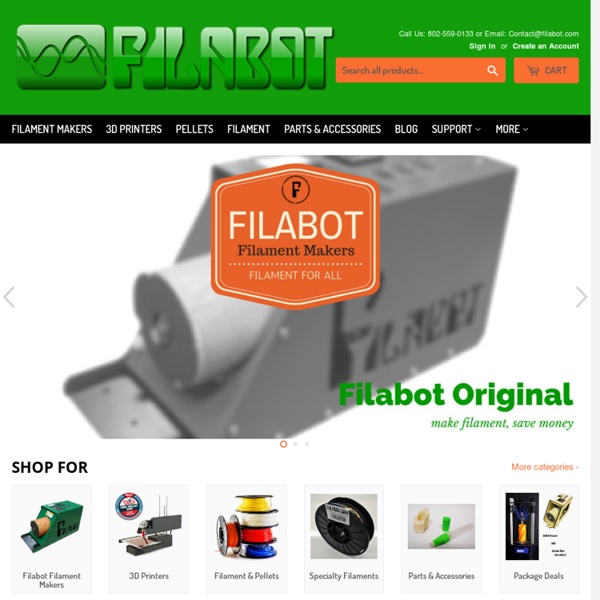 The Audacious Plan to End Hunger With 3D-Printed Food Uber is slavery…Uber will add to traffic congestion…Uber destroys the savings of cab drivers… Hold the litany. Is this the incumbency speaking? And my name isn’t Marie Antoinette. I might get in trouble for this, but I’d like to add a drop of customer experience into the boiling broth of opinions about Uber. No warranties expressed or implied, my perspective is a limited one. After five decades of riding in taxis, both in my native Paris and my adopted Bay Area, I’ve had my share of interesting and sympathetic cabbies, most of whom are more than willing to share their life stories.

Solido 3D Printers & Supplies: CAD Model Rapid Prototyping for Product Design Engineers Introducing the SD300 Pro by Solido: Print your solid model design concepts with an affordable high quality rapid prototyping 3D Printer- for product and part design engineers 3D Printing for Rapid Prototyping of Solid Model Design Concepts Made Easy Solido SD300 3D Printers for rapid prototyping allow you to build your 3D solid model designs right at your desktop according to standard 3D CAD software specifications. My version of the LYMAN FILAMENT EXTRUDER by bottleworks These files are posted to give some ideas to those who are making an extruder. This is by no means a "how to" or anything of the sort. The STL and sketchup files are included.

The Difference Between ABS and PLA for 3D Printing This entry was posted on January 27, 2013 by Luke Chilson. You've got a 3D Printer, or you're looking to buy a 3D Printer and each one seems to indicate it prints in either ABS, PLA, or both. So you find yourself wanting to know, what is the difference between ABS and PLA. Some Common Ground There are many materials that are being explored for 3D Printing, however you will find that the two dominant plastics are ABS and PLA. Both ABS and PLA are known as thermoplastics; that is they become soft and moldable when heated and return to a solid when cooled.

Mataerial: a 3D printer that seemingly defies gravity You might think that 3D printing is a mature technology , the way guns and pizzas and pieces of jet engines are popping out these days, but you haven't seen it all: a company called Mataerial has built a contraption that can print gravity-defying strands of material right onto a wall. Where existing 3D printers deposit tiny beads of melted plastic ( FDM ), solidify resin with ultraviolet light ( stereolithography ), or fuse powered material with laser beams ( SLS ) to form a part, these technologies typically require a flat tray where the work is done. Not Metaerial: because the robot arm deposits a mix of thermoset polymers (the company's not saying which ones) that harden at the exact same time they're pushed out the tip of the extruder, it can appear to generate threads right out of thin air. The company claims its printer can even print an object in multiple colors simultaneously, by injecting colored dye mid-strand.

mUVe 1 3D Printer The mUVe 1 3D printer is bridging the gap between the hobbyist maker and the high-price resin printers that are currently out of their reach. The mUVe 1 uses a standard 405nm UV laser diode and a 3 axis CNC system to bring all of your high-resolution 3D models to life. When we set out to design a 3D printer we needed it to be as open and upgradable as possible, but it still had to offer great features at a great price. The mUVe 1 is completely open, we share everything, the designs, the software, all of it! On top of it all we still manage to do it for less money than anyone else, and it’s extremely energy efficient with only 25 watts of power consumption on average.

The Lyman Filament Extruder May Drop the Cost of Desktop 3D Printing Forever The Desktop Factory Competition launched in June 2012 challenged makers to design a cheap, open source method to turn plastic pellets (which sell for $10 kg) into filament suitable for a desktop 3D printer (that currently sells for $50 per kg). 83 Year old inventor Hugh Lyman developed the Lyman Filament Extruder II which for under $250 in parts can take standard plastic ABS pellets and squeeze them into filament. The fact that this device is released as open source hardware means that others can modify and improve the mechanism to lower the cost and increase the efficiency, just as we have seen with the open source desktop 3D printers based on the RepRap. The speed of innovation in the open source 3D printing world is making many of the large industrial 3D printer manufacturers appear to be moving in slow motion.

Printed Solid – Helping you make the future, one layer at a time. » colorFabb woodfill filament People who have experience in 3D Printing and other kinds of polymer processing will tell you that not all materials are the same. PLA from one source is not the same as PLA from another. Material, environment, and process conditions all make a big difference in the end product. That’s true for all filaments, but it’s even more significant with wood filaments. colorFabb woodfill is a new type of wood filament for 3D printing. Stereolithography: The Science behind 3D Printing Recreating entire 3D objects directly from the virtual space of a computer to real life is a reality made possible by a number of different technologies. This article will focus on the one 3D printing technology that enjoys the upsides of speed, precision, and thanks to breakthroughs in design, affordability. Stereolithography, or SLA in shorthand, is essentially what the industry calls an “additive manufacturing process” as opposed to traditional methods of “subtractive manufacturing”. The former creates products through adding layers of a material, while the latter creates products through removing parts of a material.

Food Grade Filament (Save 10% with Coupon Code SPRING - if we sell it you can save 10% with our HUGE Spring Sale - Ends SOON!) 3D Printing Facts, Tips, Tricks & Other Bottom of the Page Nuggets from MakerGeeks.com What Temperature to 3D Print your Filament at? 83-year-old inventor wins $40,000 award for his DIY filament extruder Mar.4, 2013 On March 2, 2013 Zach Kaplan, CEO of online store Inventables, presents a giant check to inventor and competition winner Hugh Lyman. Inventables, the Kauffman Foundation and Maker Faire announced in May 2012 the launch of The Desktop Factory Competition - each team is required to design an open source machine capable of making plastic resin pellets fit for use in a low cost 3D printer. The purpose of this competition is to drive down the cost of filament by creating a new filament extruder. Currently the cost of plastic filament is $30~50/kg, by creating such a new machine the organizers seek to make the filament price drop to around $5. The first one who uploads a solution will be the winner -The first team/person to build an open source filament extruder for less than $250 in components can take ABS or PLA resin pellets, mix them with colorant, and extrude a 1.75mm +/- .01mm filament that can be used in a 3D printer is declared the winner.

Creating 3D Printed Happiness : Building a Prusa i3 RepRap Since the arrival of a MakerBot Replicator 2 at the Jam3 office in January, I’ve been 3D printing quick prototypes for work and personal projects. There are some amazing 3D models you can download and print off Thingiverse, but I’ve found it’s more rewarding to break out the digital calipers and create your own models in SketchUp. The Replicator 2 has its quirks. The build plate needs to be leveled before each print if you want a quality output.

This Mind-Controlled 3-D Printer Generates Creatures From Your Kid's Brainwaves When Bryan Salt, a creative director from the U.K., was a kid, he would dream "of a machine that could create real objects from thought alone: to imagine a thing and it would appear in front of me ready made." Salt is working to make that dream a reality with his Chile-based startup Thinker Thing, which is in the process of creating a system called the Monster Dreamer that can generate 3-D models of creatures built from children’s brainwave data via a sensor-equipped headset. From there, those objects are easily realized in plastic with a MakerBot. I caught up with Salt over Facebook chat, and he explained how exactly Thinker Thing is able to create 3-D models by reading brain waves.