Graphene Is The Strongest Material In The World Even When It Has Defects, Research Finds 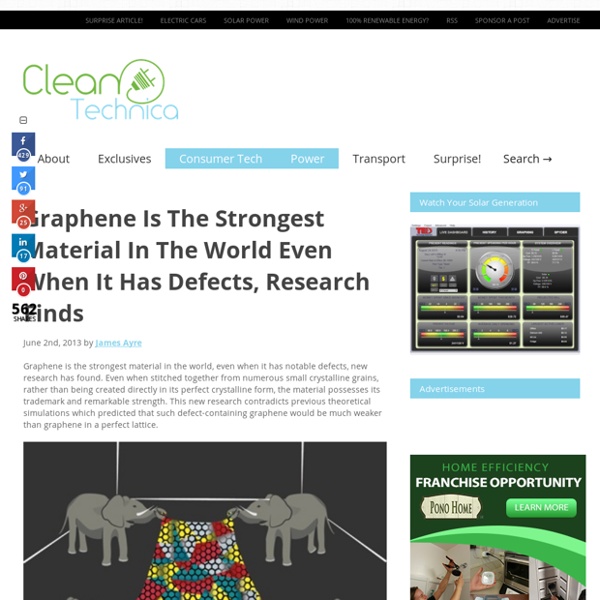 Clean Power Published on June 2nd, 2013 | by James Ayre June 2nd, 2013 by James Ayre Graphene is the strongest material in the world, even when it has notable defects, new research has found. Image Credit: Illustration by Andrew Shea for Columbia Engineering It’s been said that graphene is so strong that “it would take an elephant, balanced on a pencil, to break through a sheet of graphene the thickness of Saran Wrap.” Graphene is — essentially — just a single atomic layer of carbon that is structured as a honeycomb lattice. The new research corrects the mistaken belief that defects present in graphene are the cause of the extremely low strength seen in some previous studies — the lowered strength is actually the result of the methods used for post-processing CVD-grown graphene. “We substituted a different etchant and were able to create test samples without harming the graphene,” states the paper’s lead author, Gwan-Hyoung Lee, a postdoctoral fellow in the Hone lab. About the Author Related:  Material Science • Materials Science

What is graphene? Here’s what you need to know about a material that could be the next silicon Graphene, an emerging material that could change the way electronic components are made and help computing performance continue to grow, is everywhere in the research world these days. This month alone, advancements suggested it could boost internet speeds, serve as a touch sensitive coating and extend the lives of computers. It is stronger than diamond and conducts electricity and heat better than any material ever discovered, and it will likely play an important role in many products and processes in the future. What is graphene? Graphene is made of a single layer of carbon atoms that are bonded together in a repeating pattern of hexagons. Carbon is an incredibly versatile element. These single layers of carbon atoms provide the foundation for other important materials. How was it discovered? Chances are good that you have made graphene many times in your life. Graphene was first studied theoretically in the 1940s. Why is it unusual? What can it be used for? What are the critiques?

Scientists transform cement into liquid metal It's not the same as turning lead into gold, but scientists at the Illinois-based Argonne National Laboratory and the Japan Synchrotron Radiation Research Institute/SPring-8 have developed a method for turning cement into a liquid metal semiconductor. The process sounds like a mad scientist's invention. It involves equipment like an aerodynamic levitator and a carbon dioxide laser beam. The levitator uses gas pressure to keep the material out of contact with any container surfaces. The carbon dioxide laser beam can heat the material to 3,632 degrees Fahrenheit. The material in question is mayenite, a calcium aluminum oxide material that is part of alimuna cement. "This new material has lots of applications, including as thin-film resistors used in liquid-crystal displays, basically the flat panel computer monitor that you are probably reading this from at the moment," Argonne physicist Chris Benmore said Monday in a statement. Score one for modern alchemy.

Liquid metal brings shape-shifting robot a step closer - tech - 10 March 2015 Video: Self-fuelled liquid metal motor Hasta la vista, baby. A real-life T-1000, the shape-shifting liquid-metal robot from Terminator 2, is a step closer, thanks to a self-powered liquid metal motor. The device is surprisingly simple: just a drop of metal alloy made mostly of gallium – which is liquid at just under 30 °C – with some indium and tin mixed in. When placed in a solution of sodium hydroxide, or even brine, and kept in contact with a flake of aluminium for "fuel", it moves around for about an hour. "The soft machine looks rather intelligent and [can] deform itself according to the space it voyages in, just like [the] Terminator does from the science-fiction film," says Jing Liu from Tsinghua University in Beijing, China. When they first saw the drop move, Liu and colleagues weren't sure how it was able to do so. Other researchers have shown that a stationary gallium drop can act as a pump when in an electric field. More From New Scientist ISIS is waging war on history.

New form of carbon said to be strongest material ever found The strongest known material in the world may have just been dethroned. Researchers from Rice University have calculated the properties of a little-studied form of carbon known as carbyne, and they've determined that it should have a "specific strength surpassing that of any other known material." That includes graphene — the longstanding titleholder for strongest material — which the researchers say is only half as stiff as carbyne. Carbyne and graphene are actually alike in several ways: both come from carbon, and both are only a single atom thick. Carbyne has previously been detected in interstellar dust and meteorites.

ANV4 - Albion Hersir Viking Sword - $1,405.00 This style of Viking era sword is the most prominent hilt type found on swords from the viking age and span a time period from late 8th C to late 10th C. On elaborate swords, the hilts were damascened with wire inlays of copper alloys, tin and silver. A few were left plain relying on the subtle effect of a well defined and polished iron surface. The blade is defined by a moderate taper in width and a fuller that taper in width towards the point. The type can be dated to the period between second half of the 8th C to the second half of the 10th C. Many of the famous Ulfberht swords are forged to this form. The pommel and upper guard of Albion’s Hersir are made in two parts, riveted together, with a twisted sterling silver wire between the the pommel and upper guard. The Knud has a hand-ground high carbon steel blade that is tempered for flexibility and edge retention. The sword grip comes in a selection of colors, please select an option below.

Researchers spin a yarn into a muscle An unusually simple approach to artificial muscles – based on high-strength polymer fibres – has been developed by an international team of researchers. Rather than needing sophisticated or expensive materials, the muscles can be produced from simple polymers that are used to make fishing-line or sewing threads. When heated, these fibres can shorten or lengthen far more than biological muscle, and could be used for applications as diverse as temperature-sensitive window shutters, "smart" clothing and robotics. Synthetic sinew Materials that expand and contract in response to some form of stimulus are useful for robotics, where they are used to make "actuators" or artificial muscle fibres, and on smaller scales where they can produce sensors for lab-on-a-chip devices. In the new research, Ray Baughman and colleagues at the University of Texas at Dallas, together with collaborators in Canada, South Korea, Turkey, China and New South Wales in Australia, took a simpler tack. Twisted tendons

Scientists discover whole new state of matter Most people are familiar with some of the common states of matter: solids, liquids and gases. Scientists also recognize a fourth state of matter — plasma — that is commonly observable here on Earth, as well as a host of other states that can only be created in the lab, such as Bose–Einstein condensates and neutron-degenerate matter. Jahn-Teller metals can now be added to this list, a state which appears to have the properties of an insulator, superconductor, metal and magnet all wrapped into one. It's the material's superconductivity which might be the most interesting trait, however. It has the potential to achieve superconductivity at a relatively high critical temperature ("high" as in -135 degrees Celsius as opposed to the sub -243.2 degrees Celsius required by many ordinary metallic superconductors), which is significant for the science of superconductivity. Related on MNN:

How do you manufacture huge amounts of graphene for a fraction of the cost? Printing presses Graphene, a one-atom-thick sheet of carbon atoms with amazing physical properties, could carry the digital world into an age beyond silicon. But it might be helped along by a technique borrowed from something quite analog: the newspaper printing press. Earlier this month, the National Science Foundation awarded University of Pennsylvania graphene startup Graphene Frontiers $744,600 to develop technology that makes it faster and cheaper to produce graphene on a large scale. I recently caught up with CEO Michael Patterson who described how roll-to-roll manufacturing will enable graphene to make its entrance into the big industries. Roll-to-roll manufacturing could allow graphene to be made at large scales. In 2010, it cost tens of thousands of dollars to manufacture a piece of graphene smaller than a postage stamp. Graphene Frontiers’ big contribution is that its method works at normal pressure, negating the need to make graphene in a vacuum. A sheet of graphene.

Graphene Gives You Infrared Vision in a Contact Lens It sounds like something from a spy thriller movie: putting on a contact lens that gives you infrared vision without the need for a bulky contraption that covers your face. But now, thanks to research at the University of Michigan, such a contact lens is a real possibility. The Michigan researchers turned to the optical capabilities of graphene to create their infrared contact lens. IBM last year demonstrated some of the photoconductivity mechanisms of graphene that make it an attractive infrared detector. Graphene is capable of detecting the entire infrared spectrum, with visible and ultraviolet light thrown in. "The challenge for the current generation of graphene-based detectors is that their sensitivity is typically very poor," said Zhaohui Zhong, assistant professor at the University of Michigan, in a press release. To achieve this amplification, the researchers started by sandwiching an insulator between two sheets of graphene.