This Is How Teens Are Using Social Media 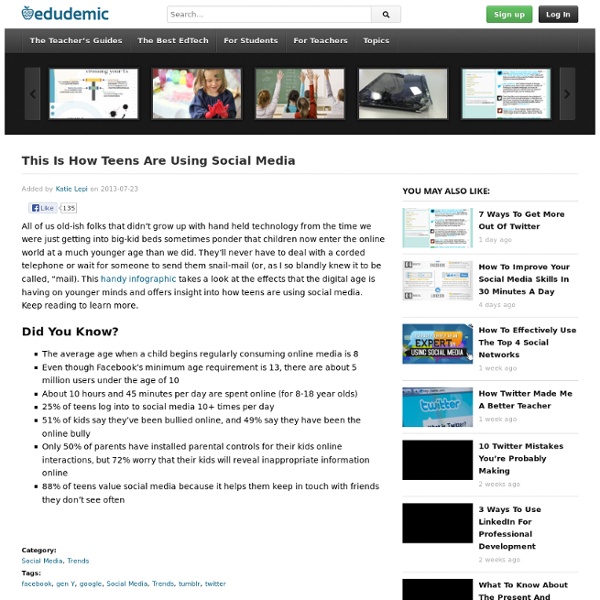 All of us old-ish folks that didn’t grow up with hand held technology from the time we were just getting into big-kid beds sometimes ponder that children now enter the online world at a much younger age than we did. They’ll never have to deal with a corded telephone or wait for someone to send them snail-mail (or, as I so blandly knew it to be called, “mail). This handy infographic takes a look at the effects that the digital age is having on younger minds and offers insight into how teens are using social media. Keep reading to learn more. Related:  Background Reading Material on Social Media • EFL • Social Networking

Kids of the Internet Generation vs. Everybody Else [INFOGRAPHIC] They don’t make them like they used to, right? Kids these days have grown accustomed to many luxuries that just weren’t around a few decades ago, namely new tech gadgets. Are they better off for it? While kids used to head outdoors when they wanted to play, children today are 6 times more likely to be playing video games than riding bikes! In fact, cycling is down 31% since 1995. So I ask you: Is the Internet strengthening our children or inhibiting their growth? I’m an 80s kid, and I’ve spent 76 of the last 76 straight hours plugged in.

KWestions for Michael Staton of Inigral Yesterday evening, I was one lucky education blogger when Michael Staton, CEO and co-founder of Inigral made the time and agreed to do a KWestions interview. I’m happy to share the exciting news as one of the first with you. Inigral, sometimes called the Facebook of Higher Education, are now partner of the Bill and Melinda Gates foundation. Michael having an educational background himself, experienced the struggle many freshmen have when they’re just about to start college at first hand. Its main and shared objectives with the Gates Foundation is to considerably lower the drop out rates of students during their first year at university and to empower students from low income families as well as first generation graduates. It was a delight talking with Michael and to experience his passion for what he does what I feel makes a significant difference as an entrepreneur and contributes massively to the success of an idea and therefore a company. Related Links:

5 Amazing Ways To Collaborate With Another Class “Ms. Clark, when are we going to do that again?” Nothing makes me happier as an educator than hearing those words – and lately, I have been hearing them a lot! It is not the question, as much as the look on the faces of my students, that I enjoy the most. As we began our journey, some of our classes had 1:1 iPads, but others did not. If collaboration is something that interests you – and it should - here are five easy and highly engaging ways you can begin (or even improve) your journey. 1. If you have not heard of a Mystery Skype yet – stop what you are doing and read this amazing blog post by a really innovative educator Craig Badura ( @mrbadura ) from Nebraska. In this scenario, kids get to apply and use geographical knowledge, critical thinking, and the skill of deduction. Tip: The world is your oyster with this type of project. 2. I think most educators see the value in having students within their own class collaborate on a Google Doc – but it is time to think bigger! 3. 4. 5.

Six examples of brilliant marketing creative to enjoy with your coffee Here on the Econsultancy blog, we’re going to start teasing you with details of the week-long siren of excellence and japes that is the Festival of Marketing (8-10th October in London). One of the many components of the Festival is PUNCH, the event where marketing meets the new creative. To quote our website, ‘in today’s increasingly saturated media landscape, creative power matters more than ever’. So, to celebrate this event, and to give you something pretty to look at while you let your mind wander, I’ve listed some of my favourites in the world of creative in marketing. Social Tacobell In the words of David, our intern, Taco Bell’s Twitter account ‘doesn’t feed out generic, bland, and often repetitive info’. Instead, those with the keys to the Taco Bell account engage in a mesmerising mix of humour and hyper engagement, crucially targeting a young demographic in a way that no other fast food joints have mastered. Guerrilla(esque) Video Their videos are great and fairly low-fi. Out of home

ANSWERED: The 5 Biggest Early Childhood Education Questions You probably don’t need to be told that very young children today are quite adept at using technology – and perhaps more at ease with it than their parents are! While their elementary and secondary school counterparts are making moves towards BYOD and 1:1 classroom scenarios, what is happening with our youngest generation? This handy infographic takes a look at technology in the early childhood education classroom to see what’s happening there and attempts to answer the biggest early childhood questions. 93% of teachers use desktops or laptops 34% use tablets and other handheld devices 55% use interactive whiteboards 52% of teachers say their students are using technology every day of the week For those not using technology, funding was the major concern Only 4% said that they didn’t see value in using technology with students of this age

Tim Cope: Hangout from Kharkhiraa-Turgen Mountains of Mongolia Converged Media with Jeremiah Owyang of Altimeter Group The Evolution of Classroom Technology Classrooms have come a long way. There’s been an exponential growth in educational technology advancement over the past few years. From overhead projectors to iPads, it’s important to understand not only what’s coming next but also where it all started. We’ve certainly come a long way but some things seem hauntingly similar to many years ago. Also in 1925, there were “schools of the air” that delivered lessons to millions of students simultaneously. Here’s a brief look at the evolution of classroom technology. c. 1650 – The Horn-Book Wooden paddles with printed lessons were popular in the colonial era. c. 1850 – 1870 – Ferule This is a pointer and also a corporal punishment device. 1870 – Magic Lantern The precursor to a slide projector, the ‘magic lantern’ projected images printed on glass plates and showed them in darkened rooms to students. c. 1890 – School Slate c. 1890 – Chalkboard c. 1900 – Pencil c. 1905 – Stereoscope c. 1925 – Film Projector c. 1925 – Radio c. 1930 – Overhead Projector

7 Questions To Ask Yourself Before Sharing Photos Online Digital citizenship is one of the big things we talk about on Edudemic . It’s basically being a good person online. Being a good person involves a lot more than just not spamming or trolling, mind you. This must-have flowchart from Common Sense Media lays it all out in an easy-to-read format. The following steps should make you think and perhaps even rethink how you act online. Click here to download a printable PDF of this poster. The Teacher's Guide to Social Media Education is a two-way street — oftentimes, those who teach could stand to learn a few things as well. Social media, for one, is largely dominated by Generation Y. We invented it, we grew up with it and we know it like the back of our keyboard-ready hands. In some schools, tablets and social networks are becoming primary classroom tools. Don't sweat it. Are you an educator? 1. We've published plenty of horror stories about teachers who've posted NSFW content on their social profiles and have been summarily punished (see: the Aurora, Colo. teacher who tweeted half-naked photos of herself and joked about using drugs on school property). Whatever (legal things) you choose to do outside school is your business — just be sure to not give your colleagues (and students) a front-row seat. 2. GIF: Tumblr, HayleysSavedGIFs Tommy Mayhem may have sprayed you with spitballs the first day of class, but that doesn't mean you should vent about it online. This applies to other professions, too. 3. 4. 5. 6.