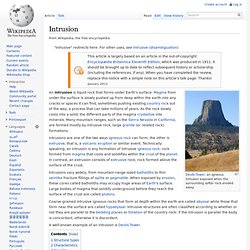 A well-known example of an intrusion is Devils Tower. Structural types[edit] Diagram showing various types of igneous intrusion. Intrusions can be classified according to the shape and size of the intrusive body and its relation to the other formations into which it intrudes: Batholith: a large irregular discordant intrusion Laccolith: concordant body with roughly flat base and convex top, usually with a feeder pipe below Lopolith: concordant body with roughly flat top and a shallow convex base, may have a feeder dike or pipe below Phacolith: a concordant lens-shaped pluton that typically occupies the crest of an anticline or trough of a syncline Volcanic pipe or volcanic neck: tubular roughly vertical body that may have been a feeder vent for a volcano Characteristics[edit] Deep-seated intrusions are recognized from the way they have burst through the overlaying strata.

Bushveld. Rhyacian. The Bushveld Complex and other similar intrusions formed during this period.[2] The Huronian (Makganyene) global glaciation began at the start of the Rhyacian and lasted until 2200 Mya[3] The first known eukaryotes began to evolve in the Rhyacian period. 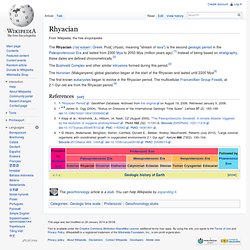 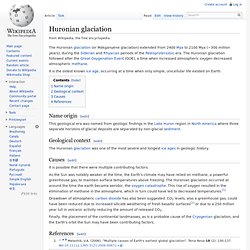 The Huronian glaciation followed after the Great Oxygenation Event (GOE), a time when increased atmospheric oxygen decreased atmospheric methane. It is the oldest known ice age, occurring at a time when only simple, unicellular life existed on Earth. Name origin[edit] This geological era was named from geologic findings in the Lake Huron region in North America where three separate horizons of glacial deposits are separated by non-glacial sediment. Geological context[edit] Eukaryote. Eukaryotes can reproduce both asexually through mitosis and sexually through meiosis and gamete fusion. 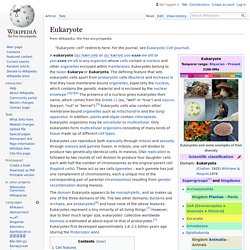 In mitosis, one cell divides to produce two genetically identical cells. In meiosis, DNA replication is followed by two rounds of cell division to produce four daughter cells each with half the number of chromosomes as the original parent cell (haploid cells). These act as sex cells (gametes – each gamete has just one complement of chromosomes, each a unique mix of the corresponding pair of parental chromosomes) resulting from genetic recombination during meiosis. Cell features[edit] Eukaryotic cells are typically much larger than those of prokaryotes. Internal membrane[edit] Detail of the endomembrane system and its components A 3D rendering of an animal cell cut in half.

The nucleus is surrounded by a double membrane (commonly referred to as a nuclear membrane or nuclear envelope), with pores that allow material to move in and out. Vesicles may be specialized for various purposes. Francevillian Group Fossil. The Francevillian Group Fossil is representative of Palaeoproterozoic, macroscopic organisms which were roughly centimeter-sized, highly organized, spatially discrete, and which formed colonies. 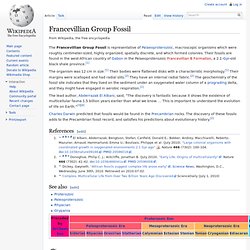 Their fossils are found in the west-African country of Gabon in the Palaeoproterozoic Francevillian B Formation, a 2.1-Gyr-old black shale province.[1] The organism was 12 cm in size.[1] Their bodies were flattened disks with a characteristic morphology.[1] Their margins were scalloped and had radial slits.[2] They have an internal radial fabric.[2] The geochemistry of the fossil site indicates that they lived on the sediment under an oxygenated water column of a prograding delta, and they might have engaged in aerobic respiration.[1] The lead author, Abderrazak El Albani, said, “The discovery is fantastic because it shows the existence of multicellular fauna 1.5 billion years earlier than what we know. … This is important to understand the evolution of life on Earth.”[3][4] Cyanobacteria. By producing oxygen as a gas as a by-product of photosynthesis, cyanobacteria are thought to have converted the early reducing atmosphere into an oxidizing one, which dramatically changed the composition of life forms on Earth by stimulating biodiversity and leading to the near-extinction of oxygen-intolerant organisms. 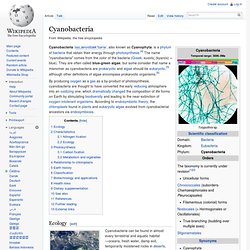 According to endosymbiotic theory, the chloroplasts found in plants and eukaryotic algae evolved from cyanobacterial ancestors via endosymbiosis. Ecology[edit] A cyanobacteria bloom near Fiji Aquatic cyanobacteria are known for their extensive and highly visible blooms that can form in both freshwater and marine environments. Crown eukaryotes. Crown eukaryotes are an artificial group of eukaryotic organisms found at the top of molecular phylogenetic trees including both eukaryotes and prokaryotes. 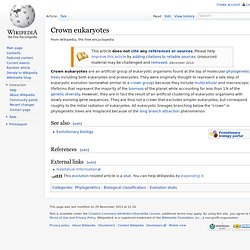 They were originally thought to represent a late step of eukaryotic evolution (somewhat similar to a crown group) because they include multicellular and macroscopic lifeforms that represent the majority of the biomass of the planet while accounting for less than 1% of the genetic diversity. However, they are in fact the result of an artificial clustering of eukaryotic organisms with slowly evolving gene sequences. They are thus not a crown that excludes simpler eukaryotes, but correspond roughly to the initial radiation of eukaryotes. All eukaryotic lineages branching below the "crown" in phylogenetic trees are misplaced because of the long branch attraction phenomenon.