Dig at Curtain Theatre which hosted William Shakespeare plays reveals unusual rectangular shape. They may have been penned around 450 years ago, but Shakespeare's plays about love and loss remain just as popular today. 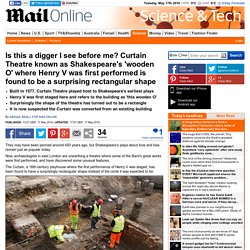 Now, archaeologists in east London are unearthing a theatre where some of the Bard's great works were first performed, and have discovered some unusual features. The Curtain, a 16th-century playhouse where the first performance of Henry V was staged, has been found to have a surprisingly rectangular shape instead of the circle it was expected to be. Archaeologists work on the exposed remains as the site of Shakespeare's Curtain Theatre is excavated in Shoreditch in London.

The archaeologists are excavating the remains of the Curtain, a 16th-century theatre where some of the Bard's play's were staged Built in 1577, the Curtain Theatre played host to Shakespeare's earliest plays including the first performances of Henry V and early performances of Romeo and Juliet. The dig has revealed the venue was not round, like most Elizabethan playhouses, instead it was rectangular. Why Elizabethan England was obsessed with Islam. 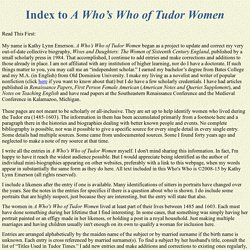 A Who’s Who of Tudor Women began as a project to update and correct my very out-of-date collective biography, Wives and Daughters: The Women of Sixteenth Century England, published by a small scholarly press in 1984. That accomplished, I continue to add entries and make corrections and additions to those already in place. I am not affiliated with any institution of higher learning, nor do I have a doctorate. If such things matter to you, you may call me an “independent scholar.” These pages are not meant to be scholarly or all-inclusive. I write all the entries in A Who's Who of Tudor Women myself. I include a likeness after the entry if one is available. The women in A Who's Who of Tudor Women lived at least part of their lives between 1485 and 1603.

Entries are arranged alphabetically by the maiden name of the subject or by married surname if the birth name is unknown. How the Who's Who Came to Be: Titles used in Tudor Times: The Clarendon historical society's reprints. Se... The historical Rough Guide to everywhere: 16th century book mapping major cities is reprinted. By Daily Mail Reporter Updated: 09:09 GMT, 14 April 2011 For the 16th century man trying to get around town it was as useful as Google Earth or a sat-nav. 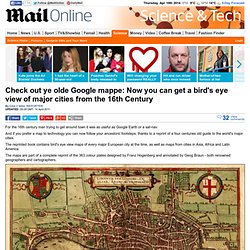 And if you prefer a map to technology you can now follow your ancestors' footsteps, thanks to a reprint of a four centuries old guide to the world's major cities. The reprinted book contains bird's eye view maps of every major European city at the time, as well as maps from cities in Asia, Africa and Latin America. The maps are part of a complete reprint of the 363 colour plates designed by Franz Hogenberg and annotated by Geog Braun - both renowned geographers and cartographers.

The jousting accident that turned Henry VIII into a tyrant - This Britain, UK. After the accident – just before he became estranged from the second of his six wives, Anne Boleyn – the king, once sporty and generous, became cruel, vicious and paranoid, his subjects began talking about him in a new way, and the turnover of his wives speeded up. 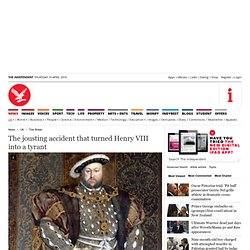 The accident occurred at a tournament at Greenwich Palace on 24 January 1536 when 44-year-old Henry, in full armour, was thrown from his horse, itself armoured, which then fell on top of him. He was unconscious for two hours and was thought at first to have been fatally injured. But, although he recovered, the incident, which ended his jousting career, aggravated serious leg problems which plagued him for the rest of his life, and may well have caused an undetected brain injury which profoundly affected his personality, according to the History Channel documentary Inside the Body of Henry VIII. However, Henry had started out with excellent health as a young man, being universally admired for his manly physique.