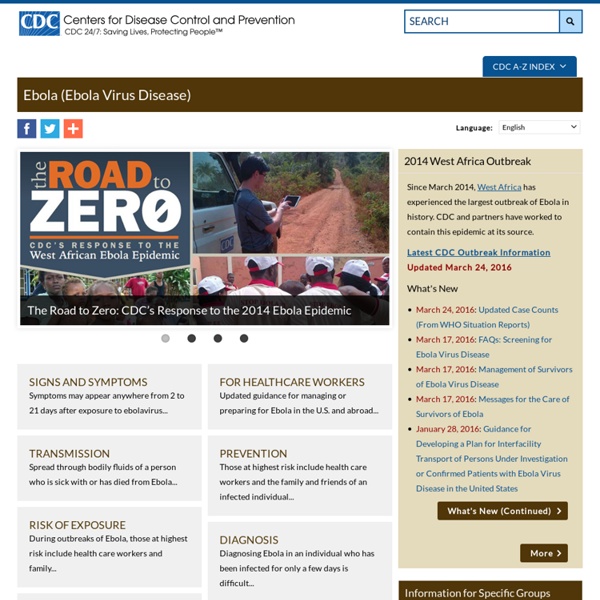 The Black Death, 1348 The Black Death, 1348 Coming out of the East, the Black Death reached the shores of Italy in the spring of 1348 unleashing a rampage of death across Europe unprecedented in recorded history. By the time the epidemic played itself out three years later, anywhere between 25% and 50% of Europe's population had fallen victim to the pestilence. Ebola Fast Facts Facts:Ebola hemorrhagic fever is a disease caused by one of five different Ebola viruses. Four of the strains can cause severe illness in humans and animals. The fifth, Reston virus, has caused illness in some animals, but not in humans. Ebola is extremely infectious but not extremely contagious. It is infectious, because an infinitesimally small amount can cause illness.

Ebola: Mapping the outbreak The Ebola outbreak in West Africa was first reported in March 2014, and rapidly became the deadliest occurrence of the disease since its discovery in 1976. In fact, the epidemic killed five times more than all other known Ebola outbreaks combined. More than 21 months on from the first confirmed case recorded on 23 March 2014, 11,315 people have been reported as having died from the disease in six countries; Liberia, Guinea, Sierra Leone, Nigeria, the US and Mali. The total number of reported cases is about 28,637. But on 13 January, 2016, the World Health Organisation declared the last of the countries affected, Liberia, to be Ebola-free.

Medieval “Black Death” Was Airborne, Scientists Say - History in the Headlines Print Cite Article Details:Medieval “Black Death” Was Airborne, Scientists Say Author Sarah Pruitt Website Name History.com Year Published 2014 Title Medieval “Black Death” Was Airborne, Scientists Say URL Access Date March 25, 2016 Publisher A+E Networks The so-called Black Death arrived in Britain from central Asia in the autumn of 1348. Believed to be bubonic plague, spread by infected fleas carried on rats, the disease swept through Europe over the better part of the next year. Was Ebola Behind the Black Death? Controversial new research suggests that contrary to the history books, the "Black Death" that devastated medieval Europe was not the bubonic plague, but rather an Ebola-like virus. History books have long taught the Black Death, which wiped out a quarter of Europe's population in the Middle Ages, was caused by bubonic plague, spread by infected fleas that lived on black rats. But new research in England suggests the killer was actually an Ebola-like virus transmitted directly from person to person. The Black Death killed some 25 million Europeans in a devastating outbreak between 1347 and 1352, and then reappeared periodically for more than 300 years.

Ebola virus: 9 things to know about the killer disease "It is a highly infectious virus that can kill up to 90% of the people who catch it, causing terror among infected communities," it says. There is also no vaccination against it. Of Ebola's five subtypes, the Zaire strain -- the first to be identified -- is considered the most deadly. What is Ebola?

The Black Death: Bubonic Plague In the early 1330s an outbreak of deadly bubonic plague occurred in China. The bubonic plague mainly affects rodents, but fleas can transmit the disease to people. Once people are infected, they infect others very rapidly. Plague causes fever and a painful swelling of the lymph glands called buboes, which is how it gets its name. The Black Death Begins Video - Black Death You're almost done! You will soon receive an activation email. Once you click on the link, you will be added to our list. If you do not receive this email, please contact us. To ensure delivery to your inbox, add us to your address book.

Black Death - Facts & Summary Today, scientists understand that the Black Death, now known as the plague, is spread by a bacillus called Yersina pestis. (The French biologist Alexandre Yersin discovered this germ at the end of the 19th century.) They know that the bacillus travels from person to person pneumonically, or through the air, as well as through the bite of infected fleas and rats. Both of these pests could be found almost everywhere in medieval Europe, but they were particularly at home aboard ships of all kinds–which is how the deadly plague made its way through one European port city after another. Not long after it struck Messina, the Black Death spread to the port of Marseilles in France and the port of Tunis in North Africa.

New Theories Link Black Death to Ebola-Like Virus Between 1347 and 1352, a mysterious disease ravaged Europe, killing an estimated 25 million people -- 30 percent to 50 percent of the population. At the time, people said the disease was caused by a peculiar conjunction of the planets, by a miasma stirred up by earthquakes in Central Asia or by a conspiracy of Jews to undermine Christendom. Many called it the wrath of God and expected the end of the world. Although the pandemic now called the Black Death lasted no more than six years, according to most medieval historians, the disease behind it erupted periodically in different parts of Europe for the next three centuries, leaving millions more dead in its wake. Then it largely vanished from the continent, but questions over its origins remained. In 1894, two scientists, Dr.