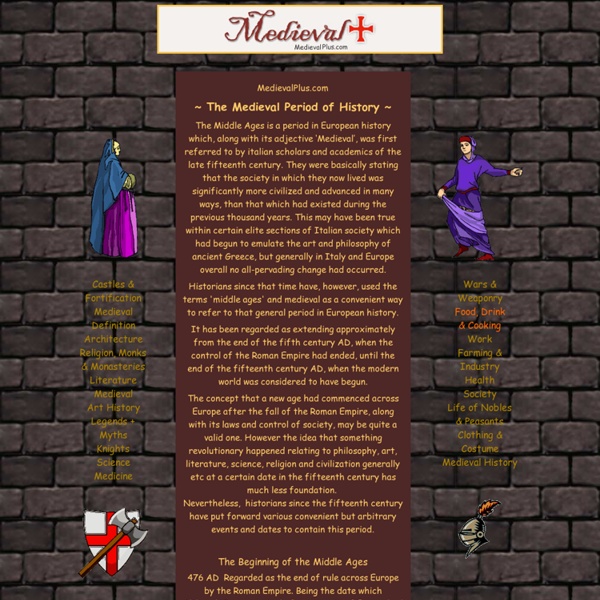 MedievalPlus.com The Middle Ages is a period in European history which, along with its adjective ‘Medieval’, was first referred to by italian scholars and academics of the late fifteenth century. They were basically stating that the society in which they now lived was significantly more civilized and advanced in many ways, than that which had existed during the previous thousand years. This may have been true within certain elite sections of Italian society which had begun to emulate the art and philosophy of ancient Greece, but generally in Italy and Europe overall no all-pervading change had occurred. Historians since that time have, however, used the terms 'middle ages' and medieval as a convenient way to refer to that general period in European history. It has been regarded as extending approximately from the end of the fifth century AD, when the control of the Roman Empire had ended, until the end of the fifteenth century AD, when the modern world was considered to have begun.

Medieval Introduction By about 1050, the invasions had run their course: the Moslems were in retreat; the Vikings and Hungarians had adopted Christianity and so became participants in western civilization. In the tenth century, the three-field system of crop rotation became popular, horses (more efficient than oxen) and iron plows were used, all resulting in surplus food and a better standard of living (Rosenwein 93). By 1000 we've got metal shoes for the horses and oxen to increase their work-lives, tandem harnesses for pulling with the shoulders instead of the neck. Water mills and, in the twelfth century, windmills appear.

Middle Ages, Dynamic Culture of the Middle Ages The European High Middle Ages, which lasted from about 1050 to 1300, evoke for many people romantic images of knights in shining armor, magnificent castles, and glorious cathedrals. And to many people, the word medieval (Latin medium aevum; "middle age") wrongly suggests a cultural intermission between the classical period of the Greek and Roman civilizations and the Renaissance. On the contrary, the High Middle Ages was a dynamic period that shaped European identity and development, stimulated in part by Europe’s interactions with other cultures in Eurasia and the Mediterranean. Many of the basic social and political patterns and institutions later associated with European history were formed during this era. Clear political boundaries and cultural identities emerged in the British Isles, France, Germany, Italy, eastern Europe, Iberia, and Scandinavia. Economic Expansion and the Emergence of Towns Social Diversity Political Centralization and the Development of Government by Consent

The Norton Anthology of English Literature: The Middle Ages: Review: Summary The Middle Ages designates the time span from the collapse of the Roman Empire to the Renaissance and Reformation, and the adjective "medieval" refers to whatever was made, written, or thought during the Middle Ages. The Middle Ages was a period of enormous historical, social, and linguistic change, despite the continuity of the Roman Catholic Church. In literary terms, the period can be divided into the Anglo-Saxon period (c. 450-1066), the Anglo-Norman period (1066- c. 1200), and the period of Middle English literature (thirteenth and fourteenth centuries). Linguistic and cultural changes in Britain were accelerated by the Norman Conquest in 1066, when words from French began to enter the English vocabulary. Awareness of a uniquely English literature did not actually exist before the late fourteenth century. In this period English finally began to replace French as the language of government.

Famous Medieval People Famous People - Medieval Biographies, Timelines and History of the Famous People Famous people of the Medieval period and details of the key dates and events in their lives. Famous people include Medieval lords, nobles, warriors, religious leaders, inventors of both Europe and England during the Medieval times. For facts and interesting information, timelines and biographies of famous people click the links to the following: Medieval Women Medieval Kings The other famous people of the era were the heroes and villains of the era who included Artists, Clerics, Crusaders, Diplomats, Religious Leaders, Military Leaders, Philosophers & Theologians, Physicians, Mathematicians, Writers & Poets and Reformers who featured in the turbulent times of the Middle Ages from 1066 - 1485. Famous People - Medieval Biographies and Timelines of the Heroes and Villains The Biographies and Timelines of famous Medival people detail the key dates and events in their lives. Robin Hood

Thomas Becket Thomas Becket, Archbishop of Canterbury, was killed in December 1170. Becket’s death remains one of the most famous stories associated with Medieval England. In Medieval England the Church was all powerful. The fear of going to Hell was very real and people were told that only the Catholic Church could save your soul so that you could go to Heaven. The head of the Catholic Church was the pope based in Rome. A king of England could not remove a pope from his position but popes claimed that they could remove a king by excommunicating him – this meant that the king’s soul was condemned to Hell and people then had the right to disobey the king. For people in England , there was always the real problem – do you obey the king or the pope ? In 1162, Henry II, king of England, appointed Thomas Becket, as Archbishop of Canterbury. Henry II also controlled a lot of France at this time. Becket did not want the job. The post of Archbishop changed Becket. The burial of Becket

Courtly Love - World History in Context One of the most commonly held, and perhaps most misunderstood, modern notions about the Middle Ages is the type of romantic or erotic love believed to have been practiced in the period, popularly referred to as "courtly love." Courtly love is a cluster of related ideas and sensibilities characterizing an extreme expression of romantic passion that was demonstrated frequently by characters in medieval literature, especially in courtly romances and the love lyrics of the French troubadours and the German minnesingers. The term "courtly love" was never used in medieval texts, although medieval authors and poets did use the term fin'amors (refined love) to describe the extremes of emotion experienced, often suffered, by male protagonists in romances and by the lover singing love songs to his beloved in the lyric tradition. But what exactly was the late medieval European phenomenon known popularly as "courtly love"? the knights and ladies at the aristocratic courts. A. E. W. J.