Humanity's earliest known ancestor discovered - and it looks like a 'wrinkled old sack' Bizarre lobster ancestor roamed ocean 500 million years ago. The animals were between 10 and 50 millimetres in length and lived on the floor of the Cambrian oceans. 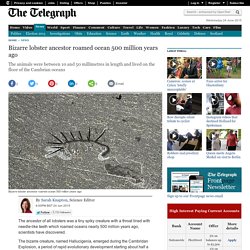 "The early evolutionary history of this huge group is pretty much uncharted," said Dr Martin Smith, a postdoctoral researcher in Cambridge's Department of Earth Sciences, and the paper's lead author. "While we know that the animals in this group are united by the fact that they moult, we haven't been able to find many physical characteristics that unite them.

" "It turns out that the ancestors of moulting animals were much more anatomically advanced than we ever could have imagined: ring-like, plate-bearing worms with an armoured throat and a mouth surrounded by spines," said Dr Jean-Bernard Caron, Curator of Invertebrate Palaeontology at the Royal Ontario Museum. 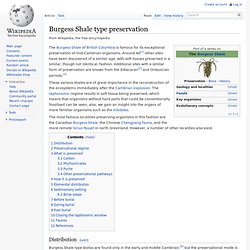 Around 40[1] other sites have been discovered of a similar age, with soft tissues preserved in a similar, though not identical, fashion. Additional sites with a similar form of preservation are known from the Ediacaran[2] and Ordovician periods.[3] Burgess Shale type fauna. A number of assemblages bear fossil assemblages similar in character to that of the Burgess Shale. 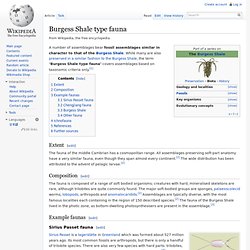 While many are also preserved in a similar fashion to the Burgess Shale, the term "Burgess Shale type fauna" covers assemblages based on taxonomic criteria only.[1] Extent[edit] The fauna of the middle Cambrian has a cosmopolitan range. Cambrian explosion. Meet the Kooteninchela deppi an ancient lobster-like beast with scissor claws that roamed the sea 500 million years ago... and it's just been named after Johnny Depp.

Fossils of lobster creature show it had scissor-like claws similar to Depp's character in 1990 film Edward ScissorhandsThe Kooteninchela deppi was an ancestor of modern-day lobsters and scorpions'Chela' is Latin for claws or scissors By Victoria Woollaston Published: 15:34 GMT, 16 May 2013 | Updated: 18:16 GMT, 16 May 2013 The Kooteninchela deppi was a an ancestor of modern-day lobsters and scorpions. 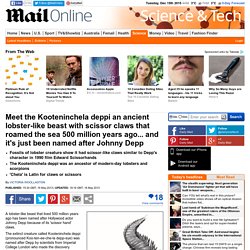 This artist reconstruction shows it had scissor-like claws. Kootenichela. Kootenichela deppi is an extinct arthropod described from the Middle Cambrian of the Kootenay National Park, Canada. 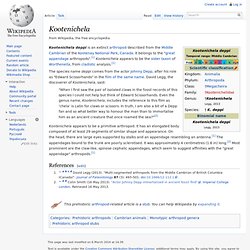 It belongs to the "great appendage arthropods".[1] Kootenichela appears to be the sister taxon of Worthenella, from cladistic analysis.[1] The species name deppi comes from the actor Johnny Depp, after his role as "Edward Scissorhands" in the film of the same name. David Legg, the discoverer of Kootenichela, said: "When I first saw the pair of isolated claws in the fossil records of this species I could not help but think of Edward Scissorhands. Even the genus name, Kootenichela, includes the reference to this film as 'chela' is Latin for claws or scissors.

Kootenichela appears to be a primitive arthropod. Kooteninchela deppi named after Johnny Depp. A scientist has discovered an ancient extinct creature with scissor hand-like claws in fossil records and named it in honour of a movie star. 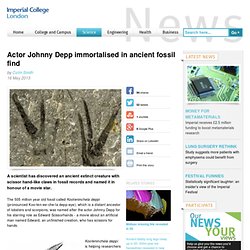 The 505 million year old fossil called Kooteninchela deppi (pronounced Koo-ten-ee-che-la depp-eye), which is a distant ancestor of lobsters and scorpions, was named after the actor Johnny Depp for his starring role as Edward Scissorhands - a movie about an artificial man named Edward, an unfinished creation, who has scissors for hands. David Legg named Kootenincheladeppi in honour of his favouritemovie star Kooteninchela deppi is helping researchers to piece together more information about life on Earth during the Cambrian period when nearly all modern animal types emerged.

David Legg, who carried out the research as part of his PhD in the Department of Earth Science and Engineering at Imperial College London, says: Prehistoric Life During the Cambrian Period. Before the Cambrian period, 600 or so million years ago, life on earth consisted mostly of single-celled bacteria and algae--but after the Cambrian, multi-celled vertebrate and invertebrate animals dominated the world's oceans. 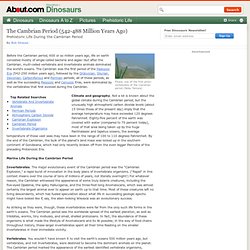 The Cambrian was the first period of the Paleozoic Era (542-250 million years ago), followed by the Ordovician, Silurian, Devonian, Carboniferous and Permian periods; all of these periods, as well as the succeeding Mesozoic and Cenozoic Eras, were dominated by the vertebrates that first evolved during the Cambrian. Climate and geography. Not a lot is known about the global climate during the Cambrian period, but the unusually high atmospheric carbon dioxide levels (about 15 times those of the present day) imply that the average temperature may have exceeded 120 degrees Fahrenheit. Marine Life During the Cambrian Period Invertebrates. As striking as they were, though, these invertebrates were far from the only such life forms in the earth's oceans. Vertebrates. Cambrian Period, Cambrian Explosion Information, Prehistoric Facts. 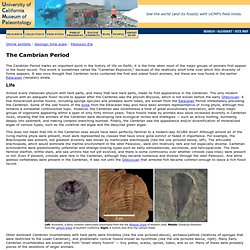 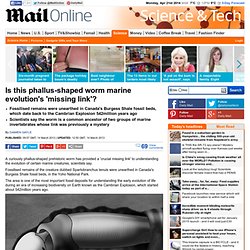 Fossilised remains of the creature dubbed Spartobranchus tenuis were unearthed in Canada's Burgess Shale fossil beds, in the Yoho National Park. Link to article on Spartobranchus tenuis. The Weird Youth of the Animal Kingdom (Slide Show) Paleontologists have found traces of animal life dating back at least 635 million years. 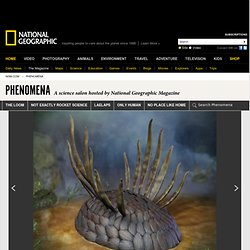 Those earliest animals may have been like today’s sponges, rooted to the sea floor and filtering food particles from the water. Over the next 100 million years or so, new kinds of animals emerged. Some were recognizable members of living groups of animals, while others were so bizarre that paleontologists suspect they belonged to long-extinct lineages. And then, around 520 million years ago, the fossil record of animals starts to roar like a firehose switched from a trickle to full blast. Fossil record reveals elusive jellyfish more than 500 million years old. Using recently discovered “fossil snapshots” found in rocks more than 500 million years old, three University of Kansas researchers have described the oldest definitive jellyfish ever found. In a paper to be published in PLoS ONE on October 31, the researchers describe four types of cnidarian fossils preserving traits that allow them to be related to modern orders and families of jellyfish.

Oldest chordate spawned everything with backbones. Andy Coghlan, reporter (Image: J.B. Caron) This strange eel-like creature from half a billion years ago is a forerunner of all modern animals with backbones, from fish to reptiles and humans. Evolution Of Complex Brains. April Flowers for redOrbit.com – Your Universe Online Anatomically complex brains evolved earlier than previously thought and have changed little over the course of time, according to a new study by University of Arizona neurobiologist Nicholas Strausfeld. The specimen described in the study, which will be published in the October 11 issue of Nature, is the earliest known fossil to show a brain. The three inch long fossil was discovered embedded in mudstones deposited during the Cambrian period 520 million years ago in what is currently the Yunnan Province in China.

It belongs to the species Fuxianhuia protensa, an extinct lineage of arthropods that combines advanced brain anatomy with a primitive body plan. Arthropods are the taxonomic group that is comprised of crustaceans, arachnids and insects. New to nature No 65: Diania cactiformis. The fossil-rich Chengjiang deposits of Yunnan province, China, date from about 525 million years ago and are among lagerstätten that have preserved soft-bodied animals with amazing detail.

Brain of Fuxianhuia protensa and comparison with Malacostraca. : Complex brain and optic lobes in an early Cambrian arthropod : Nature.