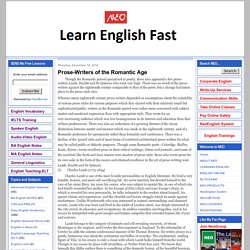 There was no revolt of the prose-writers against the eighteenth century comparable to that of the poets, but a change had taken place in the prose-style also. Whereas many eighteenth century prose-writers depended on assumptions about the suitability of various prose styles for various purposes which they shared with their relatively small but sophisticated public; writers in the Romantic period were rather more concerned with subject matter and emotional expression than with appropriate style. They wrote for an ever-increasing audience which was less homogeneous in its interest and education than that of their predecessors. Introduction to Romantic Prose: Overview of Authors and Works. Romantic prose exists in novels, short stories and essays written during the Romantic period, specifically in England. 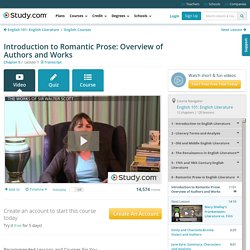 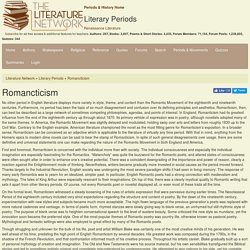 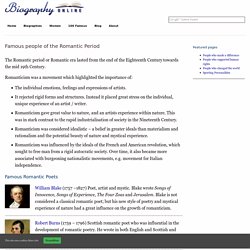 Romanticism was a movement which highlighted the importance of: The individual emotions, feelings and expressions of artists.It rejected rigid forms and structures. Instead it placed great stress on the individual, unique experience of an artist / writer.Romanticism gave great value to nature, and an artists experience within nature.

This was in stark contrast to the rapid industrialisation of society in the Nineteenth Century.Romanticism was considered idealistic – a belief in greater ideals than materialism and rationalism and the potential beauty of nature and mystical experience.Romanticism was influenced by the ideals of the French and American revolution, which sought to free man from a rigid autocratic society. Over time, it also became more associated with burgeoning nationalistic movements, e.g. movement for Italian independence. Famous Romantic Poets. Intro to American Romanticism. American Romanticism (or the American Renaissance) Ann Woodlief's Introduction For many years, this period and these writers were known as the American Renaissance, a coin termed by F.O. 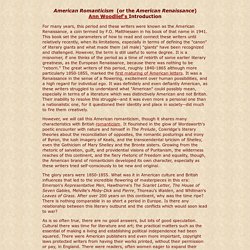 Matthiessen in his book of that name in 1941. This book set the parameters of how to read and connect these writers until relatively recently, when its limitations, especially in terms of defining the "canon" of literary giants and what made them (all male) "giants" have been recognized and challenged. However, the term is still useful to some degree. It is a misnomer, if one thinks of the period as a time of rebirth of some earlier literary greatness, as the European Renaissance, because there was nothing to be "reborn.

" However, we will call this American romanticism, though it shares many characteristics with British romanticism. The glory years were 1850-1855. Romanticism. If the Enlightenment was a movement which started among a tiny elite and slowly spread to make its influence felt throughout society, Romanticism was more widespread both in its origins and influence. 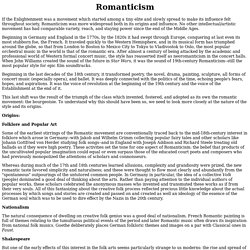 No other intellectual/artistic movement has had comparable variety, reach, and staying power since the end of the Middle Ages. Beginning in Germany and England in the 1770s, by the 1820s it had swept through Europe, conquering at last even its most stubborn foe, the French. It traveled quickly to the Western Hemisphere, and in its musical form has triumphed around the globe, so that from London to Boston to Mexico City to Tokyo to Vladivostok to Oslo, the most popular orchestral music in the world is that of the romantic era. After almost a century of being attacked by the academic and professional world of Western formal concert music, the style has reasserted itself as neoromanticism in the concert halls. Origins: Folklore and Popular Art Nationalism Shakespeare. Summary. Untitled Document. By the late 18th century in France and Germany, literary taste began to turn from classical and neoclassical conventions. 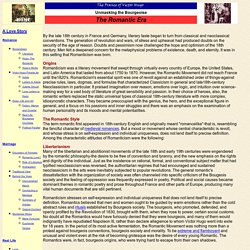 The generation of revolution and wars, of stress and upheaval had produced doubts on the security of the age of reason. Doubts and pessimism now challenged the hope and optimism of the 18th century. Men felt a deepened concern for the metaphysical problems of existence, death, and eternity. It was in this setting that Romanticism was born. Origins Romanticism was a literary movement that swept through virtually every country of Europe, the United States, and Latin America that lasted from about 1750 to 1870. The Romantic Style The term romantic first appeared in 18th-century English and originally meant "romancelike"-that is, resembling the fanciful character of medieval romances. Romanticism stresses on self-expression and individual uniqueness that does not lend itself to precise definition.