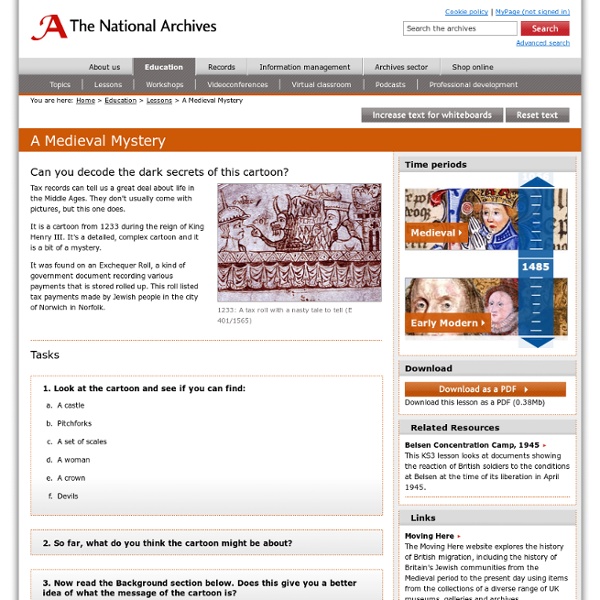 This lesson is suitable for KS3 History Unit 19: 'How and why did the Holocaust happen?' and could also be used to support Citizenship at KS3 Unit 4: 'Britain - a diverse society?'. The cartoon depicts the profoundly negative way in which Jews were viewed in 13th century England. Their situation did not improve. In 1290 King Edward I expelled every Jew from England, the first time this had happened anywhere in Europe. Thousands of men, women and children were forced to leave for the Continent and Jews were not officially allowed to live in Britain again until 1655. There are a number of figures in the cartoon that we can identify: Isaac fil Jurnet Isaac fil Jurnet was one of the richest Jews in England and certainly the richest Jew in Norwich, where he and his family had lived for a number of generations. Isaac was the chief money-lender to the Abbot and monks of Westminster. Isaac is pictured with a triple beard to associate him with the devil and suggest sexual excess. Mosse Mokke Abigail

Religion in the Middle Ages The Catholic Church The Catholic Church was the only church in Europe during the Middle Ages, and it had its own laws and large coffers. Church leaders such as bishops and archbishops sat on the king's council and played leading roles in government. As the population of Europe expanded in the twelfth century, the churches that had been built in the Roman style with round-arched roofs became too small. Monks and Nuns Monasteries in the Middle Ages were based on the rules set down by St. Monks went to the monastery church eight times a day in a routine of worship that involved singing, chanting, and reciting prayers from the divine offices and from the service for Mass. Pilgrimages Pilgrimages were an important part of religious life in the Middle Ages. The major Cathedral Centres of the Middle Ages Beauvais The cathedral at Beauvais (St. This, a building of immense proportions, was begun in 1247, and the choir was completed in 1272. The current nave was begun in 1373.

The Britannia Lexicon Have you always wanted to travel back in time to the Middle Ages but were hesitant because you didn't speak the language? Presenting the Britannia Lexicon of strange legal, feudal, chivalric, monastic, military and architectural terms to help you understand what those guys back then were really trying to say. In addition, we will soon be including lengthier entries on particular events, wars, movements and organizations, called "Sidebars of History" which will give a more in-depth view of life, politics and religion in medieval Britain. Just click a letter below to begin. Secrets of Lost Empires | Medieval Siege Welcome to the companion Web site to the NOVA program "Medieval Siege," scheduled for broadcast on January 24, 2006. In the film, which is a part of the NOVA series Secrets of Lost Empires, a team of timber framers and other specialists design, build, and fire a pair of trebuchets, a devastating engine of war popular in the Middle Ages. Here's what you'll find online: Medieval Arms Race The trebuchet was only the most frightening of the weapons early European warriors employed in siege warfare. Medieval Arms Race | NOVA Builds a Trebuchet | Life in a Castle Destroy the Castle | Resources | Transcript Medieval Siege | Pharaoh's Obelisk | Easter Island | Roman Bath | China Bridge | Site Map NOVA Online | Editor's Picks | Previous Sites | Join Us/E-mail | TV/Web Schedule About NOVA | Teachers | Site Map | Shop | Jobs | Search | To print © | created January 2000

List of Catholic Heresies and Human Traditions ADOPTED and PERPETUATED by the ROMAN CATHOLIC CHURCH IN THE COURSE OF 1600 YEARS (Compiled by Rev. Stephen L. Testa) “And ye shall know the truth, and the truth shall make you free.” —Jesus in John 8:32 Notice: These dates are in many cases approximate. And doctrine to be true must conform to the Word of God. At the Reformation in the 16th Century these heresies were repudiated as having no part in the Religion of Jesus as taught in the New Testament. What will be the next invention? Note: Cardinal Newman, in his book, “The Development of the Christian Religion,” admits that ... HERESIES are those doctrines and practices which are contrary to the Bible. The real heretics therefore, are the Roman Catholics and the true orthodox are the Evangelical Christians. BRETHREN! Tract# B-305 Order From:

stle Builder Image Copyright 1995 by Educational Management Group, Inc. During the Medieval era of history, life was lived by a very different set of political, economic, and social rules. The only form of government was a Monarchy where the king or queen ruled by "divine right." You are a Medieval Castle Builder living in Wales in the year 1076. The Baron wants his castle to not only be beautiful, but also the strongest castle of defense ever built. Before you can begin the castle design, you must first become familiar with the Welsh people who are going to inhabit this castle. After researching and taking notes on what daily life in a Welsh castle is like, you will then begin the design of the Baron's new castle. Your design may take the shape of a three-dimensional poster, a three-dimensional model, a video, or a sculpture. Step 1 - Daily Life To begin your research look at the Internet site "Life in a Medieval Castle" which will give you a good look at daily life in a Welsh castle. Teacher Notes

Magna Carta: Cornerstone of the U.S. Constitution At the death of his brother, Richard the Lionhearted, John assumed the throne of England, intent on exercising power to achieve his own selfish ends. To fund military campaigns in France, he extracted exorbitant fees from nobles, who, in turn, raised the rents imposed on their tenants. At the same time, John reduced the lords' customary powers over those tenants, restricting, for example, their power to hold court for those living on their feudal lands. He attempted to influence church elections and confiscated church properties, alienating the powerful ecclesiastical establishment and depriving the poor of the only source of relief available to paupers. King John's tyrannical practices extended to demanding sexual favors from the wives and daughters of his barons and to imposing brutal punishments on individuals who challenged his authority. Although English monarchs continued to abuse their powers, they also came to recognize the need for baronial support.

ORB: The Online Reference Book for Medieval Studies History - Ancient History in depth: The Story of Carbon Dating Religious Orders in Medieval Britain Monastic Orders Benedictines - founded by St. Benedict in 529 AD. The largest order, the Benedictines were noted for their learning. The four vows of these monks were to obedience,chastity, poverty, and manual labour for 7 hours each day. St. To Visit: Glastonbury Abbey, Ramsey Abbey Gatehouse, St Augustine's Abbey Scotland: Dunfermline Abbey, Iona Abbey, Kilwinning Abbey Carthusians - the Carthuisians lived lives of isolation and silence, spending their days in their own individual cells. To Visit: Mount Grace Priory Cistercians - Begun in France under the influence of St.Bernard of Clairvaux, the order chose isolated rural locations to build their monasteries, particularly in Wales and in the north, where they reclaimed land laid waste by William the Conqueror. One unanticipated result of this work ethic was that several monasteries, such as Fountains (Yorkshire), became very rich, and owned large parcels of land. To Visit: Crossraguel Abbey (Scotland) Military Orders Knights of St.

Science Timeline Marks in the evolution of science. A History of the World - Location - Europe World History