Previously-unseen images of Shackleton's 1915 Antarctic expedition revealed. Ernest Shackleton and his crew struggled to survive for months against the odds in the big freeze of the Antarctic The ship, the Endurance, became trapped in the ice and was eventually crushed before sinking into the Weddell SeaThe 28-man crew was left stranded in makeshift camps on the ice, battered by punishing and extreme conditionsHaunting images reveal astonishing insight into the men's fight for their lives in the 'world's last great wilderness' By Imogen Calderwood For Mailonline. 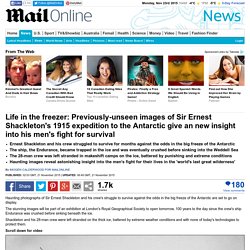 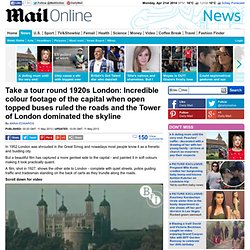 But a beautiful film has captured a more genteel side to the capital - and painted it in soft colours making it look practically quaint. A film, shot in 1927, shows the other side to London - complete with quiet streets, police guiding traffic and tradesman standing on the back of carts as they trundle along the roads. Scroll down for video This incredible colour footage of 1920s London was shot by an early British pioneer of film named Claude Frisse-Greene, who captured Tower Bridge. Rare photographs of 1920s life in one of Britain's most important industrial firms to go on show for the first time after sitting untouched in boxes in local library.

Thatcher's achievements will long outlive the spite of Sheffield's sons and daughters. “When Thatcher dies they’ll have to build a dance floor over her grave for all the people who want to dance on it.” 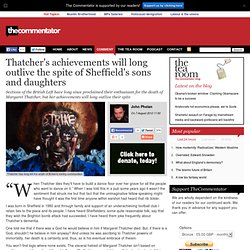 When I was told this in a pub some years ago it wasn’t the sentiment that struck me but that fact that the unimaginative fellow speaking might have thought it was the first time anyone within earshot had heard that rib tickler. I was born in Sheffield in 1980 and through family and support of an underachieving football club I retain ties to the place and its people.

I have heard Sheffielders, some quite reasonable folk, say that they wish the Brighton bomb attack had succeeded; I have heard them joke frequently about Thatcher’s dementia. One told me that if there was a God he would believe in him if Margaret Thatcher died. But, if there is a God, shouldn’t he believe in him anyway? You won’t find logic where none exists. That’s why people in places like Sheffield will be celebrating Margaret Thatcher’s death. For starters, feel the parochialism. Great Train Robber solves 49-year-old mystery with deathbed confession he injured engine driver in 1963 attack. 'Big Jim' Hussey reveals he was the masked man who coshed the driverHussey confessed just before he died in a hospice yesterday, aged 79The decorator was hired as muscle but was caught along with most of the gang after they were careless in concealing their whereaboutsHussey was jailed for 30 years, but released early in 1975Driver Jack Mills, who was 57 when the train was raided, never recovered from his head injuries and died seven years laterMany believed the man who knocked out Mr Mills was the infamous Ronnie Biggs, who later escaped from jail and went on the run to BrazilHussey went on to be convicted of assault and drug dealing By Paul Harris Published: 08:31 GMT, 14 November 2012 | Updated: 01:17 GMT, 15 November 2012.

My Dad was Jack Mills family Doctor in Crewe and as such knew him before the train robbery and treated him afterwards and for the following 7 years until his death in 1970. He saw the effect the attack had on him in those following years up close and personal. He always thought it was that stress and trauma that brought on the leukemia that finally killed him, and although that can never be proved he was in as good a position as anyone to make the connection. I know he always hated the train robbers and got upset and angry whenever he saw any of them being made out to be some sort of hero figure on the TV, right up to when he died in 2001. Hardly surpising when he knew exactly what suffering they had brought to that poor man. – charmainezoe 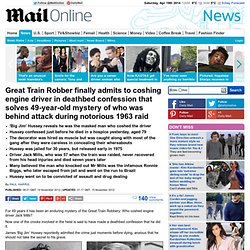 Decade of decadence: How little time has changed the debaucherous ways we cope with financial meltdown. By Annabel Venning Published: 00:58 GMT, 28 August 2012 | Updated: 13:14 GMT, 28 August 2012 'To feed and dance, always to be moving, that is the thing. 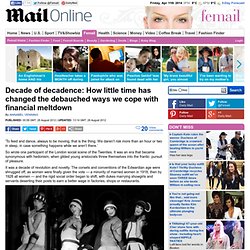 We daren’t risk more than an hour or two in sleep, in case something happens while we aren’t there.’ So wrote one participant of the London social scene of the Twenties. It was an era that became synonymous with hedonism, when gilded young aristocrats threw themselves into the frantic pursuit of pleasure. It was a decade of revolution and novelty. Lost London revealed in sepia glory of British Film Institute archive footage. By Daily Mail Reporter Published: 22:46 GMT, 15 August 2012 | Updated: 09:27 GMT, 16 August 2012 It was a time where there were fewer skyscrapers and the London Eye was still 70 years away - but these fascinating images show that parts of the capital have barely changed in seven decades. 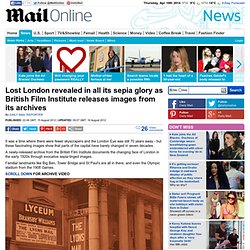 A newly-released archive from the British Film Institute documents the changing face of London in the early 1920s through evocative sepia-tinged images. Familiar landmarks like Big Ben, Tower Bridge and St Paul's are all in there, and even the Olympic stadium from the 1908 Games. Bittersweet life of the Sugar Girls... in their own pictures: How a book about Tate & Lyle's East End factory prompted workers to dig out their albums. By Bill Mouland Published: 22:48 GMT, 8 August 2012 | Updated: 22:48 GMT, 8 August 2012 The idea was to write a nostalgic account of the women who helped the oldest brand in Britain survive the Blitz and post-war rationing. 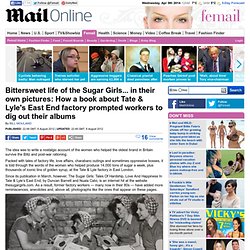 Packed with tales of factory life, love affairs, charabanc outings and sometimes oppressive bosses, it is told through the words of the women who helped produce 14,000 tons of sugar a week, plus thousands of iconic tins of golden syrup, at the Tate & Lyle factory in East London. Since its publication in March, however, The Sugar Girls: Tales Of Hardship, Love And Happiness In Tate & Lyle’s East End, by Duncan Barrett and Nuala Calvi, is an internet hit at the website thesugargirls.com. As a result, former factory workers — many now in their 80s — have added more reminiscences, anecdotes and, above all, photographs like the ones that appear on these pages. How about Ain't She Sweet? Sugarland express: Mr and MRs G.V. BBC - WW2 People's War - That First Battle. ‘That first Battle’ - by Alastair ‘Jock’ Troup It was a week before the Regiment fought its first battle. 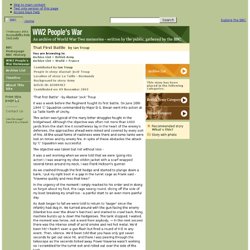 On June 26th 1944 'C' Squadron commanded by Major D.G. Bevan went into action at La Taille North of Unchy. Britain from Above. The Queen's Diamond Jubilee: 60 years in 60 photographs. When Britain really DID keep calm and carry on: Fed up with the way people whinge at every little set-back? A cache of lost propaganda films magically evokes a very different era. By Philip Norman Published: 00:04 GMT, 24 May 2012 | Updated: 12:03 GMT, 24 May 2012 We mythologise World War II perhaps more than any other conflict in our history. 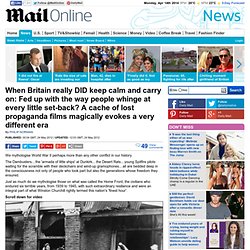 The Dambusters... the 'armada of little ships' at Dunkirk... the Desert Rats... young Spitfire pilots waiting for the scramble with their deckchairs and wind-up gramophones... all are bedded deep in the consciousness not only of people who took part but also the generations whose freedom they ensured. Just as much do we mythologise those on what was called the Home Front; the civilians who endured six terrible years, from 1939 to 1945, with such extraordinary resilience and were an integral part of what Winston Churchill rightly termed this nation's 'finest hour'.