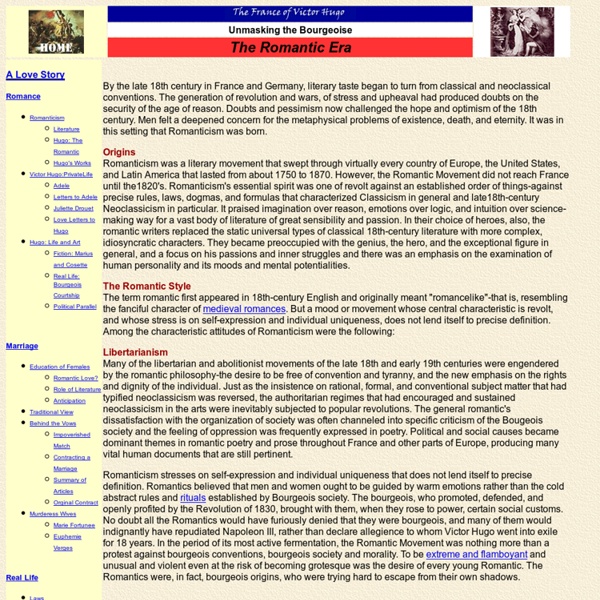 By the late 18th century in France and Germany, literary taste began to turn from classical and neoclassical conventions. The generation of revolution and wars, of stress and upheaval had produced doubts on the security of the age of reason. Doubts and pessimism now challenged the hope and optimism of the 18th century. Men felt a deepened concern for the metaphysical problems of existence, death, and eternity. It was in this setting that Romanticism was born. Origins Romanticism was a literary movement that swept through virtually every country of Europe, the United States, and Latin America that lasted from about 1750 to 1870. The Romantic Style The term romantic first appeared in 18th-century English and originally meant "romancelike"-that is, resembling the fanciful character of medieval romances. Romanticism stresses on self-expression and individual uniqueness that does not lend itself to precise definition.

Lecture 16: The Romantic Era The categories which it has become customary to use in distinguishing and classifying "movements" in literature or philosophy and in describing the nature of the significant transitions which have taken place in taste and in opinion, are far too rough, crude, undiscriminating -- and none of them so hopelessly as the category "Romantic." ---Arthur O. Lovejoy, "On the Discriminations of Romanticisms" (1924) Ask anyone on the street: "what is Romanticism?" and you will certainly receive some kind of reply. Everyone claims to know the meaning of the word romantic.

Famous people of the Romantic Period The Romantic period or Romantic era lasted from the end of the Eighteenth Century towards the mid 19th Century. Romanticism was a movement which highlighted the importance of: The individual emotions, feelings and expressions of artists.It rejected rigid forms and structures. The Norton Anthology of English Literature, Ninth Edition: W. W. Norton StudySpace Volume D The Romantic Period 1785–1832 (NAEL Vol. D) terms & themes "Romanticism" is a period, movement, style, or genre in literature, music, and other arts starting in the late 1700s and flourishing through the early to mid 1800s, a time when the modern mass culture in which we now live first took form following the establishment of modern social systems during the Enlightenment or Age of Reason: the rise of nation-states as defining social and geographic entities increasing geographic and social mobility, with more people moving to cities & the growth of a literate middle class, new technologies dependent on power from fossil fuels (trains, steamships, industrial printing)

Romancticism - Literature Periods & Movements Literature Network » Literary Periods » Romancticism No other period in English literature displays more variety in style, theme, and content than the Romantic Movement of the eighteenth and nineteenth centuries. Furthermore, no period has been the topic of so much disagreement and confusion over its defining principles and aesthetics. Romanticism, then, can best be described as a large network of sometimes competing philosophies, agendas, and points of interest. In England, Romanticism had its greatest influence from the end of the eighteenth century up through about 1870.

The Norton Anthology of English Literature: The Romantic Age: review: Summary Writers working in the time period from 1785 to 1830 did not think of themselves as “Romantics,” but were seen to belong to a number of distinct movements or schools. For much of the twentieth century scholars singled out five poets—Wordsworth, Coleridge, Byron, Percy Shelley, and Keats—and constructed a unified concept of Romanticism on the basis of their works. Some of the best regarded poets of the time were in fact women, including Anna Barbauld, Charlotte Smith, and Mary Robinson. Yet educated women were targets of masculine scorn, and the radical feminism of a figure like Mary Wollstonecraft remained exceptional.

Romanticism Alternative titles: Romantic movement; Romantic Style Romanticism, Britannica Classic: “The Spirit of Romanticism”Encyclopædia Britannica, Inc.attitude or intellectual orientation that characterized many works of literature, painting, music, architecture, criticism, and historiography in Western civilization over a period from the late 18th to the mid-19th century. Romanticism can be seen as a rejection of the precepts of order, calm, harmony, balance, idealization, and rationality that typified Classicism in general and late 18th-century Neoclassicism in particular. It was also to some extent a reaction against the Enlightenment and against 18th-century rationalism and physical materialism in general. Romanticism emphasized the individual, the subjective, the irrational, the imaginative, the personal, the spontaneous, the emotional, the visionary, and the transcendental. ... (100 of 1,783 words)

The Culture of Rebellion in the Romantic Era Eugene Delacroix, Liberty Leading the People, 1830. One of Delacroix’s best known works, the painting depicts a bare-breasted Liberty leading Parisians of mixed social and economic backgrounds into battle. The Romantic era is typically noted for its intense political, social, and cultural upheavals. The period is conventionally marked as beginning with the French Revolution in 1789 and ending with the passing of the Great Reform Bill in 1832, occurrences which exemplify the political zeal of the late eighteenth- and early nineteenth centuries as well as the resultant changes brought about in society. Events initially external to England, such as the French Revolution, are internalized in Romantic literature as a part of the debates on more relevant, internal issues in English politics, such as the prededing American Revolution and the imminent Irish Uprising of 1798. One key area in which the influence of the French Revolution manifests itself is in the satiric poetry of the period.

What are the characteristic features of poetry during the Romantic Movement?  Characteristics of Romantic Poetry There are many angles and point-of-views from which one can study romantic poetry. The most of important characteristic of this form of poetry is imagination. British Romanticism: Characteristics of Romantic Poets Later Romantic Poets The following share characteristics of later Romantic poets: Lord Byron (1788-1824): Lord Byron enjoyed unmatched popularity. Byron's most famous creations are his dark heroes, called Byronic heroes, who, in fact, were not heroes at all, but stood out from ordinary humans as larger than life. English literature: The Romantic Period At the turn of the century, fired by ideas of personal and political liberty and of the energy and sublimity of the natural world, artists and intellectuals sought to break the bonds of 18th-century convention. Although the works of Jean Jacques Rousseau and William Godwin had great influence, the French Revolution and its aftermath had the strongest impact of all. In England initial support for the Revolution was primarily utopian and idealist, and when the French failed to live up to expectations, most English intellectuals renounced the Revolution. However, the romantic vision had taken forms other than political, and these developed apace. In Lyrical Ballads (1798 and 1800), a watershed in literary history, William Wordsworth and Samuel Taylor Coleridge presented and illustrated a liberating aesthetic: poetry should express, in genuine language, experience as filtered through personal emotion and imagination; the truest experience was to be found in nature.

Romanticism Romanticism arose as a reaction against the excessive rationalism of the Enlightenment. It drew upon the French Revolution's rejection of aristocratic social and political norms. It was also influenced by the theory of evolution and uniformitarianism, which argued that "the past is the key to the present." Thus some Romantics looked back nostalgically to the sensibility of the Middle Ages and elements of art and narrative perceived to be from the medieval period.