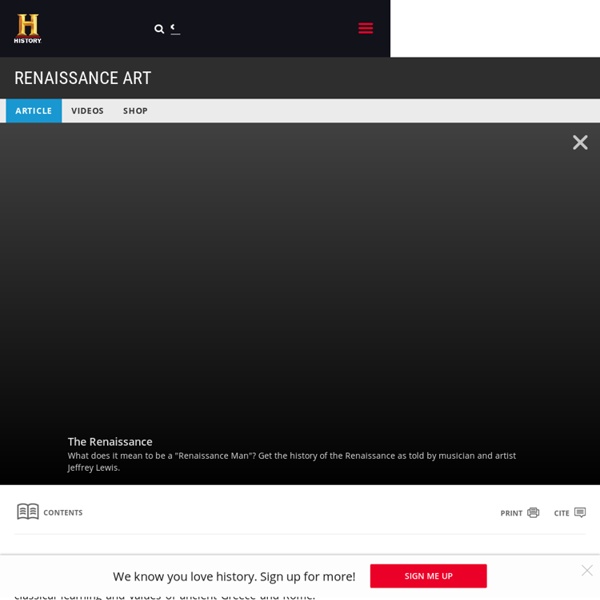 By the end of the 15th century, Rome had displaced Florence as the principal center of Renaissance art, reaching a high point under the powerful and ambitious Pope Leo X (a son of Lorenzo de’ Medici). Three great masters–Leonardo da Vinci, Michelangelo and Raphael–dominated the period known as the High Renaissance, which lasted roughly from the early 1490s until the sack of Rome by the troops of the Holy Roman Emperor Charles V of Spain in 1527. Leonardo (1452-1519) was the ultimate “Renaissance man” for the breadth of his intellect, interest and talent and his expression of humanist and classical values. Leonardo’s best-known works, including the “Mona Lisa” (1503-05), “The Virgin of the Rocks” (1485) and the fresco “The Last Supper” (1495-98), showcase his unparalleled ability to portray light and shadow, as well as the physical relationship between figures–humans, animals and objects alike–and the landscape around them.

History of the Renaissance in Europe: A rebirth, renewal, rediscovery The Renaissance Beginning And Progress Of The Renaissance Edited By: R. A. Guisepi Fourteenth To Sixteenth Century Not what man knows but what man feels, concerns art. The Italian Renaissance had placed human beings once more in the center of life's stage and infused thought and art with humanistic values. the stimulating ideas current in Italy spread to other areas and combined with indigenous developments to produce a French Renaissance, an English Renaissance, and so on. The term Renaissance, literally means "rebirth" and is the period in European civilization immediately following the Middle Ages, conventionally held to have been characterized by a surge of interest in classical learning and values. Title: Beginning And Progress Of The Renaissance The new birth of resurrection known as the "Renaissance" is usually considered to have begun in Italy in the fourteenth century, though some writers would date its origin from the reign of Frederick II, 1215-1250; and anticipated. court in Palermo.

Renaissance 1450-1650 | History of Costume Once again I shall make a glossary of clothing terms, this time from the Renaissance. Some of the terms I defined for Medieval clothing were also used during the Renaissance and I will most likely use some of those terms in current posts, so their definitions can be found here. basquine — boned bodice made of whalebone and leather, gave the appearance of wider shoulders tapering to a tiny waist (women) beret— thin, loose hats that usually tilted towards one side of the head Renaissance beret bombasting — stuffing for trunk hose, peascod-belly, and leg-of-mutton sleeves, composed of rags, flock, and other materials bourrelet — wider version of the farthingale adapted in France, more cylindrical in shape rather than conical (women) bum roll/bolster — roll of padding tied around the hip line to hold the skirt out from the body, less restrictive than the farthingale (women) camicia — undershirt usually made of white linen (men) canions — upper stocks worn from the doublet to the knee (men)

Italian Culture: Facts, Customs & Traditions Italian culture is steeped in the arts, family, architecture, music and food. Home of the Roman Empire and a major center of the Renaissance, culture on the Italian peninsula has flourished for centuries. Here is a brief overview of Italian customs and traditions. About 96 percent of the population of Italy is Italian, though there are many other ethnicities that live in this country. The official language of the country is Italian. "Family is an extremely important value within the Italian culture," Talia Wagner, a Los Angeles based marriage and family therapist, told Live Science. Italians have frequent family gatherings and enjoy spending time with those in their family. The major religion in Italy is Roman Catholicism. Italy has given rise to a number of architectural styles, including classical Roman, Renaissance, Baroque and Neoclassical. Florence, Venice and Rome are home to many museums, but art can be viewed in churches and public buildings. Additional resources

Medieval Clothing, Renaissance Clothing, Period Clothing and Medieval Fair Clothing by Medieval Collectibles Medieval Clothing and Renaissance ClothingMedieval Collectibles is your source for high quality, hand-crafted Renaissance, Medieval, and Fantasy clothing appropriate for SCA, LARP, Weddings, Renaissance Festivals, Theater and more! Whether you are strolling around the Faire, planning a Medieval wedding, or dancing around the fires at Pennsic War, we create apparel that will take you back through the ages with timeless grace and beauty. In our medieval and renaissance clothing category you will find men and women clothing that has everything from jerkins, tunics and surcoats to bodices, chemises and medieval dresses. We have medieval and renaissance shirts and hats that come in a variety of styles, shapes, sizes and colors.

Martin Luther Biography Article abstract: Out of his own personal struggle and his conflict with the Church, Luther developed a theology and a religious movement that rejuvenated the Christian faith and had a profound impact on the social, political, and religious thought of Western society. Early Life Martin Luther was born on November 10, 1483, at Eisleben, Saxony, to Hans and Margarethe Luther. Soon after his birth, the family moved to Mansfield, where his father worked in the copper mines, prospering sufficiently to become one of the town’s councillors in 1491. Possessing a strong, forceful character, Hans Luther had a great impact on his son. His father wanted Luther to pursue a legal career. Beneath his successful exterior, however, all was not well with Luther. Life’s Work The issue that ignited Luther’s conflict with the Church was the sale of indulgences in Germany by the Dominican friar Johann Tetzel. Rome sent a summons for Luther to appear at Rome to Cardinal Thomas Cajetan, who was at Augsburg.

Renaissance This movement began in Italy in the 14th century and the term, literally meaning rebirth, describes the revival of interest in the artistic achievements of the Classical world. Initially in a literary revival Renaissance was determined to move away from the religion-dominated Middle Ages and to turn its attention to the plight of the individual man in society. It was a time when individual expression and worldly experience became two of the main themes of Renaissance art. The movement owed a lot to the increasing sophistication of society, characterised by political stability, economic growth and cosmopolitanism. In addition, the arts benefited from the patronage of such influential groups as the Medici family of Florence, the Sforza family of Milan and Popes Julius II and Leo X. Leonardo da Vinci was the archetypal Renaissance man representing the humanistic values of the period in his art, science and writing.

Martin Luther Short Biography, facts and interesting information about Martin Luther - the life of one of the famous people who lived during the Medieval timesFamous as a Theologian and religious reformer who founded the Lutheran religion Short Biography about the life of Martin LutherThe following biography, short history and interesting facts provide helpful information for history courses and history coursework about the life and history of Martin Luther a famous Medieval character of historical importance who lived during the Middle Ages: Country of Origin / Nationality: German born Eisleben in the Holy Roman Empire Lifetime: 1483 - 1546Born: He was born on November 10, 1483Childhood, early life and education: Various strict schools and the University of Erfurt Family connections : He was the son of Hans and Margarethe Luther (née Lindemann). Protestant Reformation

Renaissance: Historical Background In the 12th cent. a rediscovery of Greek and Roman literature occurred across Europe that eventually led to the development of the humanist movement in the 14th cent. In addition to emphasizing Greek and Latin scholarship, humanists believed that each individual had significance within society. The growth of an interest in humanism led to the changes in the arts and sciences that form common conceptions of the Renaissance. The 14th cent. through the 16th cent. was a period of economic flux in Europe; the most extensive changes took place in Italy. After the death of Frederick II in 1250, emperors lost power in Italy and throughout Europe; none of Frederick's successors equaled him. During the Renaissance small Italian republics developed into despotisms as the centers of power moved from the landed estates to the cities. The Columbia Electronic Encyclopedia, 6th ed. More on Renaissance Historical Background from Infoplease: See more Encyclopedia articles on: Literature: General

Renaissance Literature - Literature Periods & Movements Literature Network » Literary Periods » Renaissance Literature The Renaissance in Europe was in one sense an awakening from the long slumber of the Dark Ages. What had been a stagnant, even backsliding kind of society re-invested in the promise of material and spiritual gain. There was the sincerely held belief that humanity was making progress towards a noble summit of perfect existence. How this rebirth – for Renaissance literally means rebirth – came to fruition is a matter of debate among historians. Several threads can be said to tie the entire European Renaissance together across the three centuries which it spanned. The single greatest innovation of the Renaissance era was the printing press, put into service around 1440 by Johannes Gutenberg. Every nation in Western Europe experienced its own incarnation of the Renaissance. The dominant forms of English literature during the Renaissance were the poem and the drama. This article is copyrighted © 2011 by Jalic Inc.