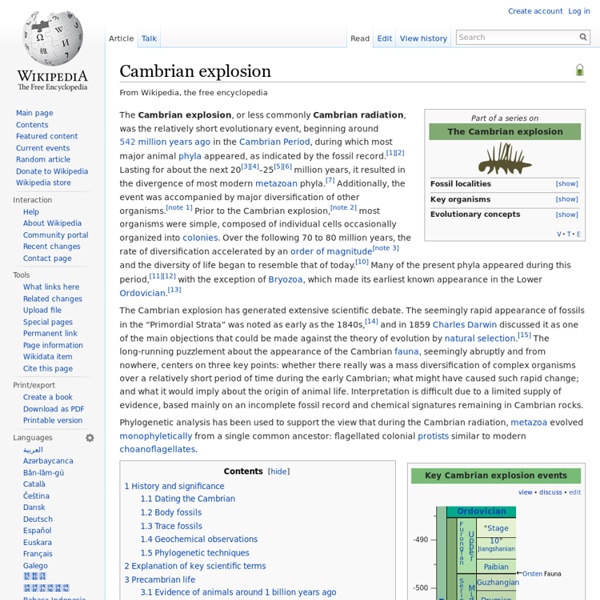 The Cambrian explosion has generated extensive scientific debate. The seemingly rapid appearance of fossils in the “Primordial Strata” was noted as early as the 1840s,[14] and in 1859 Charles Darwin discussed it as one of the main objections that could be made against the theory of evolution by natural selection.[15] The long-running puzzlement about the appearance of the Cambrian fauna, seemingly abruptly and from nowhere, centers on three key points: whether there really was a mass diversification of complex organisms over a relatively short period of time during the early Cambrian; what might have caused such rapid change; and what it would imply about the origin of animal life. Interpretation is difficult due to a limited supply of evidence, based mainly on an incomplete fossil record and chemical signatures remaining in Cambrian rocks. Key Cambrian explosion events Gaskiers glaciationArchaeonassa-type trace fossils History and significance[edit] Dating the Cambrian[edit] = Basal node Related:  Cambrian Period: 542–488.3 mya • Thinking Tools

Link to article on Spartobranchus tenuis You're a Criminal in a Mass Surveillance World – How to Not Get Caught Sometimes you just get lucky. I was in Amsterdam when the Snowden story broke. CNN was non-stop asking politicians and pundits, “Is Edward Snowden a traitor?” The Snowden story hit me upon my return from – of all places on earth – the Secret Annex of the Anne Frank House. The “Anne Frank House” — then and now I say I was lucky because the cosmic unlikeliness of my Secret Annex visit coinciding with Snowden’s mass surveillance revelations led to some revelations of my own. It turns out we’re all criminals in a mass surveillance world. What Makes a Criminal? Merriam-Webster defines crime as “activity that is against the law.” The law as a whole is an ever-expanding collection of rules that politicians (“lawmakers”) decree and occasionally repeal. Simply put, laws are the rules politicians make up, and criminals are people who break them. It floored me to realize: Anne Frank was, in fact, a criminal. We can express outrage at the designation since Anne did nothing wrong. The Secret Annex Miep

Burgess Shale The Burgess Shale Formation, located in the Canadian Rockies of British Columbia, is one of the world's most celebrated fossil fields.[2] It is famous for the exceptional preservation of the soft parts of its fossils. At 505 million years (Middle Cambrian) old,[3] it is one of the earliest fossil beds containing soft-part imprints. The rock unit is a black shale and crops out at a number of localities near the town of Field in Yoho National Park and the Kicking Horse Pass. Another outcrop is in Kootenay National Park 42 km to the south. History and significance[edit] The Burgess Shale was discovered by palaeontologist Charles Walcott on 30 August 1909,[4] towards the end of the season's fieldwork.[5] He returned in 1910 with his sons, daughter, and wife, establishing a quarry on the flanks of Fossil Ridge. With Parks Canada and UNESCO recognising the significance of the Burgess Shale, collecting fossils became politically more difficult from the mid-1970s. Geological setting[edit]

The Top 100 Documentaries We Can Use To Change The World A more beautiful, just and sustainable world is possible. Take this library and use it to inspire global change! Originally featured on Films For Action Documentaries have an incredible power to raise awareness and create transformative changes in consciousness both at the personal and global levels. Over the last 8 years, we’ve watched hundreds of social change documentaries and cataloged the best of them on the site. There’s now so many that we realized we needed to filter this down even further. All of the films have been selected because they are either free to watch online, or can be rented online. Did we miss anything really good?

Burgess Shale type fauna A number of assemblages bear fossil assemblages similar in character to that of the Burgess Shale. While many are also preserved in a similar fashion to the Burgess Shale, the term "Burgess Shale type fauna" covers assemblages based on taxonomic criteria only.[1] Extent[edit] The fauna of the middle Cambrian has a cosmopolitan range. All assemblages preserving soft-part anatomy have a very similar fauna, even though they span almost every continent.[2] The wide distribution has been attributed to the advent of pelagic larvae.[2] Composition[edit] The fauna is composed of a range of soft bodied organisms; creatures with hard, mineralised skeletons are rare, although trilobites are quite commonly found. Example faunas[edit] Sirius Passet fauna[edit] Reconstruction of Kerygmachela from Sirius Passet, viewed from the top, with the head to the right. Sirius Passet is a lagerstätte in Greenland which was formed about 527 million years ago. Chengjiang fauna[edit] Burgess Shale[edit] Other fauna[edit]

How Covert Agents Infiltrate the Internet to Manipulate, Deceive, and Destroy Reputations One of the many pressing stories that remains to be told from the Snowden archive is how western intelligence agencies are attempting to manipulate and control online discourse with extreme tactics of deception and reputation-destruction. It’s time to tell a chunk of that story, complete with the relevant documents. Over the last several weeks, I worked with NBC News to publish a series of articles about “dirty trick” tactics used by GCHQ’s previously secret unit, JTRIG (Joint Threat Research Intelligence Group). These were based on four classified GCHQ documents presented to the NSA and the other three partners in the English-speaking “Five Eyes” alliance. Today, we at the Intercept are publishing another new JTRIG document, in full, entitled “The Art of Deception: Training for Online Covert Operations.” Other tactics aimed at individuals are listed here, under the revealing title “discredit a target”: Then there are the tactics used to destroy companies the agency targets:

Burgess Shale type preservation The Burgess Shale of British Columbia is famous for its exceptional preservation of mid-Cambrian organisms. Around 40[1] other sites have been discovered of a similar age, with soft tissues preserved in a similar, though not identical, fashion. Additional sites with a similar form of preservation are known from the Ediacaran[2] and Ordovician periods.[3] These various shales are of great importance in the reconstruction of the ecosystems immediately after the Cambrian explosion. The taphonomic regime results in soft tissue being preserved, which means that organisms without hard parts that could be conventionally fossilised can be seen; also, we gain an insight into the organs of more familiar organisms such as the trilobites. The most famous localities preserving organisms in this fashion are the Canadian Burgess Shale, the Chinese Chengjiang fauna, and the more remote Sirius Passet in north Greenland. Distribution[edit] Preservational regime[edit] What is preserved[edit] Carbon[edit]

Do Atheists Exist? A new “godless” church makes you wonder. For people who like church except for the parts about God, a British couple have bodied forth a new denomination that cheerfully excludes him, raising the volume on the question “What is atheism?” several decibels overnight. The Sunday Assembly, a “godless congregation” founded in East London last January by standup comedians Sanderson Jones and Pippa Evans, now boasts affiliates in Brighton, Bristol, Oxford, Canberra, Melbourne, New York, and Portland, Ore. “Church has got so many awesome things going for it (which we’ve shamelessly nicked),” Jones and Evans confess in a short piece that appeared in the New York Times to mark the launch of their venture. Half ironically, the founders allow that the Assembly is a church, dedicated to benevolent acts and the search for transcendence. Wonder more: No one disputes that atheism is compatible with wonder at the physical universe and how it works. Q: Why is there something rather than nothing?

Kooteninchela deppi named after Johnny Depp A scientist has discovered an ancient extinct creature with scissor hand-like claws in fossil records and named it in honour of a movie star. The 505 million year old fossil called Kooteninchela deppi (pronounced Koo-ten-ee-che-la depp-eye), which is a distant ancestor of lobsters and scorpions, was named after the actor Johnny Depp for his starring role as Edward Scissorhands - a movie about an artificial man named Edward, an unfinished creation, who has scissors for hands. David Legg named Kootenincheladeppi in honour of his favouritemovie star Kooteninchela deppi is helping researchers to piece together more information about life on Earth during the Cambrian period when nearly all modern animal types emerged. David Legg, who carried out the research as part of his PhD in the Department of Earth Science and Engineering at Imperial College London, says: “When I first saw the pair of isolated claws in the fossil records of this species I could not help but think of Edward Scissorhands.

How imageboard culture shaped Gamergate Image: Yotsuba&! Vol 7, by Kiyohiko Azuma Anonymous image boards are a continuous froth of simultaneously earnest and ironic hostility. The flagship English-language anonymous imageboard is 4chan, founded by Christopher “moot” Poole in 2003. These anonymous imageboards have their own idiosyncratic culture, despite the lack of permanent identity. Without identity, every anon is whoever they want to be at the moment. The atmosphere is that of a paradoxically jovial angry mob. Everyone’s anonymous, so a poster can just join the winning side of an argument, cheerfully mocking their own older posts. Anon culture is a decentralized echo chamber, but one that can produce interesting things through the work of many hands. One toxic belief common to many anon imageboards is a love/hate relationship with so-called tripfriends. In particular, being identifiable is counter to the anon creed. GamerGate inherited these tenets of anon culture. Image by anonymous 4chan /v/ user. Title image: Yotsuba&!

Kootenichela Kootenichela deppi is an extinct arthropod described from the Middle Cambrian of the Kootenay National Park, Canada. It belongs to the "great appendage arthropods".[1] Kootenichela appears to be the sister taxon of Worthenella, from cladistic analysis.[1] The species name deppi comes from the actor Johnny Depp, after his role as "Edward Scissorhands" in the film of the same name. "When I first saw the pair of isolated claws in the fossil records of this species I could not help but think of Edward Scissorhands. Kootenichela appears to be a primitive arthropod.