Poland. Immigration. Behind the mask of far-right leaders in Europe. Why is Sweden closing its prisons? Swedish prisons have long had a reputation around the world as being liberal and progressive. 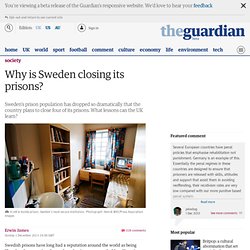 So much so that in 2005 even Saddam Hussein requested to be transferred to a Swedish prison to await his trial – a request that was rejected by the Swedish authorities. But are the country's prisons a soft option? The head of Sweden's prison and probation service, Nils Oberg, announced in November that four Swedish prisons are to be closed due to an "out of the ordinary" decline in prisoner numbers. Although there has been no fall in crime rates, between 2011 and 2012 there was a 6% drop in Sweden's prisoner population, now a little over 4,500. A similar decrease is expected this year and the next. "The modern prison service in Sweden is very different from when I joined as a young prison officer in 1978," says Kenneth Gustafsson, governor of Kumla prison, Sweden's most secure jail, situated 130 miles west of Stockholm.

Reframing Europe in unfriendly times. The EU must move fast and persistently to convince potential voters to gain confidence in its relevance and abilities. 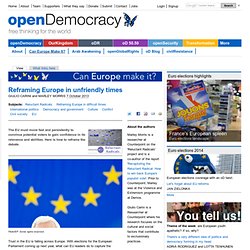 Here is how to reframe the debate. Flickr/EP. Some rights reserved. A Continent Mired in Crisis Coins a Language of Economic Pain. Carlos Lujan for the International Herald Tribune Darío Villanueva of the Spanish Royal Academy, which has updated a dictionary with new terms spawned by the economic crisis. 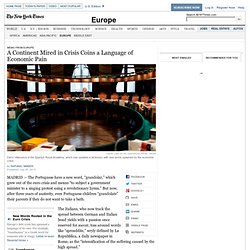 The Italians, who now track the spread between German and Italian bond yields with a passion once reserved for soccer, toss around words like “spreaddite,” wryly defined by La Repubblica, a daily newspaper in Rome, as the “intensification of the suffering caused by the high spread.” In Greece, crisis-born phrases pepper conversations in cafes and offices and on subway trains, particularly the ironic use of expressions or slogans uttered by political leaders, like a claim in 2009 by George A. Papandreou, then the prime minister, that there was money, when clearly there was not. “Don’t worry, I’ll get it,” a Greek man celebrating his birthday at an Athens taverna told his friends recently when they reached for their wallets. Europe’s Austerity Madness. But the purveyors of conventional wisdom forgot that people were involved. 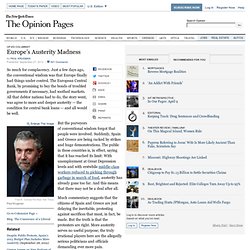 Suddenly, Spain and Greece are being racked by strikes and huge demonstrations. The public in these countries is, in effect, saying that it has reached its limit: With unemployment at Great Depression levels and with erstwhile middle-class workers reduced to picking through garbage in search of food, austerity has already gone too far. And this means that there may not be a deal after all. Much commentary suggests that the citizens of Spain and Greece are just delaying the inevitable, protesting against sacrifices that must, in fact, be made. Ship Europe. Film Socialisme, Wild Bunch, 2012. 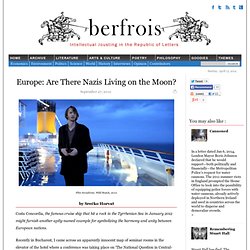 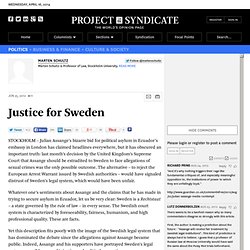 Click to hide this space STOCKHOLM – Julian Assange’s bizarre bid for political asylum in Ecuador’s embassy in London has claimed headlines everywhere, but it has obscured an important truth: last month’s decision by the United Kingdom’s Supreme Court that Assange should be extradited to Sweden to face allegations of sexual crimes was the only possible outcome. Lm Tóibín on Joyce's Dublin: city of dreamers and chancers. One hundred and eight years ago today James Joyce and Nora Barnacle went out walking together for the first time. 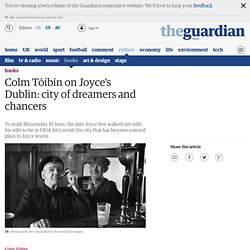 "Bloomsday", the day on which the novel Ulysses takes place, happens also on 16 June 1904. Hidden aspects of his own life nourished the narrative for Joyce. His own mythology could thus merge with a number of other mythologies to add weight and substance to what was, on the surface and maybe buried in the depths too, an ordinary day in an ordinary place. Nora worked in Finn's Hotel, and the walk between there and Merrion Square, where they originally arranged to meet, passed by 6 Clare Street, from where Samuel Beckett's father ran his business, and where Beckett would write some of his novel Murphy. Joyce, who would begin the stories in his book Dubliners in that year, 1904, and Nora planned to meet outside the house where Sir William Wilde had lived and where Oscar Wilde had been brought up, the site of many parties.

The story, however, has other readings to offer. The fall and future of Dutch neo-liberal nationalism. The collapse of budget negotiations and the upcoming elections in Holland provide opportunities for the emergence of better answers to the violence done by nationalist antagonisms, imposed through neo-liberal austerity programmes Jusqu'ici tout va bien, jusqu'ici tout va bien… But what is important is not the fall itself but the landing… The Dutch minority coalition has abruptly imploded only a week after the publication of my article on the rise of a contradictory form of nationalist neo-liberalism. 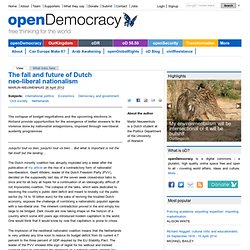 Geert Wilders, leader of the Dutch Freedom Party (PVV), decided on the supposedly last day of the seven week closed-door talks to once and for all bury all hopes for a continuation of an ideologically difficult (if not impossible) coalition. The implosion of the neoliberal nationalist coalition means that the Netherlands is very unlikely any time soon to reduce its budget deficit from its current 4.7 percent to the three percent of GDP required by the EU Stability Pact.

Europe’s star? This year’s Euro 2012 host has been untouched by the financial crisis, but for Poland, success has not come without strain Chuck Norris, a cult figure in Poland, advertises bank services. 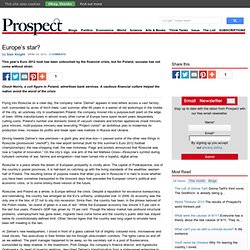 A cautious financial culture helped the nation avoid the worst of the crisis Flying into Rzeszów on a clear day, the company name “Zelmer” appears in bold letters across a vast factory roof, surrounded by acres of birch trees. Last summer, after 60 years in a warren of old workshops in the middle of the city, an unshowy city in southeastern Poland, the company moved into a purpose-built plant on the edge of town. While manufacturers in almost every other corner of Europe have spent recent years desperately cutting costs, Poland’s number one domestic brand of vacuum cleaners and kitchen appliances (meat mincers, juice mincers, multi-purpose mincers) was executing “Project Junior”: an ambitious plan to modernise its production lines, increase its profits and break open new markets in Russia and Ukraine.

Serbia's election: more defeat than victory. The elevation of Tomislav Nikolić to Serbia's presidency, unexpected by many observers, owes much to the political record and direction of the country's coalition government, says Eric Gordy. 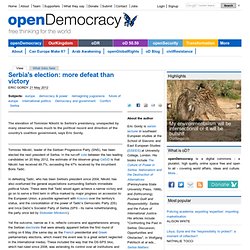 Tomislav Nikolić, leader of the Serbian Progressive Party (SNS), has been elected the next president of Serbia. In the run-off vote between the two leading candidates on 20 May 2012, the estimate of the observer group CeSID is that Nikolić has received 49.7%, exceeding the 47% received by the incumbent Boris Tadić. In defeating Tadić, who has been Serbia's president since 2004, Nikolić has also overturned the general expectations surrounding Serbia's immediate political future. Yet the outcome, narrow as it is, reflects concerns and apprehensions among the Serbian electorate that were already apparent before the first round of voting on 6 May (the same day as the French presidential and Greek parliamentary elections, which meant the event was to a great extent neglected in the international media).

Opening Europe’s Mediterranean Window - Ana Palacio. Exit from comment view mode. Click to hide this space MADRID – One year after the fall of Hosni Mubarak, with popular upheavals continuing to roil the Arab world, it is increasingly clear that Europe can no longer sit still and do nothing. "A Post-Arab Spring Strategy" by Volker Perthes. Exit from comment view mode. Click to hide this space BERLIN – More than a year into the Arab revolts, their outcomes remain highly uncertain. But some initial lessons for international politics – and for Western, particularly European, foreign policy – merit serious consideration. Almost everyone was surprised by the revolts, although the political and socioeconomic causal factors were well known. As is often true in crises that become systemic, we knew the phenomena, but failed to grasp their interaction, in part because politicians and analysts are unwilling to anticipate ruptures: the familiar is held to be stable even when it is known to be problematic.

"Islam’s European Hope" by Shlomo Ben-Ami. Exit from comment view mode. Click to hide this space MADRID – Mohamed Merah’s killing spree in and around Toulouse in March, like the 2004 Madrid train bombings and the 2005 suicide attacks in London’s Underground, has highlighted once again the dilemmas that Europe faces with regard to its growing Muslim minority. No social-integration model has proven to be free of flaws.

U.S.-Europe-Asia: The new strategic triangle. Trilateral dialogues come in many forms. Those that mix allies with competitors can have the deleterious consequences of diminishing like-mindedness for the sake of inclusivity. More successful trialogues combine like-minded countries that can bring capabilities to bear in ways that cut across national and regional divides, creating an effect that is greater than the sum of its parts. One of the unfortunate consequences of the rhetoric surrounding the U.S. "pivot" to Asia was the perception that Washington, even as it intensified its commitment to trans-Pacific leadership, was pivoting away from Europe, home to its historic allies.

U.S. "Europe’s Three Eastern Questions" by Javier Solana. Exit from comment view mode. Click to hide this space WASHINGTON, DC – Today, the European project is shaking. Of course, I am confident that the eurozone’s ongoing sovereign-debt crisis will be overcome, and that a more integrated and effective Europe will emerge. But, to get to that improved Europe, not only must the sovereign debt crisis be resolved; relations with three major countries to Europe’s east – Turkey, Russia, and Ukraine – will need to be put on more secure footing. Europe's Grandma Crisis. The Myth of Europe - by Gareth Harding. When the euro officially entered circulation at the stroke of midnight on Jan. 1, 2002, fireworks lit up the night sky across Europe to celebrate the scrapping of the French franc, German deutsche mark, Greek drachma, and a clutch of other ancient currencies.

Brussels hosted an extravagant sound-and-light show, while Frankfurt unveiled a five-story statue of the freshly minted euro as a pop band belted out "With Open Arms (Euro World Song). " European Identities Part I. European Identities Part II. The Strange Triumph of Liberal Democracy. The Weekend Interview With Norman Davies: The Emperor of Vanished Kingdoms. EU democracy in crisis: mired in a perfect storm or rebounding? The Construction of Europe - The Time for Games is Over. Does it get more transparent than this? "Dark Continent" by Paulina Neuding. Exit from comment view mode. Europe’s Own Human Rights Crisis. Europe invents the Gypsies - Klaus-Michael Bogdal The dark side of modernity.

The EU's Roma role. Europe’s Squandered Minority - Zeljko Jovanovic. Jeremy Harding · Europe at Bay: The Immigration Battle · LRB 9 February 2012. "The Euro’s Imagined Community" by Robert J Shiller. The Eurocratic assault on democracy. "Europe’s Trust Deficit" by Barry Eichengreen. Southern Europe fears summer of violence. Austerity and the End of the European Model. "The Triumph of Politics in Europe" by Shlomo Ben-Ami. Making the fiskalpakt Ireland-proof. The Crisis of European Democracy. An open letter to the leaders of Europe: abandon the Euro's 'gold fetters' "Shards of Europe" by Harold James. Beware the rise of EU anti-populists. The Euromess: A Letter from Madrid - Ana Palacio. "Europe’s Fairness Crisis" by Giles Merritt. All over Europe: from Pirates to Le Pen. "Who’s Afraid of Europe’s Human-Rights Court?" by James A. Goldston and Yonko Grozev.

Václav Havel’s Life in Truth - Jiří Pehe. Interview with Czech Foreign Minister: 'We Have to Move Away from a Europe of Small Minds' - SPIEGEL ONLINE - News - International. Havel's Specter: On Václav Havel. Art and Politics: What Would Vaclav Havel Do? What Integration Means For Germany's Guest Workers.