How do planets form? An interview with a planetary scientist - skyatnightmagazine. Dr Farzana Meru is an assistant professor and Royal Society Dorothy Hodgkin Fellow at the University of Warwick. 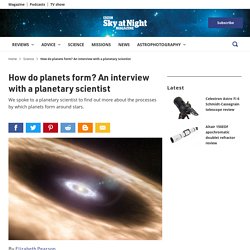 Her research is on the formation of planets, and she uses a variety of techniques to investigate how they grow. BBC Sky at Night Magazine spoke to Dr Meru to find out more about planet formation. Where do planets form? Planets form in discs made of gas and dust — called protoplanetary discs — that swirl around their central star. 4.6 billion years ago our own Sun would have had one of these discs, which went on to form the planets. How does the formation process work? There are two ways we think planets form. As this core becomes more massive, its gravity pulls more dust and gas onto it, forming a terrestrial planet.

Another way in which planets can form is through gravitational instability. In the early stages of a protoplanetary disc’s life, it is so massive that its own gravity causes spirals to form — similar to the spiral features in a galaxy. We are just beginning to do this. Alien Earths Online - www.alienearths.org. Sky. Image may be subject to copyright Terms of Use Image Credit: DSS Consortium, SDSS, NASA/ESA. 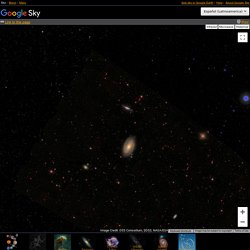 Look up your star in the Online Star Register! Apollo 17 in Real-time. USGS Astrogeology: Map-a-Planet. 10 Things That Happen To An Exposed Human In Space. Space We’ve all seen it in sci-fi movies: Someone gets sucked out of a spaceship and thrown into the emptiness of space. 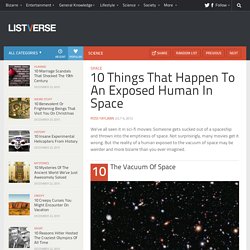 Not surprisingly, many movies get it wrong. But the reality of a human exposed to the vacuum of space may be weirder and more bizarre than you ever imagined. 10 The Vacuum Of Space First things first—if the exterior of your spaceship is compromised (punctured by a whizzing asteroid perhaps) the interior will rapidly depressurize, and you will be sucked out into the vacuum of space. The ship would initially be pressurized in order to mimic earth’s atmosphere and maintain a proper, livable environment. 9 Extreme Swelling Remember Veruca Salt from Willy Wonka and the Chocolate Factory who puffed up like a giant blueberry?

8 Exposure To Sunlight A day at the beach can be ruined by a painful sunburn—especially if you forget your sunblock. 7 Suffocation By Hypoxia 6 Rapid Cooling On a hot day, our bodies produce sweat to cool down. 5 Decompression Sickness 4 No Blood Pressure. Space News, Astronomy News, Telescopes, Astrophotography, UFOs. Find planets and constellations in the night sky - AstroViewer. The Big Bang Theory in Plain English! Aboriginal Astronomy. The Emu in the Sky The photograph above shows the aboriginal "emu-in-the-sky" constellation in the sky. 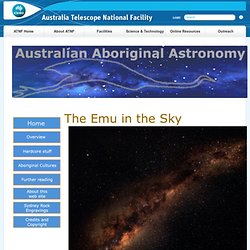 It won its creator, Barnaby Norris, third prize in the prestigious 2007 "Eureka" awards. To see the "constellation", look at the dark dust-clouds, not the stars! Dreaming of the sky. Just as ecologists are increasing their understanding of the Australian environment through studying Aboriginal stories and talking to tribal Elders, so astronomers are beginning to appreciate Indigenous knowledge of the sky. 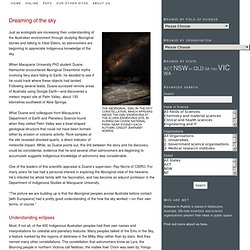 When Macquarie University PhD student Duane Hamacher encountered Aboriginal Dreamtime myths involving fiery stars falling to Earth, he decided to see if he could track where these objects had landed. Following several leads, Duane surveyed remote areas of Australia using Google Earth—and discovered a meteor impact site at Palm Valley, about 130 kilometres southwest of Alice Springs. What Duane and colleagues from Macquarie’s Department of Earth and Planetary Science found when they visited Palm Valley was a bowl-shaped geological structure that could not have been formed either by erosion or volcanic activity. Rock samples at the site revealed shocked quartz, a direct indicator of meteorite impact. Understanding eclipses. Aboriginal astronomers: world's oldest? THERE’S GROWING EVIDENCE THAT Australia’s indigenous people could be the world’s oldest astronomers, according to astrophysicist Ray Norris, who is based at CSIRO's Australia Telescope National Facility in Sydney. 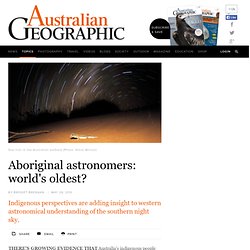 He has researched Aboriginal stories about the night sky for five years and says one of the earliest European records of indigenous astronomy was made by William Stanbridge, an Englishman who emigrated to Australia in 1841 and ran sheep at Lake Tyrrell, in northern Victoria. Stanbridge befriended members of the local Boorong people. They showed him how they viewed the constellations and Stanbridge published their stories in his 1857 essay On the Astronomy and Mythology of the Aborigines of Victoria. 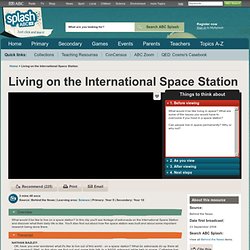 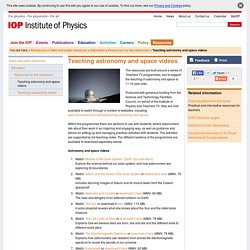 Produced with generous funding from the Science and Technology Facilities Council, on behalf of the Institute of Physics and Teachers TV, they are now available to watch through a number of websites, including www.schoolsworld.tv/series/teaching-astronomy-and-space. Within the programmes there are sections to use with students, where astronomers talk about their work in an inspiring and engaging way, as well as guidance and advice on setting up and managing practical activities with students. The activities are supported by full teaching notes. The different sections of the programmes are available to download separately below. Astronomy Online. Education. Nightskyonline.info. Exploring Planets in the Classroom: Hands-on science activities.

Exploring Planets in the Classroom was a long-running summer workshop in Planetary Geosciences offered at the University of Hawai‘i at Manoa for the state's K-12 educators and librarians under the direction of Dr. 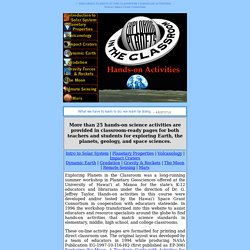 G. Jeffrey Taylor. Hands-on activities in this course were developed and/or tested by the Hawai‘i Space Grant Consortium in cooperation with educators statewide. In 1996 the workshop transformed into this website to assist educators and resource specialists around the globe to find hands-on activities that match science standards in elementary, middle, high school, and college classrooms.

These on-line activity pages are formatted for printing and direct classroom use. Free Use Policy This is a public domain web site. How to Cite Internet Resources in a Bibliography 1. Example: Hawaii Space Grant Consortium (1996) Gelatin Volcanoes. LINKS TO STANDARDS (Links open in new windows.)