Humans could move to this floating asteroid belt colony in the next 15 years, astrophysicist says. Now more than ever, space agencies and starry-eyed billionaires have their minds fixed on finding a new home for humanity beyond Earth's orbit. 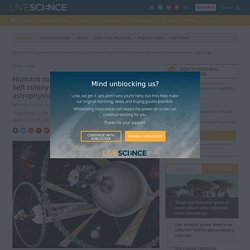 Mars is an obvious candidate, given its relatively close proximity, 24-hour day/night cycle and CO2-rich atmosphere. However, there's a school of spacefaring thought that suggests colonizing the surface of another planet — any planet — is more trouble than it's worth. Now, a new paper published Jan. 6 date to the preprint database arXiv offers a creative counter-proposal: Ditch the Red Planet, and build a gargantuan floating habitat around the dwarf planet Ceres, instead. A Fast Inflatable Sail Using Desorption. The first laboratory work on pushing a space sail with microwaves was performed by Jim and Greg Benford at the Jet Propulsion Laboratory back in 1999, with the results presented the following year at a European conference. 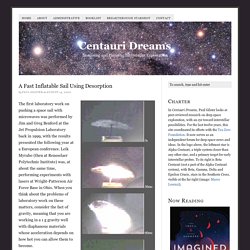 Leik Myrabo (then at Rensselaer Polytechnic Institute) was, at about the same time, performing experiments with lasers at Wright-Patterson Air Force Base in Ohio. When you think about the problems of laboratory work on these matters, consider the fact of gravity, meaning that you are working in a 1 g gravity well with diaphanous materials whose acceleration depends on how hot you can allow them to become. Seymourpowell designs Virgin Galactic spaceship cabin to maximise views of Earth. How Can We Protect Alien Life From Us—and Us From It? Is Earth the only known planetary body with life on it? 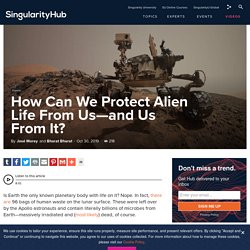 Nope. In fact, there are 96 bags of human waste on the lunar surface. These were left over by the Apollo astronauts and contain literally billions of microbes from Earth—massively irradiated and (most likely) dead, of course. 2nd-Known Interstellar Visitor May Have Breezed Through Our Solar System. At first, it was just another bright, fuzzy speck in the sky. 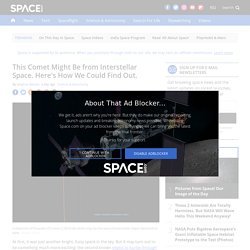 But it may turn out to be something much more exciting: the second known object to hurtle through our solar system after leaving another system. Astronomers will need a lot more observations before they can be confident giving the comet that title, but early data about the object seems promising. That would make the comet, currently known as Comet C/2019 Q4 (Borisov) after the person who first spotted it, the first traveling successor to the interstellar object 'Oumuamua, which was discovered in October 2017. Think Living Spaceships Are Science Fiction? Think Again. Going interstellar is hard. 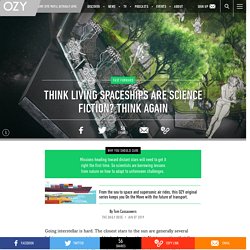 The closest stars to the sun are generally several light-years away, so a trip would take decades at best. Not to mention that the road there is perilous: Particle impacts and radiation can easily destroy a mission on its way there. Angelo Vermeulen, however, likes hard problems. Centauri Dreams — Imagining and Planning Interstellar Exploration. What Happens to the Brain in Low Gravity?

NASA has made a commitment to send humans to Mars by the 2030s. 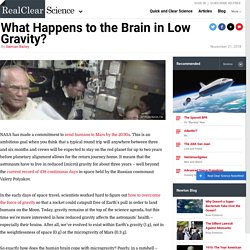 This is an ambitious goal when you think that a typical round trip will anywhere between three and six months and crews will be expected to stay on the red planet for up to two years before planetary alignment allows for the return journey home. It means that the astronauts have to live in reduced (micro) gravity for about three years – well beyond the current record of 438 continuous days in space held by the Russian cosmonaut Valery Polyakov.

In the early days of space travel, scientists worked hard to figure out how to overcome the force of gravity so that a rocket could catapult free of Earth’s pull in order to land humans on the Moon. Today, gravity remains at the top of the science agenda, but this time we’re more interested in how reduced gravity affects the astronauts’ health – especially their brains. A New Kind of Propulsion System That Doesn't Need Propellant. It Converts Electricity into Thrust and Vice Versa. Some of the best things in science are elegant and simple. 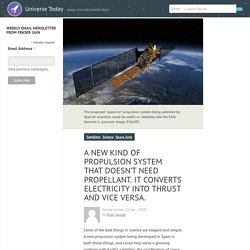 A new propulsion system being developed in Spain is both those things, and could help solve a growing problem with Earth’s satellites: the proliferation of space junk. Researchers at Universidad Carlos III de Madrid (UC3M) and the Universidad Politécnica de Madrid (UPM) in Spain are patenting a new kind of propulsion system for orbiting satellites that doesn’t use any propellant or consumables. The system is basically a tether, in the form of an aluminum tape a couple kilometers long and a couple inches wide, that trails out from the satellite.

Saturn's Moon Titan Is More Compelling Than Mars As A Long-Term Human Destination : 13.7: Cosmos And Culture. A composite image of Saturn's moon Titan taken by the Cassini spacecraft. 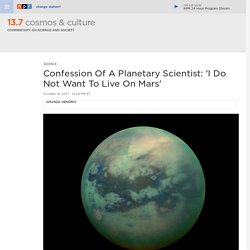 NASA hide caption toggle caption A composite image of Saturn's moon Titan taken by the Cassini spacecraft. I am a planetary scientist and once astronaut candidate finalist (read: space nerd). But I have something to confess: I do not want to live on Mars. Elon musk unveils spaceX’s moon base alpha and mars city plans. Superthin spacecraft aims to clean up space garbage. If We Don't Act Soon, Space Junk Might Trap Us On Earth. Not everything we send into space comes back down. 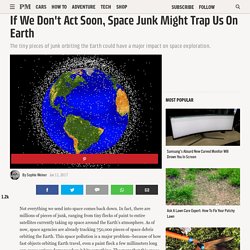 In fact, there are millions of pieces of junk, ranging from tiny flecks of paint to entire satellites currently taking up space around the Earth's atmosphere. As of now, space agencies are already tracking 750,000 pieces of space debris orbiting the Earth. Students Design Ways to Mine the Moon for Rocket Fuel. This article was originally published at The Conversation. 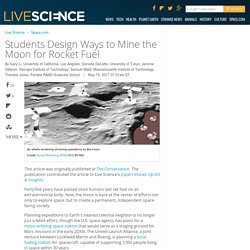 The publication contributed the article to Live Science's Expert Voices: Op-Ed & Insights. Forty-five years have passed since humans last set foot on an extraterrestrial body. Creepy Soviet Space Shuttles Are Sitting in a Kazakhstan Desert. Japan's Electric Whip Will Snare Space Junk. Japan wants what is essentially a giant electric whip on a cargo ship to take on the problem of space junk. The electrodynamic tether, or EDT, is made with the help of 106-year-old fishing net company Nitto Seimo. The Japanese space program, JAXA, plans to launch EDT as "a promising candidate to de-orbit the debris objects at low cost. " 7 ways a trip to Mars could kill you. Time-lapse video shows inflatable BEAM space habitat coming to life. It took a couple of attempts, but over the weekend NASA successfully inflated the Bigelow Expandable Activity Module (BEAM) attached to the International Space Station (ISS).

In case you weren't onsite with seven-plus hours to spare, NASA has released a handy time-lapse video that shows the module grow to full size. Five key findings from 15 years of the International Space Station. The International Space Station is the longest-running continuously inhabited human outpost in space – this year it celebrated its 15th anniversary. As the ISS orbits the Earth it is essentially in a state of free fall, counteracting the Earth’s gravity and providing an ideal platform for science in space.

Science aboard the ISS is decidedly cross-disciplinary, including fields as diverse as microbiology, space science, fundamental physics, human biology, astronomy, meteorology and Earth observation to name a few. But let’s take a look at some of the biggest findings. 1. The fragility of the human body. Why Blue Origin's Rocket Landing Is Big News For Space Travel. Eight objects that define the Soviet space race. EmDrive Back in the News. Martin Tajmar’s presentation at the American Institute of Aeronautics and Astronautics’ Propulsion and Energy Forum and Exposition in Orlando yesterday has been getting plenty of press.

Tajmar is looking at the device now commonly called an EmDrive, studied by Sonny White’s team at Eagleworks (Johnson Space Center) and advocated by Roger Shawyer, Guido Fetta and Chinese experimenters as a way of producing thrust in a way that seemingly violates conservation of momentum. Tajmar (Dresden University of Technology) offers a paper entitled “Direct Thrust Measurements of an EmDrive and Evaluation of Possible Side-Effects” in his presentation on apparent thrust produced by the test device. As he told WIRED (which announced that The ‘impossible’ EmDrive could reach Pluto in 18 months), the current work will not close the story. From the paper itself: Image: Physicist Martin Tajmar. Will that happen here? Aerospace Engineers Warn First-Grader’s Design For Spaceship Completely Unsafe - The Onion - America's Finest News Source. MONROEVILLE, PA—Listing off a litany of structural and technological flaws, the nation’s leading aerospace engineers issued a stern warning Thursday that local 6-year-old Bradley Koenig’s design for a spaceship is entirely unsafe.

Experts from the fields of aerodynamics, jet propulsion, and control engineering unanimously confirmed that the orange-and-purple rocket ship, which Koenig drew during Mrs. Silvestri’s first-grade class, not only raises major safety concerns, but could compromise the lives of everyone on board were it to ever go to launch. “I can’t even begin to enumerate all the safety protocols and fundamental principles of spaceflight that this particular vehicle violates,” said veteran NASA flight director Raymond Fletcher, who called the crayon-drawn spaceship the “most poorly conceived” and “shockingly hazardous” craft he had ever encountered. “The asymmetrical oval shape of the craft alone would likely cause it to break apart upon reentry into Earth’s atmosphere. Space travel may be bad for your brain – here's why.

There is bad news for those planning to go to Mars in the near future: a study in mice has suggested that radiation in space could cause cognitive decline in astronauts. However, we know from past research that mental, social and physical exercise can boost cognitive functions. With planned Mars missions moving ever closer, it might be be worth exploring activity as a way to counter radiation damage.

15 Ongoing Space Missions You Should Know About. NASA Eyes Crew Deep Sleep Option for Mars Mission. The little-known Soviet mission to rescue a dead space station. A DIY Pressure Suit for Near-Space Adventures. In 2008, Cameron Smith, an anthropology professor at Portland State University in Oregon, decided to build a space suit. What would a warp-drive ship actually look like? Artist Mark Rademaker has unveiled a set of concept images imagining what a spaceship capable of traveling to other stars in a matter of months would really look like.

Although it may look like something from the next science fiction epic and is unlikely to lift off anytime soon, his IXS Enterprise design is actually based on some hard science. View all. Bigelow Aerospace. NASA announces partners for lunar lander program. NASA has announced the selection of three US companies to develop a lunar lander to deliver payloads to the Moon’s surface. The three companies, Astrobotic Technology, Masten Space Systems, and Moon Express, won’t be receiving any funds, but will negotiate with the space agency for a partnership to exchange technical expertise and help promote the private space sector. The partnerships are part of NASA’s Lunar Cargo Transportation and Landing by Soft Touchdown (Lunar CATALYST) initiative. Like the Commercial Crew Program (CCP), where NASA called on private industry to come up with a replacement for the Space Shuttle to carry crews and cargo to the International Space Station, the CATALYST initiative is a way for the agency to get around shrinking budgets or lack of government interest by teaming with private partners.