A Fully Solar-Powered Car May Be Hitting the Road by 2019. In Brief Solar-powered cars have been thought of by many as an impossible pipedream. 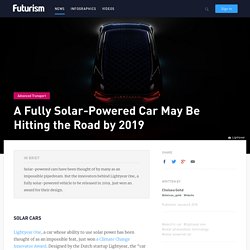 But the innovators behind Lightyear One, a fully solar-powered vehicle to be released in 2019, just won an award for their design. Solar Cars Lightyear One, a car whose ability to use solar power has been thought of as an impossible feat, just won a Climate Change Innovator Award. Designed by the Dutch startup Lightyear, the “car that charges itself” can supposedly drive for months without charging and has a 400 – 800 km range. For years, the concept of “solar-powered cars” has loomed over the electric car industry as a hopeful, possible future. Going Fully Solar. New Ship With Rigid Solar Sails Harnesses the Power of Sun and Wind at the Same Time.

In Brief Eco Marine Power has announced plans to test their patented solar sails next year. 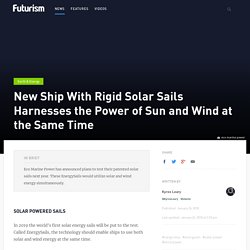 These EnergySails would utilize solar and wind energy simultaneously. Solar Powered Sails. Meet The World's First Airbag For Cyclists. The Future of High-Speed Travel: A New Kind of Hyperloop Pod Was Just Unveiled. Solar Roads, Charging Roads, And The Future Of Transportation. This week the San Francisco-Oakland Bay Bridge was lit in the greatest LED art display ever. 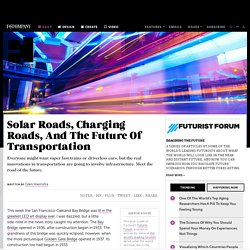 I was dazzled, but a little side-note in the news story caught my attention. The Bay Bridge opened in 1936, after construction began in 1933. Auto-Balance Bike Teaches Kids To Ride Without Training Wheels. British company creates a bicycle that is nearly impossible to topple. 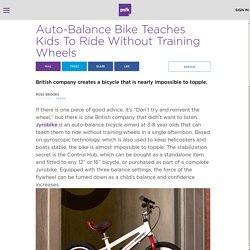 If there is one piece of good advice, it’s “Don’t try and reinvent the wheel,” but there is one British company that didn’t want to listen. Jyrobike is an auto-balance bicycle aimed at 3-8 year olds that can teach them to ride without training wheels in a single afternoon. Based on gyroscopic technology, which is also used to keep helicopters and boats stable, the bike is almost impossible to topple. The stabilization secret is the Control Hub, which can be bought as a standalone item and fitted to any 12” or 16” bicycle, or purchased as part of a complete Jyrobike. Equipped with three balance settings, the force of the flywheel can be turned down as a child’s balance and confidence increases. Speaking at the global launch of Jyrobike in London, founder and CEO Robert Bodill said:

What Commercial Aircraft Will Look Like in 2050. This article was originally published at The Conversation. 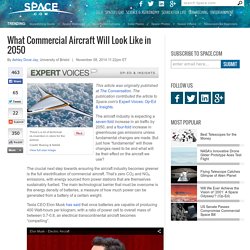 The publication contributed the article to Space.com's Expert Voices: Op-Ed & Insights. The aircraft industry is expecting a seven-fold increase in air traffic by 2050, and a four-fold increase in greenhouse gas emissions unless fundamental changes are made. New Drone Ambulance Concept Has Potential to Save Lives Faster. Gridlocked city streets, traffic signals and sirens become a non-issue in a design firm's conceptual plans for a drone ambulance. 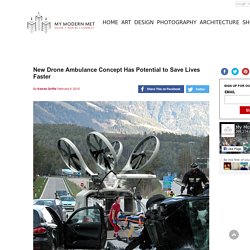 Argodesigns' lifelike renderings demonstrate how an ambulance made out of a drone could behave at accident scenes. Usefully, the drone could land in an area the size of a compact car, giving it the ability to bypass traffic and other obstructions in a speedy path between accident scenes and hospitals. The vehicle would be steered by GPS and controlled remotely. On board, there’s only room for the patient, so the on-scene EMT would stabilize the patient and then send them off on the drone to be received at the hospital. The design firm churned out the idea in response to Fast Company magazine’s prompt, “What one thing in the health care industry desperately needs to be redesigned, and how would you redesign it?” 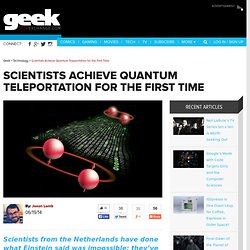 In a paper published in the Journal of Science, physicists at the Kavli Institute of Nanoscience at the Delft University of Technology said they were able to “transport information between two quantum bits separated by three meters, or about 10 feet.” This directly contradicts Einstein’s notion of particle entanglements, and is a breakthrough in quantum mechanics and information delivery. So what is quantum transportation you ask? Unlike Star Trek-esque transportation, quantum transportation utilizes entanglement, where two objects separated by distance effect one another as if they are part of the same system.

Photon Simulation Experiment Signals That Time Travel Might Be Possible Soon than We Think. In Brief University of Queensland scientists learned that a simulation of two wormhole-travelling photons might interrelate, signifying hopping through time is conceivable at smallest scales. 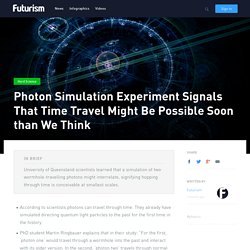 According to scientists photons can travel through time. They already have simulated directing quantum light particles to the past for the first time in the history.PhD student Martin Ringbauer explains that in their study: “For the first, ‘photon one’ would travel through a wormhole into the past and interact with its older version. Wearable submarine to hunt for 2000-year-old computer - tech - 04 June 2014. Read full article Continue reading page |1|2 Like an underwater Iron Man, a diver will fly around the wreck of an ancient Greek ship later this year, looking to shed light on the Antikythera mechanism. 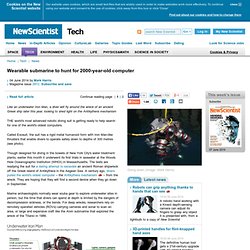 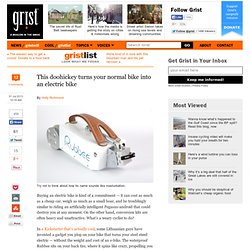 Daimler's Driverless 18-Wheelers Approved to Cruise Nevada's Highways - Singularity HUB. This summer, while road tripping through Nevada, you may pull up to the sleek silver cab of an 18-wheeler, and get a shock—the driver isn’t looking at the road, and his hands aren’t on the wheel. Is he…reading? Google's driverless car is now "fully functional" News: Google has updated its prototype self-driving vehicle to make it road worthy, adding headlights and manual steering and braking to comply with road rules in California. "We're unwrapping the best holiday gift we could've imagined: the first real build of our self-driving vehicle prototype," said Google in a statement published via its own social network G+.

The bulbous white two-seater shares its general shape with the working "mockup" the search giant's research team shared in May, when footage was released of the car driving autonomously with no steering wheel or pedals. But while the previous grey-coloured version was controlled using buttons and had no steering wheel or brake pedal, the new vehicle has been given "typical 'car' parts" to comply with updated road laws in its home state – meaning it can now be tested on public roads.

Uber's Self Driving Cars: The Coming Personal Transport Revolution. Uber CEO To Tesla: Sell Me Every Autonomous Vehicle You Create in 2020! In Brief If Tesla can build a fully-autonomous car by 2020, Uber CEO Travis Kalanick says his company would it. In fact, he'd buy every one Tesla builds. Tesla expects to produce 500,000 electric cars that year, and Uber is interested in acquiring all of them. That boast comes not directly from Kalanick himself, but from Steve Jurvetson–an early Tesla investor and board member.He claimed that autonomous driving could significantly reduce the number of taxis on New York City streets, and still allow patrons to get a ride within 30 seconds of hailing one.Tesla has been building cars equipped with hardware for the first phase of its “autopilot” autonomous technology since last fall, although the system still isn’t available to consumers.

Airbus Patented an Awesome Supersonic Aircraft Patented With Flight Path of a Roller Coaster. Hovercraft Coming To Market in 2017. Crazy Hoverbike is Capable of Flying to 10,000 Feet. New Invention - Hoverbike (2014) First Manned Tricopter Demo. VerticopterTutorial Part 1. Short on Verticopter on X-Plane 9.40. NASA Reveals Latest Warp-Drive Ship Designs. Look at the picture above. This futuristic airship was inspired by NASA's space shuttle. The Aluminum Airship of the Future Has Finally Flown. Not a Blimp, Not a Plane: The Gigantic Aeroscraft Is Ready, and It's Awesome.

China Unveils Plans to Build an 8,000 Mile High Speed Underwater Railway Line to America. In Brief China plans to build an 8,000+ mile railroad (sounds plausible) connecting China, Russia, Canada, and the U.S. that includes a 125 mile undersea tunnel spanning the Bering Strait. The plan was announced in China’s state-run newspaper, the Beijing Times, and apparently Russia is already on-board with the plan.According to the report, which cites a single expert at the Chinese Academy of Engineering, Chinese officials are considering a route that would start in the country’s northeast, thread through eastern Siberia and cross the Bering Strait via a 125-mile long underwater tunnel into Alaska.Unsurprisingly, No other Chinese railway experts have come out in support of the proposed project.