Dark Star of the Universe.

[2010.05532] Does NGC 6397 contain an intermediate-mass black hole or a more diffuse inner subcluster? Peering into a Galaxy's Core to Study Active Supermassive Black Hole. Black holes may not exist, but fuzzballs might, wild theory suggests. Black holes are, by far, the most mysterious objects in the universe. 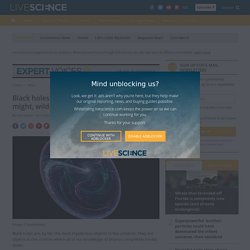 They are objects in the cosmos where all of our knowledge of physics completely breaks down. And yet, despite their apparent impossibility, they exist. But what if these gravitational monsters aren't black holes at all, but rather the cosmic equivalent of fuzzy, vibrating balls of string? New research suggests that may be the case, and that with upcoming observations we may actually be able to see them. 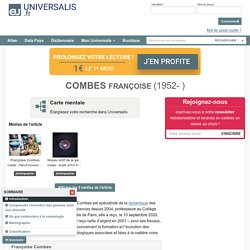 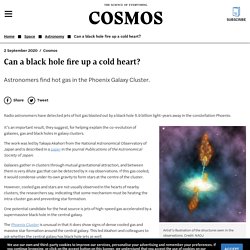 It’s an important result, they suggest, for helping explain the co-evolution of galaxies, gas and black holes in galaxy clusters. The work was led by Takaya Akahori from the National Astronomical Observatory of Japan and is described in a paper in the journal Publications of the Astronomical Society of Japan. Galaxies gather in clusters through mutual gravitational attraction, and between them is very dilute gas that can be detected by X-ray observations. If this gas cooled, it would condense under its own gravity to form stars at the centre of the cluster. However, cooled gas and stars are not usually observed in the hearts of nearby clusters, the researchers say, indicating that some mechanism must be heating the intra-cluster gas and preventing star formation. 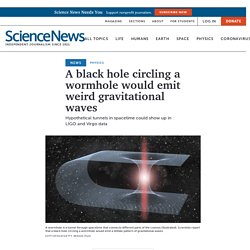 But something even stranger might be next: wormholes. A black hole spiraling into a wormhole would create an odd pattern of ripples in spacetime that the LIGO and Virgo gravitational wave observatories might be able to pick up, physicists report July 17 at arXiv.org. Le mécanisme d’allumage des jets de trous noirs (...) Black holes. Astronomers have detected the biggest explosion in the universe. The news: Astronomers have detected the biggest explosion in space that’s ever been observed. 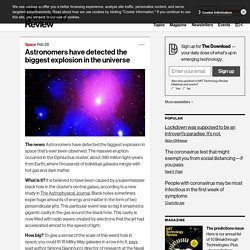 The massive eruption occurred in the Ophiuchus cluster, about 390 million light-years from Earth, where thousands of individual galaxies mingle with hot gas and dark matter. What is it? It is believed to have been caused by a supermassive black hole in the cluster’s central galaxy, according to a new study in The Astrophysical Journal. Black holes sometimes expel huge amounts of energy and matter in the form of two perpendicular jets. This particular event was so big it smashed a gigantic cavity in the gas around the black hole. What’s 50,000 times the mass of the Sun but hard to find? Astronomers say new data from the NASA/ESA Hubble Space Telescope provides the strongest evidence yet for intermediate-mass black holes (IMBH) in the Universe, confirming that one dwells inside a dense star cluster. 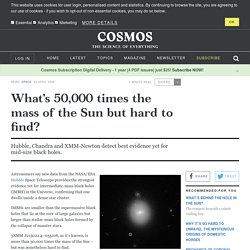 IMBHs are smaller than the supermassive black holes that lie at the core of large galaxies but larger than stellar-mass black holes formed by the collapse of massive stars. 3XMM J215022.4−055108, as it’s known, is more than 50,000 times the mass of the Sun – but was nonetheless hard to find. A team led by Dacheng Lin from the University of New Hampshire used Hubble to follow up leads from NASA's Chandra X-ray Observatory and the ESA’s X-ray Multi-Mirror Mission (XMM-Newton), which carries three high-throughput X-ray telescopes and an optical monitor to make long uninterrupted exposures providing highly sensitive observations. Is it possible for a quark star to exist? A quark is an elementary subatomic particle; three of them make up a proton or a neutron. 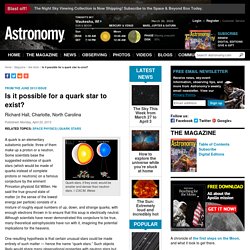 Some scientists base the suggested existence of quark stars (which would be made of quarks instead of complete protons or neutrons) on a famous conjecture by the eminent Princeton physicist Ed Witten. He said the true ground state of matter (in the sense of the lowest energy per particle) consists of a mixture of roughly equal numbers of up, down, and strange quarks, with enough electrons thrown in to ensure that this soup is electrically neutral. Although scientists have never demonstrated this conjecture to be true, many theoretical astrophysicists have run with it, imagining the potential implications for the heavens.One resulting hypothesis is that certain unusual stars could be made entirely of such matter — hence the name “quark stars.” There is currently no strong evidence that quark stars exist; however, some observations suggest they may.

Gravity waves from a ringing black hole support the no-hair theorem. For black holes, it’s tough to stand out from the crowd: Donning a mohawk is a no-no. 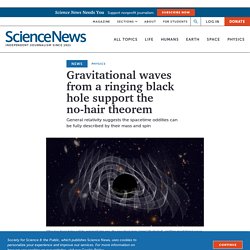 Ripples in spacetime produced as two black holes merged into one suggest that the behemoths have no “hair,” scientists report in the Sept. 13 Physical Review Letters. Black holes shouldn't echo, but this one might. Score 1 for Stephen Hawking? When two neutron stars slammed together far off in space, they created a powerful shaking in the universe — gravitational waves that scientists detected on Earth in 2017. 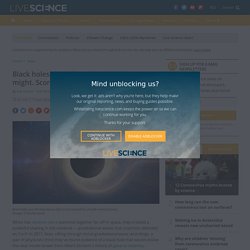 Now, sifting through those gravitational wave recordings, a pair of physicists think they've found evidence of a black hole that would violate the neat model drawn from Albert Einstein's theory of general relativity. In general relativity, black holes are simple objects: infinitely compressed singularities, or points of matter, surrounded by smooth event horizons through which no light, energy or matter can escape. Until now, every bit of data we've gleaned from black holes has supported this model. Comment les trous noirs avaleurs d'étoiles ont été découverts. More strange things lurking near Sagittarius A* By Nick Carne Astronomers have discovered four more “bizarre” objects at the centre of the Milky Way not far from the supermassive black hole Sagittarius A*. 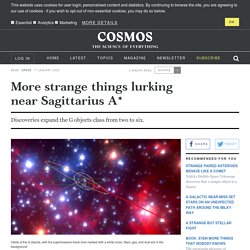 Part of a new class called G objects, they look compact most of the time and stretch out when their orbits bring them closest to the black hole. Those orbits range from about 100 to 1000 years. “These objects look like gas and behave like stars,” says Andrea Ghez, director of the Galactic Centre Group at the University of California, Los Angeles (UCLA) and co-author of a paper in the journal Nature. Strange Objects Found at The Galactic Centre Are Like Nothing Else in The Milky Way. There's something really weird in the centre of the Milky Way. The vicinity of a supermassive black hole is a pretty weird place to start with, but astronomers have found six objects orbiting Sagittarius A* that are unlike anything in the galaxy. They are so peculiar that they have been assigned a brand-new class - what astronomers are calling G objects. The original two objects - named G1 and G2 - first caught the eye of astronomers nearly two decades ago, with their orbits and odd natures gradually pieced together over subsequent years.

They seemed to be giant gas clouds 100 astronomical units across, stretching out longer when they got close to the black hole, with gas and dust emission spectra. Black holes shouldn't echo, but this one might. Score 1 for Stephen Hawking? Wandering black holes leave galactic cores. By Richard A Lovett Rather than staying sedately in the cores of their host galaxies, it seems supermassive black holes may also roam their galaxies’ outer regions, thousands of light years from their centres. Such “wandering” holes are a new class of black holes, says Amy Reines, an astrophysicist at Montana State University, US, who announced the discovery at this week’s meeting of the American Astronomical Society in Hawaii.

Deux physiciens ont présenté cette hypothèse et schématisé l'objet. « Et si la Planète Neuf était un trou noir primordial ? Hubble solves the mystery bulge at the center of the Milky Way. The Milky Way appears as a relatively flat structure when viewed along its plane in visible light. Gamma-ray emission, however, paints a different picture: two huge structures billowing outward from the galaxy’s bulge like an enormous hourglass. Named the Fermi Bubbles, these structures are the result of the Milky Way’s supermassive black hole gorging itself on interstellar gas in the past. Using the Hubble Space Telescope (HST), astronomers have now determined just when these structured formed. A team of astronomers led by Rongmon Bordoloi of the Massachusetts Institute of Technology has used distant quasars to trace the structure and motion of the northern Fermi Bubble, which rises 23,000 light-years above the plane of the Milky Way and contains enough cool gas to create 2 million Sun-size stars.

Most galaxies contain a supermassive black hole at the center, and our Milky Way is no exception. Sometimes, though, material doesn’t actually make it all the way into the black hole. Un trou noir supermassif découvert dans une galaxie minuscule. Physicists Think They've Spotted the Ghosts of Black Holes from an Another Universe. This story was updated on Aug. 23 at 9:20 a.m. E.T. We are not living in the first universe. There were other universes, in other eons, before ours, a group of physicists has said. Like ours, these universes were full of black holes. 'Ghost black hole' from a previous universe is 'found' by astrophysics. Scientists have found that the universe we live in is not the first one to ever exist. A group of leading physicists have found that eons ago, other universes existed and they had black holes, just like the current universe. They say that cosmic microwave background radiation (CMB) - the same thing that causes white noise on TVs - is evidence of the remnants of these blackholes.

Scroll down for video. Black Holes, Quantum Information, and the Structure of Spacetime. In the last six months, Juan Maldacena, Carl P. Feinberg Professor in the School of Natural Sciences, has received three major awards: the Lorentz Medal of the Royal Netherlands Academy of Arts and Sciences; the 2018 Einstein Medal from the Albert Einstein Society in Bern; and most recently the Richard E. Prange Prize and Lectureship in Condensed Matter Theory and Related Areas. The awards have recognized his groundbreaking contribution to the understanding of the quantum physics of black holes.