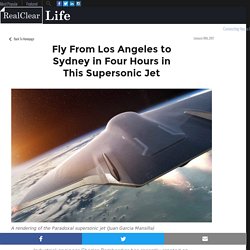 It’s called the Paradoxal, and it is designed to shuttle hundreds of passengers long distances in a fraction of the time it currently takes a commercial airliner. As detailed in an article on Forbes.com, Bombardier says the Paradoxal could be built and operated today with a bit of technological development. The supersonic jet, which looks like a huge stingray, would be able to fly from Los Angeles to Sydney, Australia, in less than four hours. Why Tesla’s new solar roof tiles and home battery are such a big deal. 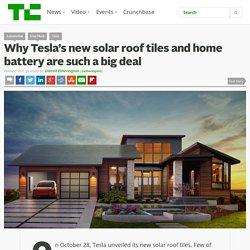 Few of us in attendance, if any, realized the solar roofing tiles were actual functional solar panels until Elon Musk said so. These Are The Top 10 Emerging Technologies Of 2016. The World Economic Forum’s annual list of emerging technologies, released this summer, include both familiar and unfamiliar discoveries. 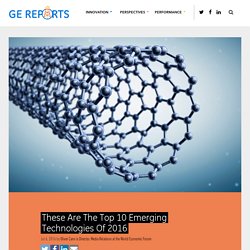 Experts believe this is the year they will most impact individuals, businesses and society. A diverse range of breakthrough technologies, including batteries capable of providing power to whole villages, “socially aware” artificial intelligence and new generation solar panels, could soon be playing a role in tackling the world’s most pressing challenges, according to a list published by the World Economic Forum. “Technology has a critical role to play in addressing each of the major challenges the world faces, yet it also poses significant economic and social risks. “Horizon scanning for emerging technologies is crucial to staying abreast of developments that can radically transform our world, enabling timely expert analysis in preparation for these disruptors.

Tech breakthroughs megatrend: Technology: PwC. We believe that these technologies will shake things up across all five aspects of your business model - some in very beneficial ways, and some in quite challenging ways, as seen in the following snapshots. 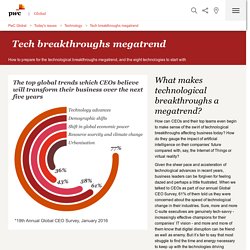 Strategy: If strategy is about defining “what business to pursue,” then these technologies are opening up a slew of new opportunities and corresponding considerations. Customer Engagement: The eight key technologies are already reshaping almost every dimension of companies’ interactions with their customers, from sales and marketing to billing and after-sales support. Operations: Artificial intelligence, robots, drones, and 3D printing can all improve operational efficiency and provide significant competitive advantage.

People and talent: The eight technologies are creating brand-new job categories, but a worrying consequence may be slower job growth. Concurrently, new technologies beget new companies and new job categories. Your job now. How Chromebooks Are About to Totally Transform Laptop Design. Google’s first Chromebook was the kind of laptop you’d design if you didn’t give a damn about laptop design. 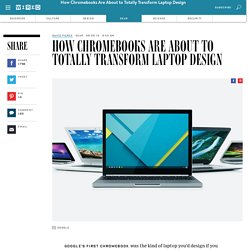 It was thick, heavy, rubbery, boring, and black. Black keys, black body, black trackpad, black everything. UC Irvine Accidentally Invents a Battery that Lasts Forever - The Drive. What do Viagra, popsicles, Corn Flakes, Ivory soap, the kitchen microwave, and champagne have in common? 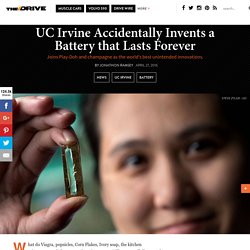 They were all discovered by accident. Add ultra-long-lasting nanowire batteries to that list, thanks to a team of researchers at the University of California Irvine. The average laptop battery is rated anywhere from 300 to 500 charge cycles – completely full to completely empty to completely full again – longer if you don’t use it all up before recharging. New "light recycling" incandescent bulbs could outperform energy-efficient LEDs. The traditional incandescent light bulb may have been a massive boon to humanity since its development in the 19th century, but its extremely low energy efficiency has seen an international phase-out in recent years in favour of more environmentally friendly alternatives. 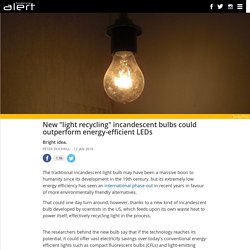 That could one day turn around, however, thanks to a new kind of incandescent bulb developed by scientists in the US, which feeds upon its own waste heat to power itself, effectively recycling light in the process. The researchers behind the new bulb say that if the technology reaches its potential, it could offer vast electricity savings over today's conventional energy-efficient lights such as compact fluorescent bulbs (CFLs) and light-emitting diode bulbs (LEDs). New Hybrid Electrolyte For Solid-State Lithium Batteries. Scientists at the U.S. 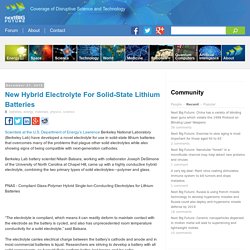 Department of Energy’s Lawrence Berkeley National Laboratory (Berkeley Lab) have developed a novel electrolyte for use in solid-state lithium batteries that overcomes many of the problems that plague other solid electrolytes while also showing signs of being compatible with next-generation cathodes. Berkeley Lab battery scientist Nitash Balsara, working with collaborator Joseph DeSimone of the University of North Carolina at Chapel Hill, came up with a highly conductive hybrid electrolyte, combining the two primary types of solid electrolytes—polymer and glass. The Moral Failure of Computer Scientists. Computer scientists and cryptographers occupy some of the ivory tower’s highest floors. 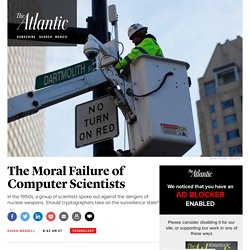 Among academics, their work is prestigious and celebrated. To the average observer, much of it is too technical to comprehend. The field’s problems can sometimes seem remote from reality. Germany Just Successfully Fired Up A Nuclear Fusion Reactor. Controlled nuclear fusion – a clean, near-perpetual source of energy – would revolutionize the world. 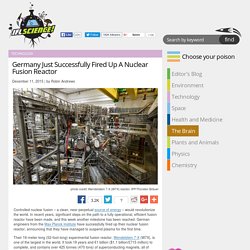 In recent years, significant steps on the path to a fully operational, efficient fusion reactor have been made, and this week another milestone has been reached: German engineers from the Max Planck Institute have successfully fired up their nuclear fusion reactor, announcing that they have managed to suspend plasma for the first time. Their 16-meter-long (52-foot-long) experimental fusion reactor, Wendelstein 7-X (W7X), is one of the largest in the world. New Substance Is Harder Than Diamond, Scientists Say. Until recently, diamond was the hardest known naturally occurring material.

But a new physical process applied to carbon has uncovered a substance that a group of scientists say is even harder. Researchers at North Carolina State University say they have developed a technique for creating a substance they are calling Q-carbon, which represents a third phase, or distinct form, of carbon alongside graphite and diamond. The discovery could have many applications, notably in the fields of medicine and industry. But Jay Narayan, the lead scientist on the study, has made one claim about the technique that is certain to turn heads. Sonic Tractor Beam can levitate and manipulate objects in midair and will scale up to levitate and move soccer ball sized objects.

The world’s first sonic tractor beams that can lift and move objects using soundwaves have been built by a team that includes researchers at the University of Sussex. Researchers at the Universities of Sussex and Bristol, in collaboration with Ultrahaptics, have now built a working tractor beam that uses high-amplitude soundwaves to generate an acoustic hologram that can pick up and move small objects. The team is now designing different variations of this system. A bigger version with a different working principle that aims at levitating a soccer ball from 10 meters away; and a smaller version, targeted at manipulating particles inside the human body.

It could be developed for a wide range of applications.

Artificial intelligence. Nanotechnology. Automobiles and transport. Robotics. Quantum physics. Mobiles and gadgets. Space. Internet of things. Quantum computing etc. Boeing has made a metal structure light enough to sit on top of a dandelion. NASA created a material that can heal itself in seconds—even from bullets. Making hydrogen fuel from water and visible light at 100 times higher efficiency. Superconductivity record sparks wave of follow-up physics. The Lexus Hoverboard: It's here. Sorry, but the jobless future isn’t a luddite fallacy. The arrival of self-driving cars is terrible news for anyone who makes a living driving. History, Travel, Arts, Science, People, Places. Siemens and Emrax claim best power to weight ratio for electric motors in the 5 to 10 kilowatt per kg range.

Siemens researchers have developed a new type of electric motor that, with a weight of just 50 kilograms, delivers a continuous output of about 260 kilowatts – five times more than comparable drive systems. Intel: Moore's Law will continue through 7nm chips. Eventually, the conventional ways of manufacturing microprocessors, graphics chips, and other silicon components will run out of steam. Boeing Is Working on a Real Live Force Field. Another startup steps up to build the hyperloop. Tech remorse: the worst gadgets we ever bought. How Magic Leap Is Secretly Creating a New Alternate Reality. The Gates-Funded Toilet Of The Future. PhysOrg Mobile: latest science and technology news. Skype’s new service is like a Star Trek universal translator for the real world. DARPA amplifier circuit achieves speeds of 1 trillion Hz, enters Guinness World Records. Google reveals it is developing a computer so smart it can program ITSELF. "So Badass You Can't Believe It" Magic Leap Raises $542 Million To Launch The Future Of Computing.

Knowledge and Artificial Intelligence: When Machines Know. Physicists Want To Know If We're All Actually Living in a Hologram. World's strongest material acts like a tiny transistor. Reactionless motor: Needs more evidence. Identifies the Top 10 Strategic Technology Trends for 2014. The Five Biggest Threats To Human Existence. Hologram Projectors For Your Smartphone Could Be Close. Gecko-Inspired Climbing Paddles Allow A Man To Climb A Glass Wall. Emerging Neuro and Cognitive Technologies. About Spritz. Sturdy 3D Material Behaves Like Graphene. China makes graphene reinforced aluminum that is up to 58% stronger than regular aluminum alloys and uses just 0.3% graphene. Driverless Cars: Optional by 2024, Mandatory by 2044. Google Glass Doesn’t Have a Privacy Problem. You Do.

Supercooled Helium Does Things That Don't Seem Possible. Icist suggests some types of wormholes may stay open long enough to send a photon through. Handheld scanner analyzes the chemical makeup of any physical object. Scientists Work Out How To Make Matter From Light. Flexible supercapacitor raises bar for volumetric energy density; Could be woven into clothes to power devices. This Farmer Reinvented the Wheel to Build a Better Wheelchair. Scientists Create Most Powerful Acoustic Tractor Beam To Date. A Macroscopic Tractor Beam with Acoustic Waves. Make It So - Brian Koberlein. Project Plans Brain-Control Exoskeleton Kickoff for the 2014 World Cup. Five wonder materials that could change the world. This Could Be the First Animal to Live Entirely Inside a Computer.

Aeromobil flying car prototype gets off the ground for the first time.