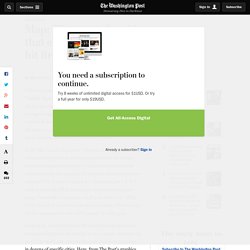 STRATEGIC REPORT IRES_2017.pdf. Climate Change Is the World's Biggest Risk, in 3 Charts. The rise of the machines isn’t the biggest threat to humanity. 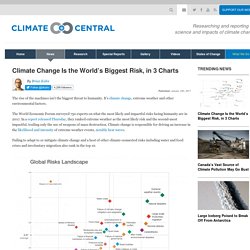 This is what it would take for Trump to truly damage the planet’s climate. President-elect Donald Trump speaks during an election night rally, Wednesday, Nov. 9, 2016, in New York. 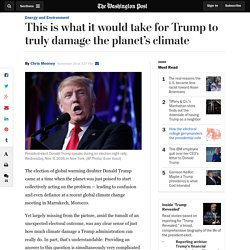 (AP Photo/ Evan Vucci) The election of global warming doubter Donald Trump came at a time when the planet was just poised to start collectively acting on the problem — leading to confusion and even defiance at a recent global climate change meeting in Marrakech, Morocco. Yet largely missing from the picture, amid the tumult of an unexpected electoral outcome, was any clear sense of just how much climate damage a Trump administration can really do. In part, that’s understandable: Providing an answer to this question is simultaneously very complicated and very speculative.

Climate Change And The Astrobiology Of The Anthropocene : 13.7: Cosmos And Culture. You can't solve a problem until you understand it. 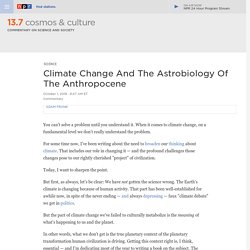 When it comes to climate change, on a fundamental level we don't really understand the problem. For some time now, I've been writing about the need to broaden our thinking about climate. That includes our role in changing it — and the profound challenges those changes pose to our rightly cherished "project" of civilization. Today, I want to sharpen the point. 2016 Climate Change Survey Results - Warren Business Consulting. The 2016 results of our annual Climate Change survey are out. 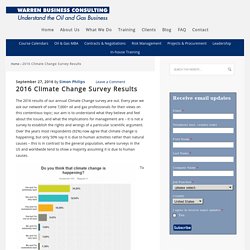 Every year we ask our network of some 7,000+ oil and gas professionals for their views on this contentious topic; our aim is to understand what they believe and feel about the issues, and what the implications for management are – it is not a survey to establish the rights and wrongs of a particular scientific argument.

Over the years most respondents (92%) now agree that climate change is happening, but only 50% say it is due to human activities rather than natural causes – this is in contrast to the general population, where surveys in the US and worldwide tend to show a majority assuming it is due to human causes. To mitigate Climate Change, inevitably, oil and gas professionals would prefer to see a reduction in deforestation and the use of coal rather than a reduction in the use of oil and gas; and as alternatives they prefer the use of nuclear and solar power.

No fracking, drilling or digging: it’s the only way to save life on Earth. Do they understand what they have signed? 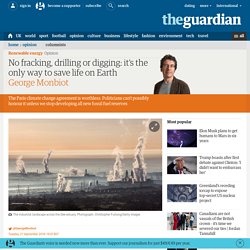 Plainly they do not. What the ‘sixth extinction’ will look like in the oceans: The largest species die off first. Atlantic bluefin tuna are corralled by fishing nets during the opening of the season in 2011 for tuna fishing off the coast of Barbate, Cadiz province, southern Spain. 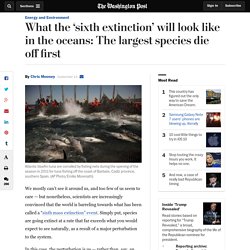 (AP Photo/Emilio Morenatti) We mostly can’t see it around us, and too few of us seem to care — but nonetheless, scientists are increasingly convinced that the world is barreling towards what has been called a “sixth mass extinction” event. Simply put, species are going extinct at a rate that far exceeds what you would expect to see naturally, as a result of a major perturbation to the system. In this case, the perturbation is us — rather than, say, an asteroid. As such, you might expect to see some patterns to extinctions that reflect our particular way of causing ecological destruction. From sharks to whales, giant clams, sea turtles, and tuna, the disproportionate threat to larger marine organisms reflects the “unique human propensity to cull the largest members of a population,” the authors write. business. 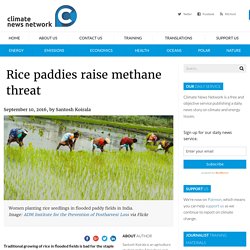 RAMPUR, Nepal, 10 September, 2016 − Directly seeding rice into fields rather than transplanting it into flooded paddies would dramatically reduce methane emissions and slow down climate change, according to scientists studying the staple crop. A number of experiments in Asia, particularly in the Philippines and Japan, show that a change in the way rice is grown would have considerable other benefits in saving water and improving yield. However, in Asia, which accounts for 90% of rice production, only a quarter of the crop is currently produced by direct seeding. The research, cited by the UN Food and Agriculture Organisation, says that while rice is a staple food for more than half the world’s population, growing it is becoming less profitable because of the costs of labour, shortage of water and high energy costs. Fasten your seat belt – turbulence is on the rise. United Airlines Flight 880 was carrying more than 200 passengers from Houston, Texas, to London’s Heathrow airport two weeks ago when it was battered by turbulence that threw people on to the cabin ceiling. 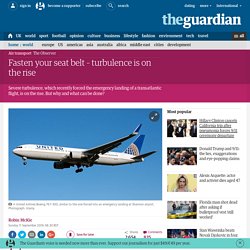 Twenty-three people were injured. “We were flying along as smooth as can be and then were just slapped massively from the top as if someone had torpedoed us,” one passenger told journalists. The aircraft, a Boeing 767-300, made an emergency landing at Shannon airport and the injured were taken to University Hospital, Limerick. No one was seriously hurt but all went through a terrifying experience and one, say experts, which will increasingly affect flights.

Pope Francis says destroying the environment is a sin. Pope Francis has called for urgent action to stop climate change and proposed that caring for the environment be added to traditional Christian works of mercy such as feeding the hungry and visiting the sick. 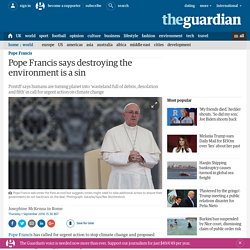 Paleoclimate data shows global warming began earlier than we thought. If you look at a graph of our instrumental temperature records (like this one) you’ll see that temperatures seem to bounce around idly until after 1900, at which point a sustained rise becomes apparent. As a result, the pre-industrial temperature is typically pegged at the value it had in the late 1800s. But a recent study published in Nature uses paleoclimate records from the 1500s to show that industrial-era warming first became apparent in the Northern Hemisphere in the mid-1800s.

This paper suggests that humanity’s climate influence can be seen earlier than previously thought, so current models may underestimate the magnitude of human-caused climate change. State of the Climate - American Meteorological Society. The climate crisis is already here – but no one’s telling us. What is salient is not important. What is important is not salient. CO2 Levels Pass 400 Parts Per Million for First Time in Human History. Photo via Shutterstock We broke a record this week — but not the good kind.

Climatic change. Kunda Dixit As another Environment Day comes around on 5 June, you can be sure that our commitment to clean air, green cities and lean living will be confined to token rallies in which school children once again will be dragooned to carry placards along Kathmandu’s roads. In the afternoon, a smattering of ministers will attend half-hearted functions in which they will read meaningless speeches to almost-asleep invitees.

And that will be it until the next Environment Day on 5 June 2017. And yet, the past 12 months have been a reminder to us in Nepal that disasters are not only of the earth-shattering kind — there are slow-moving crises like the climate calamity affecting us. It is not as immediately dramatic, but the warming earth is reaching a tipping point with almost certain catastrophic impact on the Himalaya and everything downstream. To be sure, droughts are nothing new to Nepal. Extreme weather. World's carbon dioxide concentration teetering on the point of no return. The world is hurtling towards an era when global concentrations of carbon dioxide never again dip below the 400 parts per million (ppm) milestone, as two important measuring stations sit on the point of no return.

The news comes as one important atmospheric measuring station at Cape Grim in Australia is poised on the verge of 400ppm for the first time. Sitting in a region with stable CO2 concentrations, once that happens, it will never get a reading below 400ppm. Global warming milestone about to be passed and there's no going back. Oil tax breaks in UK's budget criticised by climate campaigners. Growing, Growing, Gone: Reaching the Limits. The Limits to Growth, released in 1972, has profoundly influenced environmental research and discourse over the past four decades. Shell accused of strategy risking catastrophic climate change.

Royal Dutch Shell has been accused of pursuing a strategy that would lead to potentially catastrophic climate change after an internal document acknowledged a global temperature rise of 4C, twice the level considered safe for the planet. A paper used for guiding future business planning at the Anglo-Dutch multinational assumes that carbon dioxide emissions will fail to limit temperature increases to 2C, the internationally agreed threshold to prevent widespread flooding, famine and desertification. India's monsoons: A change in the rain. The best thing a business could do for the environment is shut down.

World heritage forests burn as global tragedy unfolds in Tasmania. A global tragedy is unfolding in Tasmania. World heritage forests are burning; 1,000-year-old trees and the hoary peat beneath are reduced to char. The Zika virus foreshadows our dystopian climate future. UNDP Asian Climate Change APF. A Range of Opinions on Climate Change at Exxon Mobil. The Good News on Global Warming: We've Delayed the Next Ice Age. Global warming caused by fossil fuel emissions is blamed by scientists for intensifying storms, raising sea levels and prolonging droughts. Now there’s growing evidence of a positive effect: we may have delayed the next ice age by 100,000 years or more. Understanding climate change's role in the UK's recent floods. We can't treat global browning as a standalone issue.

Climate effects on coastal regions. Glaciers and melting ice caps. Climate change & affects on flora & fauna. No Crap: Missing 'Mega Poop' Starves Earth. Those Plumes of Methane Leaking Off the Coast of Washington Are Really Bad News for the Oceans. After the VW scandal, how can we trust business to act on climate change? Earth now halfway to UN global warming limit. It’s Not Climate Change — It’s Everything Change — Matter. This Isn't Academic: Millions Of People Will Die If We Don't Stop Destroying The Planet.

Study Finds Indigenous Land Management Highly Effective in Combating Climate Change by David Kaimowitz. 10 reasons to be hopeful that we will overcome climate change. Three Key Global Environmental Stories to Watch in 2014. This map explains why climate change is so unfair. El Niño Looks Increasingly Likely - ImaGeo. How Climate Change Will Kill Us in the Dumbest Possible Way. Unrestrained Oil and Gas Is the Future, ExxonMobil Argues. One of the most important sustainability-related articles you have never read. New Reported NASA Doomsday Scenario - Real or a Hoax? Nasa-funded study: industrial civilisation headed for 'irreversible collapse'? Potential climate engineering effectiveness and side effects during a high carbon dioxide-emission scenario : Nature Communications. Climate change is here now and it could lead to global conflict. Met Office: Evidence "suggests climate change link to storms" New paper finds Nepal’s food security to be at high risk as climate changes.