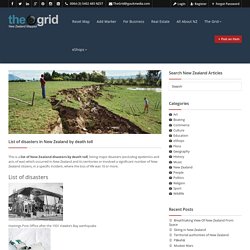 New Zealand's Greatest Natural Disaster. Before Mt Tarawera erupted on that terrifying night, the Pink and White Terraces on the shores of Lake Rotomahana near Rotorua were considered to be the eighth wonder of the world. 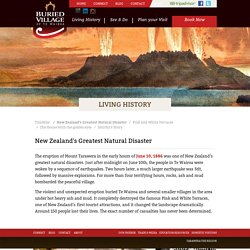 The terraces were formed as water containing silica flowed from the boiling geysers at the top down the hillside. The water cooled and crystallised into the terraces and pools, forming giant staircases or waterfalls. Click here to find out more > Hinemihi was the tribal meeting house of the Tuhourangi people of Te Wairoa. Tourists would pay one shilling for an evening of entertainment by the local Maori at the meeting house. Click here to read more > Reginald and Violet Smith purchased the 12-acre freehold property in 1931. How prepared are New Zealanders for a natural disaster?

This report outlines preparations New Zealand households have made for a natural disaster, using information from the 2010 New Zealand General Social Survey (NZGSS). 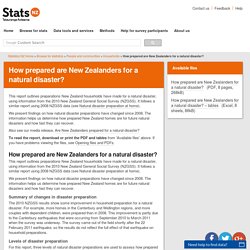 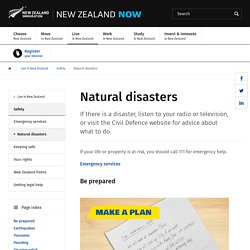 Emergency services Be prepared Disasters can and do happen in New Zealand and there are some basic things you should do to be prepared. In most emergencies you should be able to stay in your home. Plan to be able to look after yourself, your family and your pets for three days or more. The Get Thru website has information to help you be prepared. Know how to keep safe before, during and after different types of disaster create and practise a household emergency plan put together a kit of emergency survival items and keep things like batteries and water refreshed have a backpack with essential items in it in case you have to leave in a hurry. Information is available online in Simplified Chinese, Traditional Chinese, Hindi, Korean, Samoan, Tongan and Arabic. 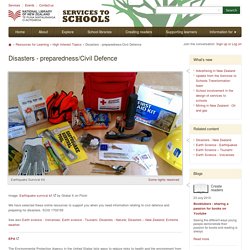 Disasters - man made. Image: Deepwater Horizon fire– April 22 2010 by US Coast Guard on Flickr We have selected these online resources to support you with information on man made disasters such as nuclear accidents, oil spills and the Great smog in London.SCIS 1702157 See also Disasters – New Zealand, Disaster preparedness/civil defence. 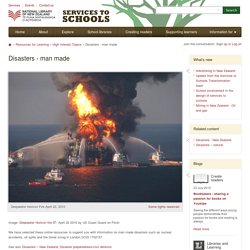 The Aral Sea Crisis The Aral Sea in Central Asia was the world’s fourth largest salt lake up until the last quarter of the 20th century. Human induced changes have resulted in a dramatic reduction in its size and an increase in salinity. Suggested level: intermediate, secondarywww.columbia.edu/~tmt2120/introduction.htm Chernobyl Accident 1986 Nuclear accidents have occurred at Chernobyl, Three Mile Island and Fukushima nuclear power plants.

Disasters – natural. Image: Flood road closed by Ian Britton on Flickr We have selected these online resources to support you when you need information relating to natural disasters such as earthquakes, floods, landslides and tsunamis. 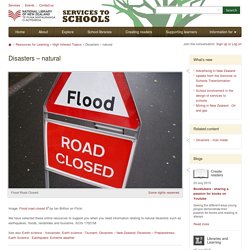 Image by Jason Blair Disasters These pages include a timeline of New Zealand disasters as well as detailed information on the Tangiwai, Wahine, Erebus disasters, and the 1918 influenza epidemic. 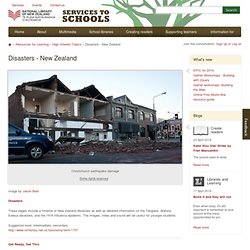