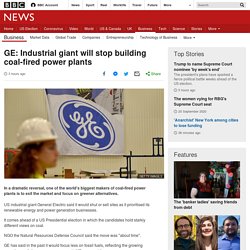 US industrial giant General Electric said it would shut or sell sites as it prioritised its renewable energy and power generation businesses. It comes ahead of a US Presidential election in which the candidates hold starkly different views on coal. NGO the Natural Resources Defense Council said the move was "about time". GE has said in the past it would focus less on fossil fuels, reflecting the growing acceptance of cleaner energy sources in US power grids. But just five years ago, it struck its biggest ever deal - paying almost £10bn for a business that produced coal-fuelled turbines. 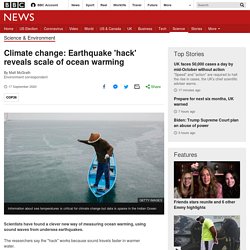 The researchers say the "hack" works because sound travels faster in warmer water. The team looked at sonic data from the Indian Ocean emitted by tremors over a 10-year period. Plug-in hybrids are a 'wolf in sheep's clothing' Image copyright Getty Images Carbon dioxide emissions from plug-in hybrid cars are as much as two-and-a-half times higher than official tests suggest, according to new research. 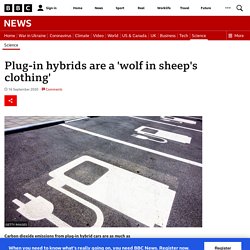 Plug-in hybrid vehicles are powered by an electric motor using a battery that is recharged by being plugged in or via an on-board petrol or diesel engine. They account for 3% of new car sales. But analysis from pressure groups Transport and Environment and Greenpeace suggest they emit an average of 120g of CO2 per km. Google says its carbon footprint is now zero. Image copyrightGetty Images Google says it has wiped out its entire carbon footprint by investing in "high-quality carbon offsets". 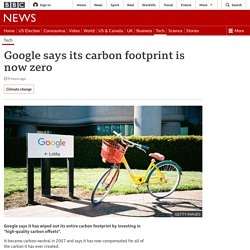 It became carbon-neutral in 2007 and says it has now compensated for all of the carbon it has ever created. Other large technology companies have also committed to reducing or eliminating their carbon use. Mr Pichai said Google's pledge to be using only carbon-free energy by 2030 was its "biggest sustainability moonshot yet". "We'll do things like pairing wind and solar power sources together and increasing our use of battery storage," he said. 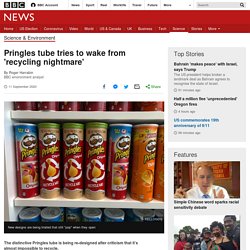 The current container for the potato-based snack was condemned as a recycler’s nightmare. It's a complex construction with a metal base, plastic cap, metal tear-off lid, and foil-lined cardboard sleeve. The Recycling Association dubbed it the number one recycling villain – along with the Lucozade Sports bottle. Now Pringles' maker Kellogg's is trialling a simpler can – although experts say it’s not a full solution. The existing version is particularly troublesome because it combines so many different materials Media playback is unsupported on your device.

The search engine boss who wants to help us all plant trees. Image copyright Shane Thomas McMillan The BBC's weekly The Boss series profiles different business leaders from around the world. 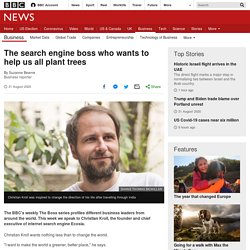 This week we speak to Christian Kroll, the founder and chief executive of internet search engine Ecosia. Christian Kroll wants nothing less than to change the world. "I want to make the world a greener, better place," he says. Dounreay site available for reuse in the year 2333. Image copyright DSRL The site of a Scottish nuclear power facility should be available for other uses in 313 years' time, according to a new report. 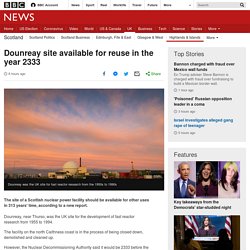 Dounreay, near Thurso, was the UK site for the development of fast reactor research from 1955 to 1994. The facility on the north Caithness coast is in the process of being closed down, demolished and cleaned up. However, the Nuclear Decommissioning Authority said it would be 2333 before the 148-acre site is safe for reuse. 'Highest temperature on Earth' as Death Valley, US hits 54.4C. Image copyright Getty Images What could be the highest temperature ever reliably recorded on Earth - 130F (54.4C) - may have been reached in Death Valley National Park, California. 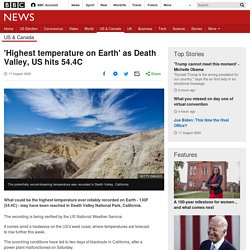 The recording is being verified by the US National Weather Service. It comes amid a heatwave on the US's west coast, where temperatures are forecast to rise further this week. Nestlé sued over tonnes of dead fish in French river. Image copyright AFP The head of a French fishing federation has lodged a complaint against global food conglomerate Nestlé, after thousands of fish were found dead in a river in north-eastern France. 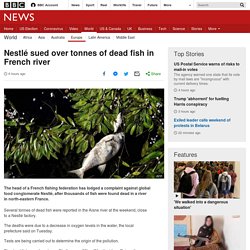 Several tonnes of dead fish were reported in the Aisne river at the weekend, close to a Nestlé factory. The deaths were due to a decrease in oxygen levels in the water, the local prefecture said on Tuesday. Tests are being carried out to determine the origin of the pollution. The dead fish were found near Challerange, 50km (31 miles) from Reims, the prefecture said in a statement. "We have lodged a complaint against Nestlé France for pollution and violation of article 432.2 of the environmental code," said Michel Adam, president of the Ardennes Fishing Federation. The damage amounts to "several thousand euros", he added. Will tech make it easier for us to grow veg? Davos: The compostable bags trying to replace plastic. News BBC News Navigation Sections Connected World Global Education Economy Previous Next Media player Media playback is unsupported on your device. 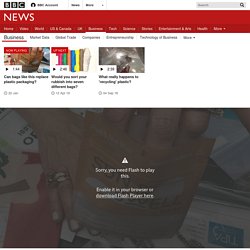 Cleantechnica. January 5th, 2020 by Steve Hanley Many of us have tunnel vision on the subject of energy storage. We think lithium-ion batteries are the beginning, middle, and end of the discussion. Largely that’s because of Elon Musk and Tesla, who have built their incredible history of success both in transportation and energy storage on lithium-ion batteries. Yet there are other types of storage solutions, many of which will begin to share the spotlight with lithium-ion batteries in 2020. The US Department of Energy’s Advanced Research Projects Agency — ARPA-E — is funding research by 10 organizations with one common goal — creating long term energy storage systems that cost $0.05 per kilowatt hour or less.

Jakarta floods: Cloud seeding used to try to stop rain. Image copyright Reuters Indonesian authorities are turning to the technique of cloud seeding to try to stop more rain falling in the flood-hit capital Jakarta. Planes have been sent to inject chemicals into clouds in an effort to alter precipitation. Jakarta and surrounding districts have struggled to cope since a storm on New Year's Eve left large areas underwater. At least 43 people are known to have died, with some 192,000 evacuated, and more rain is expected. According to Reuters news agency, two planes have been sent up to shoot salt flares into the clouds, which will hopefully make them break before they reach the Jakarta region. "All clouds moving towards the Greater Jakarta area, which are estimated to lead to precipitation there, will be shot with NaCl (sodium chloride) material," Indonesia's technology agency BPPT explained in a statement.

The Indonesian disaster management agency said it was using inflatable boats to rescue stranded families. The fight to stop Venice from flooding. Venice floods: Climate change behind highest tide in 50 years, says mayor. Media playback is unsupported on your device Severe flooding in Venice that has left much of the Italian city under water is a direct result of climate change, the mayor says. The highest water levels in the region in more than 50 years would leave "a permanent mark", Venice Mayor Luigi Brugnaro tweeted.

"Now the government must listen," he added. Beating Nature at Its Own Game. The sun was out in full force the fall morning I arrived at Caltech to visit Professor Nate Lewis’s research laboratory. Temperatures in southern California had soared to 20 degrees above normal, prompting the National Weather Service to issue warnings for extreme fire danger and heat-related illnesses. The weather was a fitting introduction to what I had come to see inside Nate’s lab—how we might be able to tap the sun’s tremendous energy to make fuels to power cars, trucks, ships, and airplanes. Stepping into the lab cluttered with computer screens, jars of chemicals, beakers, and other equipment, Nate handed me a pair of safety goggles and offered some advice for what I was about to see.

“Everything we do is simple in the end, even though there’s lots of complicated stuff,” he said. What’s simple is the idea behind all of his team’s research: The sun is the most reliable, plentiful source of renewable energy we have. Batteries are one solution. Monitoring Ilopango Caldera Fumaroles in El Salvador - Open Explorer. Logbook:Date: July 19, 2019 Report: We toured the caldera showing important points where we found the presence of the Tioerra Blanca JOven (TBJ) on the banks of La Guitarra. We witness a "degassing" event like never before seen in La Caldera del Diablo or Las Fumarolas (bubbles emerging from the bottom with a size of up to $ 0.25 cent coin).

The obligatory visit to Los Cerros Quemados could not miss, (this is the youngest piece of land in El Salvador) given its eruption in February 1880! Most importantly, the commitment to study for the first time on behalf of the local academy Caldera de Ilopango was acquired; international support will be vital in terms of the equipment of electronic devices (example: hydrophones, GPS, multimeters, etc) A multiethnic team was formed to investigate everything that happens in the Caldera, it was formed as follows: Carmen Lopez, Benancio Henriquez, Guayo Gutièrrez, Ivan Sunye Puchol, Mincho Hernandez, Alex Molina and Jose Baires Diario di Bordo.

Tourists run as chunck of ice breaks off - Iceland. Deforestation: What’s wrong with planting new forests? Is this the world's most sustainable building? The UK government is not doing enough to encourage companies to be more sustainable, the business lobby group CBI has told the Victoria Derbyshire programme. Why US bird attacks on humans are on rise.

Image copyright Getty Images Bird attacks on humans are growing more common as people continue to encroach on bird nesting territory, wildlife experts warn. Mary Heiman was walking her dog around a lake in downtown Denver, Colorado, in late July when a bird started flying uncomfortably close to her head. Bitcoin's energy consumption 'equals that of Switzerland' Image copyright University of Cambridge Bitcoin uses as much energy as the whole of Switzerland, a new online tool from the University of Cambridge shows. Could desalination help prevent water wars in the Middle East? News BBC News Navigation Sections. Would you sort your rubbish into seven different bags? Tracking the toxic air that's killing millions. Image copyright Getty Images The air we breathe is killing us. The World Health Organisation (WHO) says air pollution causes the death of seven million people a year and accounts for a third of fatalities from stroke, lung cancer and heart disease, with more than 90% of children breathing toxic air every day.

Until we tackle the root causes of air pollution - burning fossil fuels mainly - we can at least learn where and when it is likely to be at its most dangerous. Researchers Create ‘First-of-its-Kind’ Roadmap for Saving Earth From Climate Change Years Before 2050 Deadline. A Finnish university has published a comprehensive global road map on how the world can reduce its carbon emissions before the 2050 deadline – and the research says that it is quite feasible. Microplastics found in 'pristine' Pyrenees mountains.