Tech and Gear for Disasters 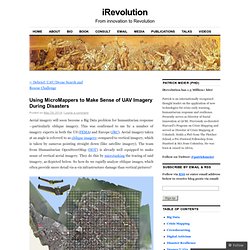 This was confirmed to me by a number of imagery experts in both the US (FEMA) and Europe (JRC). Aerial imagery taken at an angle is referred to as oblique imagery; compared to vertical imagery, which is taken by cameras pointing straight down (like satellite imagery). The team from Humanitarian OpenStreetMap (HOT) is already well equipped to make sense of vertical aerial imagery.

They do this by microtasking the tracing of said imagery, as depicted below. So how do we rapidly analyze oblique images, which often provide more detail vis-a-vis infrastructure damage than vertical pictures? One approach is to microtask the tagging of oblique images. This solution did not include any tracing and was not designed to inform the development of machine learning classifiers to automatically identify features of interest, like damaged buildings, for example. Mobile Network in a Backpack Restores Communication After Disasters. One of the most frightening aspects of a natural disaster can be the toll it takes on communication infrastructure. 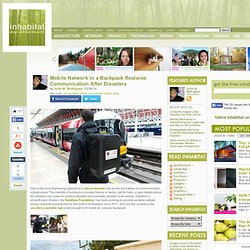 The inability of survivors to contact friends or family, call for help, or give details about the situation can make an already stressful and traumatic situation even worse. Air Rope Inflatable Rescue Tunnel for Safely Cross Flooded River. Instead of using rope pulley system, it would be much safer to use Air Rope when crossing floodwaters. 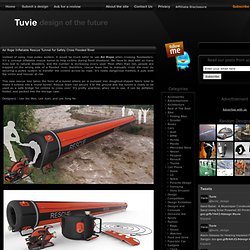 It’s a concept inflatable rescue tunnel to help victims during flood situations. We have to deal with so many lives lost to natural disasters, and the number is increasing every year. Most often than not, people are trapped on the wrong side of a flooded river, therefore, rescue team has to manually cross the river by securing a pulley system to transfer the victims across by rope. It’s really dangerous method, it puts both the victim and rescuer at risk. Torchia Solar LED Lamp/Charger for Emergency Situations. 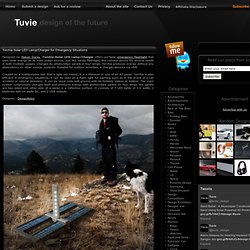 Just like handy flashlight, this concept device fits several needs in both multiple usages. Charged by photovoltaic panels in four wings, Torchia produces energy without any dependency on other energy systems. Suitable for outdoor activities, it charges devices via USB. MetAir Power Systems. Emergency Mobile Device Charger for Power Outages, Disasters by Kevin Maloney. HOW WILL YOU SURVIVE THE NEXT POWER OUTAGE, NATURAL DISASTER, OR ZOMBIE APOCALYPSE? 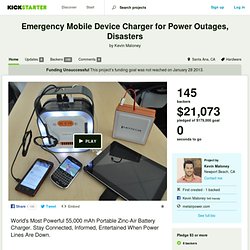 Here's a Hint: Be Prepared. Keep your mobile devices charged with the new MetAir Solstice - the world's most powerful 55,000 mAh (55 amp hour) non-rechargeable USB mobile device charger. That’s the equivalent of 115 D cell batteries under a 2amp load, at a fraction of the size, weight, and cost! Stay connected and informed with first responders, family, friends, and government agencies in the event of an emergency or disaster situation. Civil and Environmental Engineering at Illinois. Hyungchul Yoon, left, and Reza Shiftehfar display screen shots from the smart phone app they developed to assist emergency personnel in rescuing people trapped in buildings after disasters. 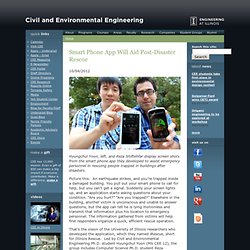 Picture this: An earthquake strikes, and you’re trapped inside a damaged building. You pull out your smart phone to call for help, but you can’t get a signal. Suddenly your screen lights up, and an application starts asking questions about your condition. MiniSWARM - Arduino WiFi Mesh. If the Internet of Things is ever going to take off, we need cheap connected computing devices. 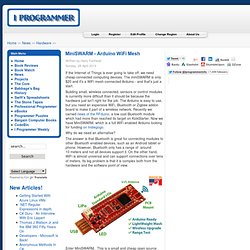 The miniSWARM is only $20 and it's a WiFi mesh-connected Arduino - and that's just a start. Building small, wireless connected, sensors or control modules is currently more difficult than it should be because the hardware just isn't right for the job. The Arduino is easy to use, but you need an expensive WiFi, Bluetooth or Zigbee addon board to make it part of a wireless network. Recently we carried news of the RFduino, a low cost Bluetooth module which had more than reached its target on KickStarter.

Now we have MiniSWARM, which is a full WiFi enabled Arduino looking for funding on Indiegogo. Why do we need an alternative? The answer is that Bluetooth is great for connecting modules to other Bluetooth enabled devices, such as an Android tablet or phone. ATmega256RFR2. Get Started. 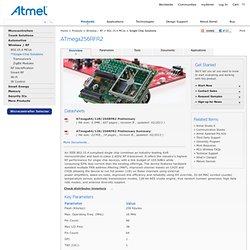 5 Innovations That Help Get Aid to Disaster Hit Communities - BORGEN. Whenever conflict or disaster hits a particular region of the world, one of the logistical challenges which must first be overcome is getting aid to every person that needs it in the shortest amount of time. 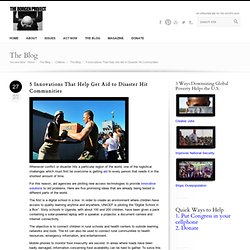 For this reason, aid agencies are piloting new access technologies to provide innovative solutions to old problems. Here are five promising ideas that are already being tested in different parts of the world: Altermnate internet. DIY internet.

Drones and Disasters. Earl - Backcountry Survival Tablet. Automatic building mapping could help emergency responders. MIT researchers have built a wearable sensor system that automatically creates a digital map of the environment through which the wearer is moving. 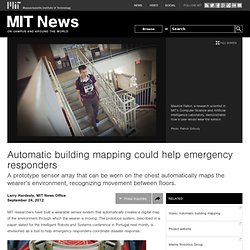 The prototype system, described in a paper slated for the Intelligent Robots and Systems conference in Portugal next month, is envisioned as a tool to help emergency responders coordinate disaster response. The prototype sensor included a stripped-down Microsoft Kinect camera (top) and a laser rangefinder (bottom), which looks something like a camera lens seen side-on.Photo: Patrick Gillooly. About Us. We deliver the essentials people need to begin rebuilding their lives in the aftermath of a disaster.