Nearly all coral reefs will be ruined by climate change. The European Union’s Copernicus Climate Change Service has announced that 2016 will be the warmest year in recorded history — by a lot. 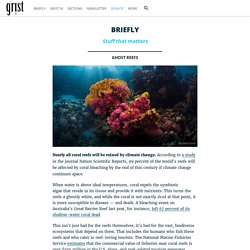 The Arctic had an especially warm year, and experienced the sharpest rise in temperatures, while Africa and Asia also felt unusually high temps. Globally, surface temperatures climbed to an average 58.6 degrees F, 2.3 degrees F higher than before the Industrial Revolution, when humans got serious about burning fossil fuels. 150,000 penguins have disappeared in Antarctica. Thanks, climate change! 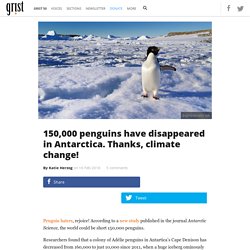 According to a new study published in the journal Antarctic Science, the world could be short 150,000 penguins. Researchers found that a colony of Adélie penguins in Antartica’s Cape Denison has decreased from 160,000 to just 10,000 since 2011, when a huge iceberg ominously named B09B became grounded in nearby Commonwealth Bay. The penguins were once a short waddle from their food source, but the arrival of the iceberg — which is nearly the size of Rhode Island — has turned that jaunt into a 75-mile round trip.

Talk about a long lunch. “It’s eerily silent now,” expedition leader Chris Turney told The Sydney Morning Herald. “The [penguins] that we saw at Cape Denison were incredibly docile, lethargic, almost unaware of your existence. How Climate Change is Bad for our Pets. Have you noticed that the flea situation in the past few years has been out of control? 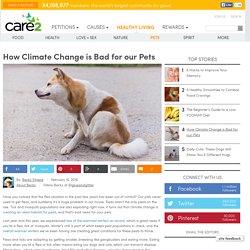 Our pets never used to get fleas, and suddenly it’s a huge problem in our house. Fleas aren’t the only pests on the rise. Antarctic Ice Shelves Face Major Threat If CO2 Emissions Keep Rising. 5 Animals that are at Risk of Extinction Because of Climate Change that Aren't Polar Bears. We’ve all seen the picture of the emaciated polar bear. 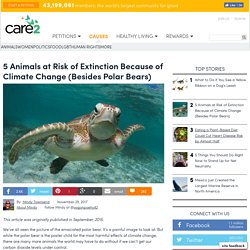 It’s a painful image to look at. But while the polar bear is the poster child for the most harmful effects of climate change, there are many more animals the world may have to do without if we can’t get our carbon dioxide levels under control. North Atlantic Right Whale The North Atlantic Right Whale is one of the most endangered animals on the planet, with only between 300-350 individuals left. These whales have been exploited by humans since the 10th century, and because their habitat is coastal, they are more vulnerable to human activity than some other whales. Sea Turtles. Warming waters are destroying your salmon burger. Thirsty birds are dying all over California — thanks, climate change. You know that historic and disastrous drought currently turning California into one big heap of straw? 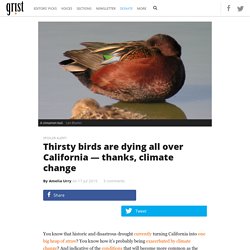 You know how it’s probably being exacerbated by climate change? And indicative of the conditions that will become more common as the climate continues to warm? Global warming may cause largest ocean species migration in 3 million years. If greenhouse gas emissions are not curtailed soon, then global warming may bring about the most sweeping re-arrangement of ocean species in at least 3 million years, according to a new study. 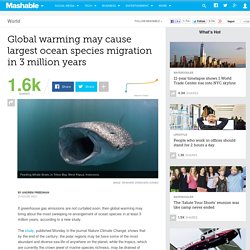 The study, published Monday in the journal Nature Climate Change, shows that by the end of the century, the polar regions may be have some of the most abundant and diverse sea life of anywhere on the planet, while the tropics, which are currently the crown jewel of marine species richness, may be drained of much of its iconic marine life. The stakes involved in which ocean species live where are high since, globally, we depend on proteins derived from fish, crustaceans and mollusks for up to a quarter of our animal protein intake, according to the World Health Organization. In 2010, fish provided more than 2.9 billion people with almost 20% of their intake of animal protein, according to the Marine Stewardship Council, and 4.3 billion people with about 15% of such protein.

Climate change could drive 1-in-6 species to extinction. Cranking up the planetary heat is going to ratchet down the planet’s biodiversity, and new analysis suggests global warming could directly threaten 1-in-6 species with extinction if polluting practices continue unabated — up from about 3 percent today. 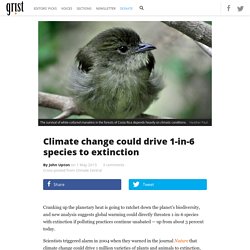 Scientists triggered alarm in 2004 when they warned in the journal Nature that climate change could drive 1 million varieties of plants and animals to extinction, but that was a rough estimate. In the decade since, researchers worldwide have been probing the dangers that could face individual species as climate change causes their ideal habitats to shift around them. Meet the invasives: Asian tiger mosquitos have feelings, too. This week is “National Invasive Species Awareness Week,” a time when we’re all supposed to be learning about the dangers of new species entering and fundamentally altering existing ecosystems. 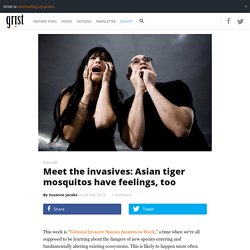 This is likely to happen more often as climate change turns up the thermostat, laying out the welcome mat for certain cold-averse species. A lot of people find invasive species worrisome. The National Wildlife Federation, for example, appears to be totally losing its shit. We, in fact, have been guilty of losing our shit. These reefs actually stand a chance of surviving climate change. Get ready for endlessly gross shrimp, thanks to climate change. Hard out here for a shrimp You may not think you care much about the mental well-being of imperiled sea spawn, but did ya know that a stressed-out shrimp does not a delicious cocktail make? 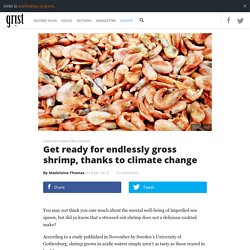 According to a study published in November by Sweden’s University of Gothenburg, shrimp grown in acidic waters simply aren’t as tasty as those reared in healthy seas. 10 birds your grandkids may never see, thanks to climate change. Long before modern times, human beings caused great extinctions of charismatic animals, including many species of birds. 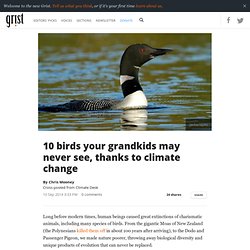 From the gigantic Moas of New Zealand (the Polynesians killed them off in about 100 years after arriving), to the Dodo and Passenger Pigeon, we made nature poorer, throwing away biological diversity and unique products of evolution that can never be replaced. But it looks like all of that may have been a meager preview to the consequences of climate change for the diversity of birds in our modern world. Such is the upshot of a vast new study by the Audubon Society’s scientists, which overall finds that by the end of the century, more than half of all North American bird species will be “threatened” by climate change. (The study did not examine the nearly 10,000 other bird species around the world, but there’s no reason to think the punchline for them would be very different.) Good news: Warming waters extend swim season. Bad news: They’re full of monster jellyfish. Bees and the crops they pollinate are at risk from climate change, IPCC report to warn. Time running out for Great Barrier Reef: scientists.

Stretching along more than 2,000 km (1,200 miles) of Australia's eastern coast is one of the world's formost natural wonders - The Great Barrier Reef as shown is this file NASA satellite image In a report prepared for this month's Earth Hour global climate change campaign, University of Queensland reef researcher Ove Hoegh-Guldberg said the world heritage site was at a turning point. "If we don't increase our commitment to solve the burgeoning stress from local and global sources, the reef will disappear," he wrote in the foreword to the report.

In this case, they suspect the outbreak was caused by infected cat feces washing into waterways before flowing into the sea, where fish and other marine organisms became contaminated before eventually being eaten by the whales, reports the Guardian. Climate change is 'killing Argentina's Magellanic penguin chicks' 29 January 2014Last updated at 20:49 ET By Matt McGrath Environment correspondent, BBC News. Climate Change Means No Food For Deep Sea Creatures. Not even those who dwell at the bottom of the sea can escape global warming. An international research team from Australia, Canada, France and the U.K. have found that those who live far below the surface of the ocean will not go unscathed due to climate change.

Specifically, two very important and currently abundant types of ocean plankton, a key component of many aquatic animals’ diets, will be adversely affected as marine ecosystems change. As scientists from the U.K.’s National Oceanography Center report in Global Change Biology, over the next century, the number of organisms that live on the sea floor will fall by more than 5 percent globally and by 38 percent in the North Atlantic.

These deep-sea communities (which live at depths of four kilometers or 2.5 miles) are bottom-feeders who rely on plants and animals that live at the ocean surface and sink bottomwards after they die for their food. Comments Daniel Jones, the study’s lead author, Species Stability Key To Climate Change Response. January 6, 2014 Image Caption: The comma butterfly is a rapidly expanding species which occurs across England and Wales and can now be found in southern Scotland. Credit: Matt Berry/Butterfly Conservation. Endangered species could be screwed by rising seas. Sea-level rise isn’t just bad news for coastal-dwelling humans.

PLOS Research Predicts Climate Change 'Winners' and 'Losers' Arctic Species at Risk from Increasing Ocean Acidity from Rising Carbon Dioxide. First Posted: Dec 03, 2013 08:41 AM EST Cyclones can whip up water and wind, creating conditions that can impact local climate and conditions. Island biodiversity in danger of total submersion with climate change. Sea level rise caused by global warming can prove extremely destructive to island habitats, which hold about 20% of the world's biodiversity. Polar bear attacks: scientists warn of fresh dangers in warming Arctic. A polar bear attack in Canada that left two people injured has brought new warnings from scientists of a dangerous rise in human-bear encounters in a warming Arctic. The friends had just walked out of the door in the pre-dawn hours after a party when the young polar bear crept up behind them, unheard and unseen. Plus de 10.000 morses rassemblés sur une petite île au large de l'Alaska.

Super-upsetting photo shows a polar bear killed by climate change. A polar bear was found dead this July in northern Svalbard, the north-most bit of Norway, located well up into the Arctic Ocean. He was, the scientists who examined him said, “little more than skin and bones,” and if you want to and you can handle it, you can click below the fold to see what that looks like. Claws and effect: Climate change turns lobsters into cannibals. Warming oceans are killing baby puffins. Painted turtles set to become all-female - life - 03 May 2013. The Shellfish Know: Climate Change Is Real. How CO2 is killing the cutest snails you haven’t seen. Snails already live in fear; now they’ve got climate change to worry about, too. Sea to Table: Climate Change Challenges New England Fishermen. Oysters Killed by Climate Change's Evil Twin. The Arctic Meltdown. Polar Bear Iceberg Sanctuary Discovered. 6 Ways Climate Change is Impacting Animals.