The SABMiller guide to tax dodging. Apple’s Tax Strategy Aims at Low-Tax States and Nations. Google's double Irish evil. Last updated 13:57 21/06/2011 Those who think foreign buyers of New Zealand assets are no different to locals might want to check out this article by Claire Rogers of the Dominion Post. 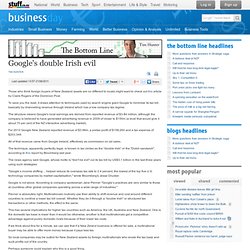 To save you the read, it draws attention to techniques used by search engine giant Google to minimise its tax bill, basically by channelling revenue through Ireland which has a low company tax regime. The structure means Google's local earnings are derived from reported revenue of $3-$4 million, although the company is believed to have generated advertising revenue in 2009 of closer to $150m (a level that would give it about 70 per cent of the NZ interactive advertising market).

For 2010 Google New Zealand reported revenue of $3.98m, a pretax profit of $158,260 and a tax expense of $203,349. All of that revenue came from Google Ireland, effectively as commission on ad sales. Google is not alone. Penner is absolutely right. Perhaps someone could explain why this is a good thing. - © Fairfax NZ News. $60 Billion Lost Annually to Tax Loophole. We're losing quite a bit of tax revenue to transfer pricing strategies: Google 2.4% Rate Shows How $60 Billion Lost to Tax Loopholes, by Jesse Drucker, Bloomberg: Google Inc. cut its taxes by $3.1 billion in the last three years using a technique that moves most of its foreign profits through Ireland and the Netherlands to Bermuda. 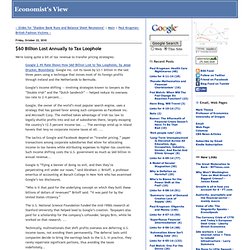 Google’s income shifting -- involving strategies known to lawyers as the “Double Irish” and the “Dutch Sandwich” -- helped reduce its overseas tax rate to 2.4 percent... Google, the owner of the world’s most popular search engine, uses a strategy that has gained favor among such companies as Facebook Inc. and Microsoft Corp. The method takes advantage of Irish tax law to legally shuttle profits into and out of subsidiaries there, largely escaping the country’s 12.5 percent income tax. ... The earnings wind up in island havens that levy no corporate income taxes at all. ... The U.S. “The system is broken and I think it needs to be scrapped,” said Avi-Yonah... Starbucks, Amazon and Google tax avoidance: What is the impact on developing countries? We give them millions of pounds every year.

It’s about time some of them gave us something back. Starbucks, the most recent multinational to come under fire for tax avoidance, has agreed to pay £20mn over the next two years, after coffee sales slumped under the weight of public protest. UK Uncut campaigners, who protested at more than 40 Starbucks branches across the country, say it’s ‘too little too latte’ and that more must be done to stop corporations dodging tax payments that could be spent on protecting welfare services. The protests, known as Refuge From The Cuts, saw Starbucks branches transformed into women’s refuges, crèches and homeless shelters to highlight the harmful human impact of spending cuts, including £5.6m being slashed from violence against women services. UK Uncut said it is outrageous that vital services are being cut in Britain while companies such as Starbucks avoid paying tax.

Alex Cobham, head of research at Save The Children, agrees. Starbucks 'paid just £8.6m UK tax in 14 years' 16 October 2012Last updated at 13:28 ET Starbucks has been doing nothing illegal but their practice has been described as "disgraceful" US coffee giant Starbucks reportedly paid just £8.6m in corporation tax in the UK over 14 years. 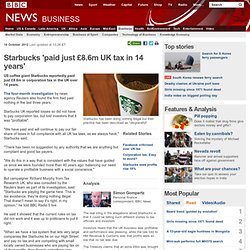 The four-month investigation by news agency Reuters also found the firm had paid nothing in the last three years. Starbucks UK reported losses so did not have to pay corporation tax, but told investors that it was "profitable". "We have paid and will continue to pay our fair share of taxes in full compliance with all UK tax laws, as we always have," Starbucks said. "There has been no suggestion by any authority that we are anything but compliant and good tax payers. "We do this in a way that is consistent with the values that have guided us since we were founded more than 40 years ago: balancing our need to operate a profitable business with a social conscience. " Continue reading the main story Analysis Simon GompertzPersonal finance correspondent, BBC News.