Broadcast Yourself. Rhino Grasshopper: site study with forces and attractors. Neri Oxman: A Mashrabiya for the Smithsonian. Voronoi diagrams. A voronoi diagram is a way of decomposition or subdivision of space based on an initial set of objects or points (for more information Voronoi diagrams have countless applications from statistics to biology and urban planning. 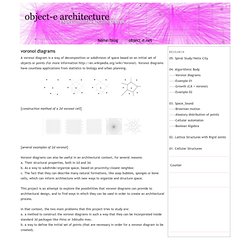 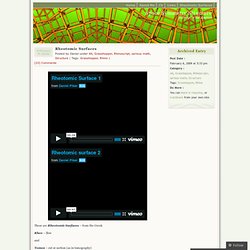 Distribution. Taxonomy120226003. Geometry from connectivity. Rheotomic surfaces and flowline generation tool. Around 3 years ago I wrote an essay on my blog about what I called rheotomic surfaces - a type of surface I had developed related to fluid flow and electrostatics, and a technique for their generation using complex numbers. 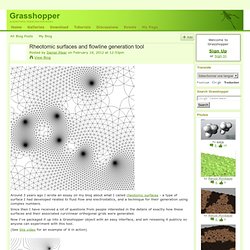 Since then I have received a lot of questions from people interested in the details of exactly how these surfaces and their associated curvilinear orthogonal grids were generated. Now I've packaged it up into a Grasshopper object with an easy interface, and am releasing it publicly so anyone can experiment with this tool. (See this video for an example of it in action) When the idea of using the streamlines of a flow to generate a surface first occurred to me, I thought the way to go about this would be to integrate a 2d vector field from various seed points and then move these lines vertically and loft between them - but after a lot of head scratching and experimentation, I was amazed to discover that it is actually possible to skip that step altogether.