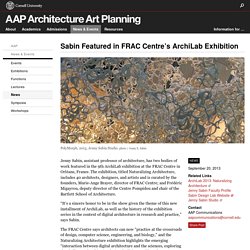 Grasshopper: from traces to grid « Ras Al-Khaimah. Annick on 08|05|2011 Filled under: day-to-day, questions Hi all, I’m making an irregular grid from traces. 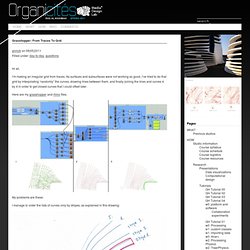 As surfaces and subsurfaces were not working so good, I’ve tried to do that grid by interpolating “randomly” the curves, drawing lines between them, and finally joining the lines and curves 4 by 4 in order to get closed curves that I could offset later. Here are my grasshopper and rhino files. My problems are these: I manage to order the lists of curves only by stripes, as explained in this drawing: Therefore I need to do the same for the 22 stripes, and have a really complicated (and heavy) file. Secondly, I have some problem with the offset. I hope you’ll be able to answer me before Thursday, Thank you. John locke » parametric. I’m really excited to introduce a new project by the Department of Urban Betterment (John Locke and Joaquin Reyes) – The Inflato Dumpster, and the accompanying KICKSTARTER campaign: A pre-emptive, heartfelt thank you! 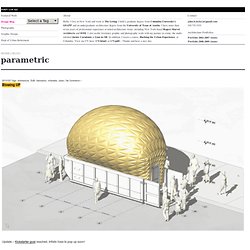 Also, please email me if you’d like to help out in any way, with any ideas for site, or just to say hi. Project Description: As public space in New York becomes increasingly privatized and commodified, The Inflato Dumpster seeks to counter that tendency by serving as an open, engaging street-level structure that acts as a mobile learning laboratory. For five days this fall, the temporary, dome-like structure will confront the tendency of city space to limit public exchange by serving as a large scale urban intervention in which workshops to create and explore the possibilities for smaller, targeted urban interventions will be produced and deployed from within.

Looking forward to seeing you in the dumpster! A link for high resolution images: PeQUOD. Atelier//studio WF - ARCHITECTURE: CFS WALL MODULAR - PROTOTYPE A (2011) Cross-Fabricated Scales (CFS) is an investigative prototype of experimental cross-fabrications between geometry and materials research, serving as a crossover between architecture and art—with a high concentration on the developmental nature of experimentation and details, relating to the scalability of a singular, yet repeated, patterning unit. 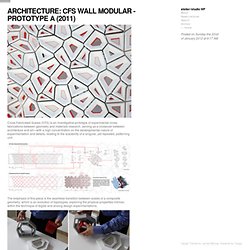 The emphasis of this piece is the seamless transition between scales of a composite geometry, which is an evolution of topologies, exploring the physical properties intrinsic within the technique of digital and analog design experimentations. In fostering the synthesis of repetition and variation within a scalable logic, Cross-Fabricated Scales anchors its design experimentation in exploring the challenges of producing a continuous surface condition through a composite unit which has the ability to seamlessly scale up through the minimized connection of parts. Credits: Phase I - Design & Project Team:Wendy W Fok, Sue Biolsi. Complex Geometry: Arquitectura de Proceso Digital. As i commented last week, i took part of a workshop about generative design as part of the creative process. with Andres Arias Madrid and Jose Ramon Tramoyeres from GGLab as Visiting Professors at Centro Universitario de Arte, Arquitectura y Diseño. i had the pleasure of sharing this project with Carlos Chenge Said, Pablo Lascurain, Martin Garcia Alvarez and Abraham Yaffer Cisneros, Architecture Students at CUAAD, a great working team, and overcoat great people. 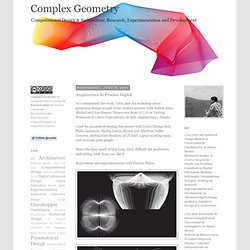 Here's the final result of that long, tired, difficult but productive and exiting week. hope you like it Exploration and experimentation with Electric Fields: The project: The proposal: The failed materialization: Unfortunately several problems and lack of time made it impossible for the fruition of the model of the project. but this is not a finished work, Electric Field is a tool that I found it very interesting and I hope to continue working, experimenting and developing new proposals. Complex Geometry: June 2011. This week i'm participating in a really interesting Workshop "Arquitectura de Proceso Digital" with Andrés Arias and José Ramón Tramoyeres of GGlab, implementing Parametrical Design as a part of the creative process, the images bellow have been generated implementing a script developed by Andrés and José on a Grasshopper definition to Generate "Electric Fields". acknowledge the initiative of CUAAD representation Department for organizing the event note: I would like to thanks my girlfriend Aye F. 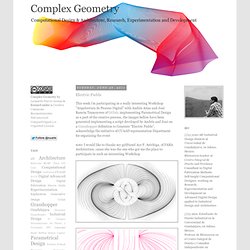 Aréchiga, of FARA Architecture, cause she was the one who got me the place to participate in such an interesting Workshop.