The 6 Step Guide to Getting Free Press for Your Startup. To be honest, I wanted to not like the guest post you’ll read today. 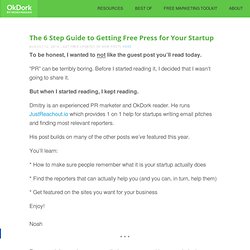 “PR” can be terribly boring. Before I started reading it, I decided that I wasn’t going to share it. But when I started reading, I kept reading. Dmitry is an experienced PR marketer and OkDork reader. He runs JustReachout.io which provides 1 on 1 help for startups writing email pitches and finding most relevant reporters. His post builds on many of the other posts we’ve featured this year. You’ll learn: * How to make sure people remember what it is your startup actually does * Find the reporters that can actually help you (and you can, in turn, help them) * Get featured on the sites you want for your business Enjoy! Noah Every week I get at least two emails from startups asking me to help them “build buzz” around their product or service. For the past 8 years I’ve been doing my own PR without hiring anybody else to help me and it has worked beautifully for me. 1.

First step is to nail down your one sentence pitch. 2. LinkedIn: Sales Hacking: A boot-strappers guide to turning $2000 into $2,000,000 in sales in 4 months. Call me a streamlining savant or a financial alchemist, but when it comes down to it, let’s get real: I’m a hustler. 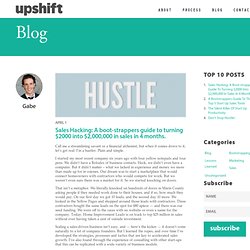 Plain and simple. I started my most recent company six years ago with four yellow notepads and four pens. We didn’t have a Rolodex of business contacts. Heck, we didn’t even have a computer. But it didn’t matter – what we lacked in experience and money we more than made up for in cojones. That isn’t a metaphor. Scaling a sales-driven business isn’t easy, and — here’s the kicker — it doesn’t come naturally to a lot of company founders. In the most general sense, the most effective way to grow our company is to focus on things that produce the most substantial results for the least cost.

Here’s how you can do the same for your business. Step 1: Profiling You likely already know about the 80/20 model as it applies to business. It’s pretty easy to deduce that your energies should be focused on catering to your most receptive target (read: the active 20%). Direct Mail & Direct Marketing Agency: Offering direct response marketing, direct mail production, design, copywriting, emails, landing pages – San Francisco, Bay Area, Alameda, CA. Inc.com. T-Mobile and AT&T went head-to-head on Twitter over a customer… T-Mobile won. 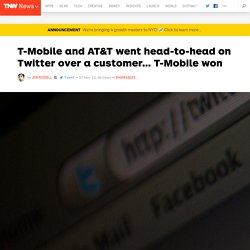 If you considered switching your mobile operator in the past, you might chat with friends or family about it and then come to a decision. These days you can do more than that — why not put out a tweet too… you might attract the attention of those very same operators, and even T-Mobile’s CEO himself. Marc Ecko Tags Air Force One. How We Grew Crazy Egg to 100,000 Users With A $10,000 Marketing Budget. Loyalty lessons from Lady Gaga. I asked for eggs — This Happened to Me. Red%20Bull%20Success%20story. Red Bull's Billionaire Maniac. (Corrects Sports Illustrated's paid circulation in fourth paragraph.) 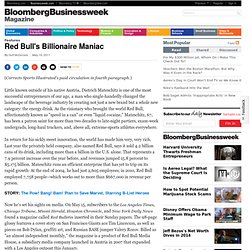 Little known outside of his native Austria, Dietrich Mateschitz is one of the most successful entrepreneurs of our age, a man who single-handedly changed the landscape of the beverage industry by creating not just a new brand but a whole new category: the energy drink. As the visionary who brought the world Red Bull, affectionately known as "speed in a can" or even "liquid cocaine," Mateschitz, 67, has been a patron saint for more than two decades to late-night partiers, exam-week undergrads, long-haul truckers, and, above all, extreme-sports athletes everywhere. Dashboard. Marketing Is Dead - Bill Lee. Traditional marketing — including advertising, public relations, branding and corporate communications — is dead. 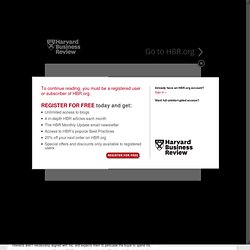 Many people in traditional marketing roles and organizations may not realize they’re operating within a dead paradigm. But they are. The evidence is clear. First, buyers are no longer paying much attention. Several studies have confirmed that in the “buyer’s decision journey,” traditional marketing communications just aren’t relevant. Early Pinterest Growth Was Driven By Grassroots Marketing - Liz Gannes.

Pinterest, which CEO Ben Silbermann describes as a tool that helps people find inspiration, is now the third-largest source of referral traffic on the Internet. 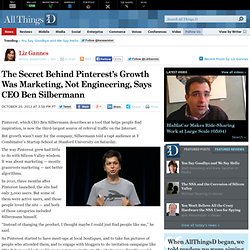 But growth wasn’t easy for the company, Silbermann told a rapt audience at Y Combinator’s Startup School at Stanford University on Saturday. The way Pinterest grew had little to do with Silicon Valley wisdom. It was about marketing — mostly grassroots marketing — not better algorithms. In 2010, three months after Pinterest launched, the site had only 3,000 users. But some of them were active users, and those people loved the site — and both of those categories included Silbermann himself. Salesforce Marketing Cloud Demo.