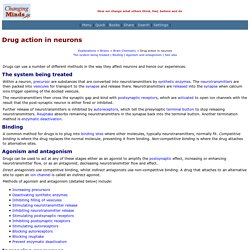 The Neuroplasticity Phenomenon of Kindling. Kindling; a model of focal epilepsy (last updated July 2006) A page from: Eric Hargreaves'Page O'Neuroplasticity As the name "Kindling" suggests, a small spark applied to tinder will ignite a flame that eventually can grow into a roaring bonfire. 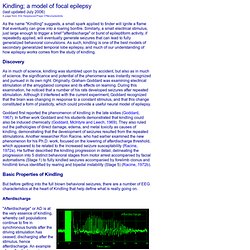 Similarly, a small electrical stimulus, just large enough to trigger a brief "afterdischarge" or burst of epileptiform activity, if repeatedly applied, will eventually generate seizures that can lead to fully generalized behavioral convulsions. Motor06a - motor1.pdf. Dr. Ronald Ricker and Dr. Venus Nicolino: The Over-Prescribing of Psychoactive Drugs to Children: A Scourge of Our Times. Tourette syndrome: Non-drug therapy to reduce tics; Study shows the neurophysiological impacts of psychotherapy. The use of cognitive-behavioural therapy to treat tics in Tourette syndrome may be as effective as and even superior to medication in certain cases. 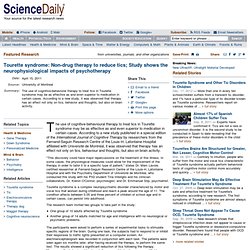 According to a new study published in a special edition of the International Journal of Cognitive Therapy by researchers from the Fernand-Seguin Research Centre of the Louis-H. Microsoft Word - Face to Face Newsletter - Winter 2014.docx - FacetoFaceNewsletter-Winter2014.pdf. Pituitary Tumor: FREQUENTLY ASKED QUESTIONS. 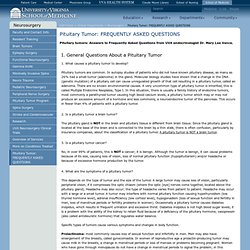 General Questions About a Pituitary Tumor. Current Investigations Supported by the Neuropsychology Research Lab. Center on the Developing Child at Harvard University. Home. Head CT. Understanding the basic biology of bipolar disorder. Scientists know there is a strong genetic component to bipolar disorder, but they have had an extremely difficult time identifying the genes that cause it. 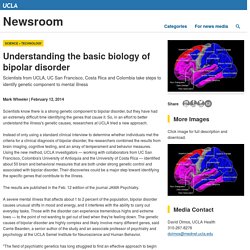 So, in an effort to better understand the illness's genetic causes, researchers at UCLA tried a new approach. Instead of only using a standard clinical interview to determine whether individuals met the criteria for a clinical diagnosis of bipolar disorder, the researchers combined the results from brain imaging, cognitive testing, and an array of temperament and behavior measures.

Using the new method, UCLA investigators — working with collaborators from UC San Francisco, Colombia's University of Antioquia and the University of Costa Rica — identified about 50 brain and behavioral measures that are both under strong genetic control and associated with bipolar disorder. Their discoveries could be a major step toward identifying the specific genes that contribute to the illness. 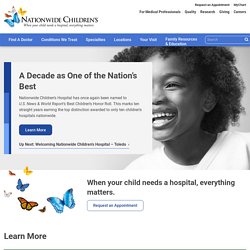 What is a multidisciplinary team? Depending on each child and adolescent’s needs, a multidisciplinary team may consist of the following: Psychiatrist Psychiatrists are licensed physicians (MD or DO) who specialize in the evaluation, diagnosis and pharmacology related to treating mental disorders. Their medical and psychiatric training prepares them to prescribe medication, participate in treatment planning and implementation. Children and adolescent psychiatrists are licensed physicians who specialize in the evaluation, diagnosis and pharmacological treatment of children and adolescents specifically. Nurse Practitioner Nurse Practitioners are registered nurses with advanced education and clinical expertise. And EEG Biofeedback Fact Sheet. Education Pages. Use of Mental Health Services and Barriers to Care for Individuals on Probation or Parole - Corrections & Mental Health - Corrections Community. 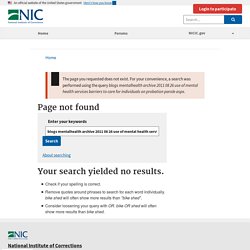 Owens, Shannon M. Rogers, and Allison A. Whitesell (2011). "Use of Mental health Services and Barriers to Care for Individuals on Probation or Parole. " Medical Neurosciences. Axons arising from neurons in motor V constitute the bulk of the motor root of the trigeminal and supply the muscles of mastication (masseter, temporalis and lateral and medial pterygoid muscles), as well as the tensor tympani, tensor veli palatini, anterior belly of digastric and the mylohyoid muscles. 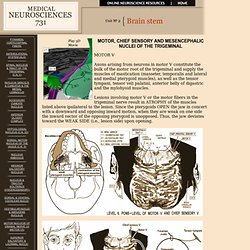 Lesions involving motor V or the motor fibers in the trigeminal nerve result in ATROPHY of the muscles listed above ipsilateral to the lesion. Since the pterygoids OPEN the jaw in concert with a downward and opposing inward motion, when they are weak on one side the inward vector of the opposing pterygoid is unopposed. Alexander Luria: life, research & contribution to neuroscience. General Surgery News - Omentum Surgery Explored For Alzheimer’s Disease. Humans Already Use Way, Way More Than 10 Percent of Their Brains - Sam McDougle. It’s a complex, constantly multi-tasking network of tissue—but the myth persists. 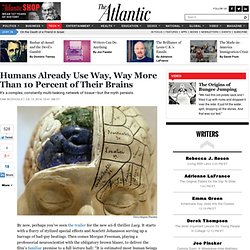 Chris Helgren/Reuters By now, perhaps you’ve seen the trailer for the new sci-fi thriller Lucy. It starts with a flurry of stylized special effects and Scarlett Johansson serving up a barrage of bad-guy beatings. Then comes Morgan Freeman, playing a professorial neuroscientist with the obligatory brown blazer, to deliver the film’s familiar premise to a full lecture hall: “It is estimated most human beings only use 10 percent of the brain’s capacity. Imagine if we could access 100 percent. Trainor_large.jpg (JPEG Image, 965 × 1234 pixels) - Scaled (81%) A comparative analysis of MRI and CT brain images for stroke diagnosis. The advances in medical imaging have led to new multi dimensional imaging modalities that have become important clinical tools in diagnostic radiology. 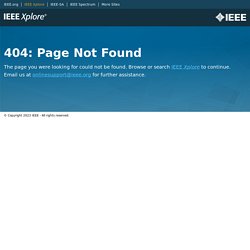 The two modalities capable of producing multidimensional images for radiological applications are Computed Tomography (CT) and Magnetic Resonance Imaging (MRI). Normally the first radiologic examination in suspicion of stroke is brain CT imaging. But MRI provides high resolution images with excellent soft tissue characterization capabilities. A comparative analysis for the diagnosis of stroke on CT and MRI images is presented in this paper.

ADHD medication may be overprescribed in the U.S. Nearly 5 million privately insured Americans used a medication to treat attention deficit hyperactivity disorder (ADHD) in 2012, a 35% increase from 2008, according to an analysis from Express Scripts released this month. ADHD diagnoses and drug treatment are at “questionable levels” in the U.S., the authors suggested, further noting that the disease may have become a “go-to diagnosis” that masks other problems, like mood or anxiety disorders. Spending on ADHD medications rose 14.2% in 2012, which the report says is the greatest increase seen among any traditional drug category. A Science Odyssey: People and Discoveries: Wilder Penfield. Wilder Penfield1891 - 1976 Wilder Penfield was born in Spokane, Washington, and spent much of his youth in Hudson, Wisconsin.

When he was 13, in 1904, his mother learned of the newly established Rhodes Scholarship. A Science Odyssey: People and Discoveries: Moniz develops lobotomy for mental illness.