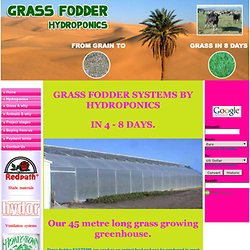 Grass fodder SYSTEMS are used as an animal feed and can be produced in great numbers within 8 days from seed to grass for all livestock. Various varieties of grass fodder include, but are not limited to, barley, oat grass, lucerne grass, to rye grass or whatever grass one wishes to grow in ones country. (add C02 and you can make quicker in 4-5 days). Growing grass fodder systems hydroponically is now becoming popular in drought prone areas but growing hydroponic grass fodder can require a large investment in a commercial hydroponic greenhouse. We can help the small hobby farmer in arid countries and specialize in large commercial grass fodder production. BUILDING YOUR HYDROPONIC FODDER GRASS SYSTEM GREENHOUSE: the home handyman way We will give you a little info on building your system -- this is not commercial as we are doing but a guide only. 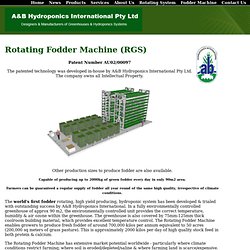 The company owns all Intellectual Property. Other production sizes to produce fodder are also available. Capable of producing up to 2000kg of green fodder every day in only 90m2 area. Farmers can be guaranteed a regular supply of fodder all year round of the same high quality, irrespective of climate conditions. The world's first fodder rotating, high yield producing, hydroponic system has been developed & trialed with outstanding success by A&B Hydroponics International. The Rotating Fodder Machine has extensive market potential worldwide - particularly where climate conditions restrict farming; where soil is eroded/depleted/saline & where farming land is scarce/expensive. 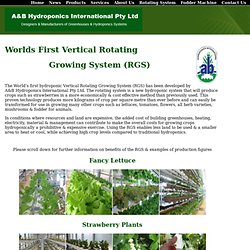 The rotating system is a new hydroponic system that will produce crops such as strawberries in a more economically & cost effective method than previously used. This proven technology produces more kilograms of crop per square metre than ever before and can easily be transformed for use in growing many other crops such as lettuces, tomatoes, flowers, all herb varieties, mushrooms & fodder for animals. In conditions where resources and land are expensive, the added cost of building greenhouses, heating, electricity, material & management can contribute to make the overall costs for growing crops hydroponically a prohibitive & expensive exercise.