This Email From Elon Musk to Tesla Employees Is a Master Class in Emotional Intelligence. Musk insists, however, that safety is the number one priority at Tesla. He claims that recent actions, like the company's hiring thousands of employees to create a third shift and reduce excess overtime, have made a major impact in lowering the injury rate. No words can express how much I care about your safety and wellbeing. It breaks my heart when someone is injured building cars and trying their best to make Tesla successful.Going forward, I've asked that every injury be reported directly to me, without exception. I'm meeting with the safety team every week and would like to meet every injured person as soon as they are well, so that I can understand from them exactly what we need to do to make it better. I will then go down to the production line and perform the same task that they perform. Washington University in St. Louis.

Book Review: On The Road. There’s a story about a TV guide that summarized The Wizard of Oz as “Transported to a surreal landscape, a young girl kills the first woman she meets, then teams up with three complete strangers to kill again.” 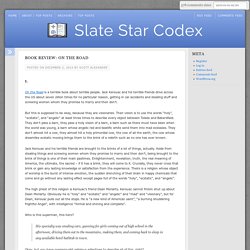 It’s funny because it mistakes a tale of wonder and adventure for a crime spree. Jack Kerouac’s On the Road is the opposite; a crime spree that gets mistaken for a tale of wonder and adventure. On The Road is a terrible book about terrible people. Kerouac and his terrible friends drive across the US about seven zillion times for no particular reason, getting in car accidents and stealing stuff and screwing women whom they promise to marry and then don’t.

But it’s okay, because they are visionaries. Jack Kerouac and his terrible friends are brought to the brinks of a lot of things, actually. The high priest of this religion is Kerouac’s friend Dean Moriarty. Who is this superman, this hero? Okay, but you have overwrought religious adjectives to describe all of this, right? Right. Dr. Karen’s Rules of the Academic CV. Today’s post is a long overdue post on CVs. 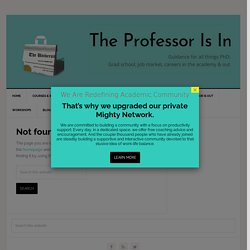 While the CV genre permits a wide range of variation, and there is no consensus on the value or desirability of one particular style, I am going to present a list of expectations that govern my own work at The Professor Is In. These expectations will produce a highly-readable, well-organized CV on the American academic model. British and Canadian CV-writers will note that the font is larger, the length is greater, the margins wider, and the white spaces more abundant than you may be used to.

These are the typical norms for American CVs (again, admitting of enormous variation among fields and individuals). These norms govern the “paper” CVs that are submitted as elements of a job application. These rules do not encompass online CVs, which may employ elements such as bullet points that I reject. Without further ado: Dr. I. One inch margins on all four sides. 12 point font throughout Single spaced Headings in bold and all caps. Subheadings in bold only. How to Write a Good Preface. A good preface can be your best advertising campaign. 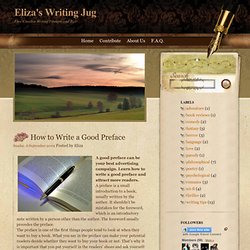 Learn how to write a good preface and attract more readers. A preface is a small introduction to a book, usually written by the author. It shouldn’t be mistaken for the foreword, which is an introductory note written by a person other than the author. The foreword usually precedes the preface. Top 20 Best PowerPoint Presentations.

Looking for the best PowerPoint presentations to inspire you? 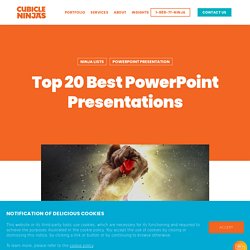 We searched high and low to provide you with an out of this world list of the best PowerPoint presentation designs. Presentations don’t only have to be used the day of your pitch. Now with sites like SlideShare, presentations are a great medium for creating unique content. From Slideshares to Ted Talks, here’s a top 20 list of the best PowerPoint presentation designs. …And feel free to laugh at the irony of us using bullet points while we applaud presenters for not using them! Top 20 Best PowerPoint Presentation Designs 1. Cover Letter Writing Guide: Academic Faculty Positions. Language Log. An important rallying cry and usage distinction made by allies of undocumented workers in the current cultural battle over immigration in the United States is Elie Wiesel's assertion above: "No human being is illegal. 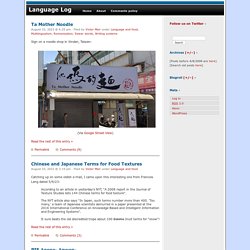 " In the quote, Wiesel gives examples of the kinds of adjectives that he feels can denote properties of people (fat, skinny, beautiful, right, and wrong). On the other hand, calling a person 'illegal', he says, is a contradiction in terms. Here's a more elaborated statement of the idea, quoted from this website When one refers to an immigrant as an "illegal alien," they are using the term as a noun. They are effectively saying that the individual, as opposed to any actions that the individual has taken, is illegal. How To Write a Letter of Intent: Template, Example. A letter of intent is typically written by a student who is trying to sell himself to an undergraduate college/university, a graduate school, an athletic department at a college/university, or a business that provides an internship. 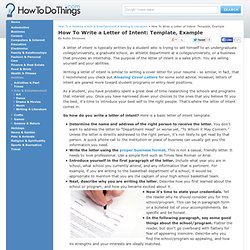 The purpose of the letter of intent is a sales pitch. You are selling yourself and your abilities. Writing a letter of intent is similar to writing a cover letter for your resume - so similar, in fact, that I recommend you check out Amazing Cover Letters for some solid advice. However, letters of intent are geared more toward student programs or entry-level positions.