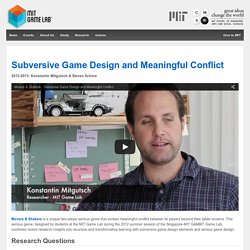 This serious game, designed by students at the MIT Game Lab during the 2012 summer session of the Singapore-MIT GAMBIT Game Lab, combines recent research insights into recursive and transformative learning with subversive game design elements and serious game design. Research Questions Movers & Shakers is used as a research tool to explore how a social component influences experiences in serious games. 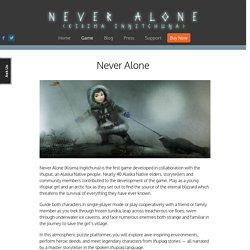 Nearly 40 Alaska Native elders, storytellers and community members contributed to the development of the game. Play as a young Iñupiat girl and an arctic fox as they set out to find the source of the eternal blizzard which threatens the survival of everything they have ever known. Guide both characters in single-player mode or play cooperatively with a friend or family member as you trek through frozen tundra, leap across treacherous ice floes, swim through underwater ice caverns, and face numerous enemies both strange and familiar in the journey to save the girl’s village. In this atmospheric puzzle platformer, you will explore awe-inspiring environments, perform heroic deeds, and meet legendary characters from Iñupiaq stories — all narrated by a master storyteller in the spoken Iñupiaq language.

What I Learned Playing The World's Most Tragic Video Game. I am a Pakistani child, running through a colorful vegetable patch on a bright summer day. 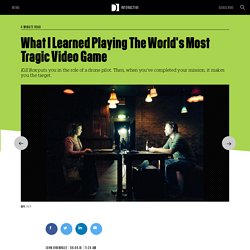 The sky above me is impossibly blue. Through the rows of leafy fronds, I can see the village elders walk to the mosque, chatting and gesturing with their sunburned hands. Then, from the sky, I hear a siren-like whistling. I stop, looking to the elders, only to see them sprinting down the road towards the mosque in a panic. Confused, I hold my hand up to shade my eyes against the sun, and look into the sky. My heart pounds in my chest as I—the real I, sitting behind my computer monitor—look at the silent black kill screen. And now I am a Pakistani child again, running through a vegetable patch. The game I am playing is Kill Box, an online game and interactive installation that explores the nature of drone warfare. Kill Box is neither meant to victimize those killed in drone attacks, nor demonize their operators.

Bound - E3 Trailer. App tackles teenage mental health via gaming. Another world: the ReachOut app is anchored in a grey world and players develop positive-thinking strategies to move to a better place. 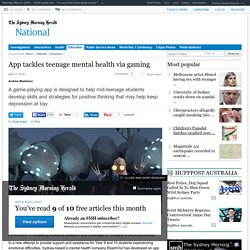 Photo: Supplied The mid-teenage years can be fraught for Australian students, involving a sometimes troubling combination of increasing academic pressure and challenges to concepts of personal identity. In a new attempt to provide support and assistance for Year 9 and 10 students experiencing emotional difficulties, Sydney-based e-mental health company ReachOut has developed an app that aims to combine the principles of positive psychology with the near-universal teenage interest in gaming. The app, called ReachOut Orb, takes players to an interactive world that was once colourful and happy but is now dull and grey. Sunday Loot: Indigenous Games & Game Devs You Should Know – FemHype. Happy Sunday, friends! 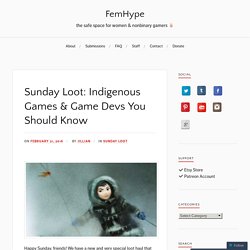 We have a new and very special loot haul that we’re super excited to share with you today. This particular list was brought to you by Melissa, a fellow FemHype writer, after a rousing discussion with Ishki regarding the importance of indigenous stories in games. Ishki is an independent game developer who was featured in a recent remeshed article, “7 More Women of Color Game Developers You Should Know.” Take a look there once you’re finished here, as it’s an absolutely necessary list that kicked off our efforts here. While you’re enjoying that mid-afternoon cup of tea, give “The post-apocalyptic dimensional space of Native video game design” a read as well.

“It’s not sci-fi to us. As always, if you know of an inclusive gaming space or games project you’d love to see promoted on our Sunday Loot series, drop us a comment below or check out our contact list! Refugees in Utrecht explore the city through selfie-treasure hunt. On Tuesday December 1, a group of refugees from the Utrecht refugee center played a selfie-treasure hunt to playfully explore the city. 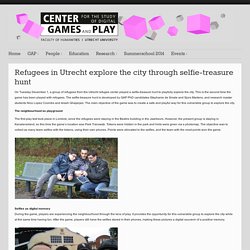 This is the second time the game has been played with refugees. The selfie-treasure hunt is developed by GAP PhD candidates Stephanie de Smale and Sjors Martens, and research master students Nico Lopez Coombs and Arash Ghajarjazi. Dartmouth College Researchers Say Newly Designed Game Will Reduce Social Bias And Spread Diversity. With the release of any violent video game, like Grand Theft Auto or Halo, you’ll see media coverage calling out all the negative aspects of the game as well as the impact it might have on the people who play them. 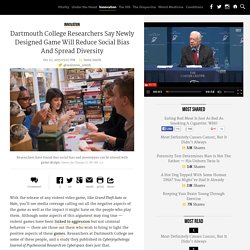 Although some aspects of this argument may ring true — violent games have been linked to aggression but not criminal behavior — there are those out there who wish to bring to light the positive aspects of these games. Researchers at Dartmouth College are some of these people, and a study they published in Cyberpsychology: Journal of Psychosocial Research on Cyberspace does just that. Evolution of Minecraft (Infographic) A Touch-Screen Game That Wants to Save the World.