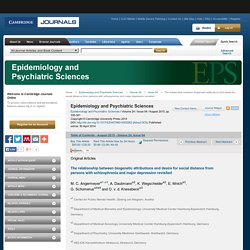 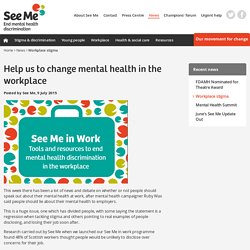 This is a huge issue, one which has divided people, with some saying the statement is a regression when tackling stigma and others pointing to real examples of people disclosing, and losing their job soon after. Research carried out by See Me when we launched our See Me in work programme found 48% of Scottish workers thought people would be unlikely to disclose over concerns for their job. We also found 55% thought that people would be unlikely to disclose a mental illness as it could result in being passed over for promotion or moved to another post. Since we launched the programme over 100 organisations have signed up to receive our updates and 13 organisations have moved to the engagement stage of the process.

Chris O'Sullivan on Twitter: ".@SimonSRN agree. And by awareness we include knowledge of them and enough agency to be able to use them." Mind Science sur Twitter : "Wonderful #infographic on #mentalhealth #mentalillness #depression #bipolar #stigma #timetochange... Clare Allan sur Twitter : "What is personality disorder? A truly disgraceful piece of #mh #stigma spreading from @BBCNews. Witter / ? SeeMe14 Reflections, Who are we to Judge. Mentalcapital : Love the google doodle today. Bedlam, Stigma, and Twitter as an Indicator. Over the past three weeks I’ve been watching Channel 4’s ground-breaking new documentary series Bedlam. 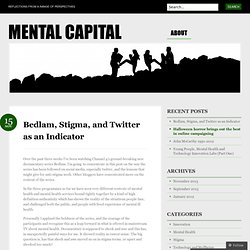 I’m going to concentrate in this post on the way the series has been followed on social media, especially twitter, and the lessons that might give for anti-stigma work. Other bloggers have concentrated more on the content of the series. In the three programmes so far we have seen very different contexts of mental health and mental health services bound tightly together by a kind of high definition authenticity which has shown the reality of the situations people face, and challenged both the public, and people with lived experience of mental ill health.

Personally I applaud the boldness of the series, and the courage of the participants and recognise this as a leap forward in what is offered in mainstream TV about mental health. Documentary is supposed to shock and awe and this has, in unexpectedly painful ways for me. The hardest thing to say out-loud. It’s not very often I’m asked to talk about having Type 1 Diabetes – I’m usually in some nursing or informatics forum or talking about social media – but a few weeks ago I was delighted to be able to go to talk to a group of MSc nursing students in Nottingham. 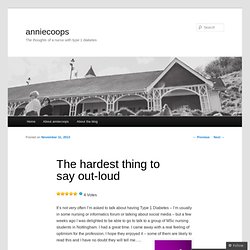 I had a great time. I came away with a real feeling of optimism for the profession. I hope they enjoyed it – some of them are likely to read this and I have no doubt they will tell m e….. While I was telling my story something strange happened, something cathartic and afterwards I realised I had never said some of the things I said to this group out loud, in fact when I said them I could almost feel the group do a sharp intake of breath, a moving back, a sitting up straighter; I don’t know, something shifted, moved as if they started to really listen. In 1989 we moved house. Home – I didn’t let it happen the second time we moved to this house. The gap in life expectancy from preventable physical illness in psychiatric patients in Western Australia: retrospective analysis of population based registers. David Lawrence, research professor1, Kirsten J Hancock, senior analyst1, Stephen Kisely, professor23 Author Affiliations Correspondence to: D Lawrence dlawrence@ichr.uwa.edu.auAccepted 15 April 2013 Abstract Objective To examine the mortality experience of psychiatric patients in Western Australia compared with the general population. 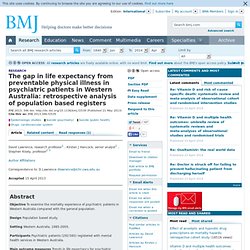 Design Population based study. Setting Western Australia, 1985-2005. Breaking the mental health taboo. By Harry PhibbsUPDATED: 14:20 GMT, 3 November 2011 St Clements Hospital in Mile End, in the east end of London, is a Victorian building which was a mental health hospital until it closed in 2005. 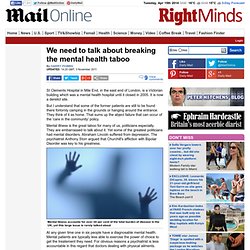 It is now a derelict site. But I understand that some of the former patients are still to be found there forlornly camping in the grounds or hanging around the entrance. They think of it as home. That sums up the abject failure that can occur of the 'care in the community' policy. Mental illness is the great taboo for many of us, politicians especially.