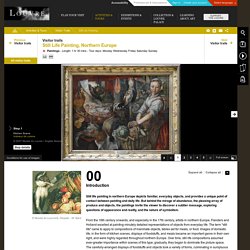 But behind the mirage of abundance, the pleasing array of produce and objects, the paintings invite the viewer to discover a subtler message, exploring questions of appearance and reality, and the nature of symbolism. From the 16th century onwards, and especially in the 17th century, artists in northern Europe, Flanders and Holland excelled at painting minutely detailed representations of objects from everyday life.

The term "still life" came to apply to compositions of inanimate objects, tables set for meals, or food. Images of domestic life, in the form of kitchen scenes, displays of foodstuffs, and meals became an important genre in their own right, and were highly regarded throughout northern Europe. How to get to the next stop: Food and Drink in European Painting, 1400–1800. Miniature world food art - in pictures. The Four Elements: Earth. This is one of a set of four pictures which take as their theme the four elements of 'Earth', 'Water', 'Air' and 'Fire'. 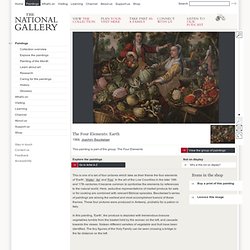 In the art of the Low Countries in the later 16th and 17th centuries it became common to symbolise the elements by references to the natural world. Here, seductive representations of market produce for sale or for cooking are combined with relevant Biblical episodes. Beuckelaer's series of paintings are among the earliest and most accomplished fusions of these themes. These four pictures were produced in Antwerp, probably for a patron in Italy. In this painting, 'Earth', the produce is depicted with tremendous bravura: vegetables tumble from the basket held by the woman on the left, and cascade towards the viewer. Art and Appetite: American Painting, Culture, and Cuisine. Andreas Gursky. Lisa Milroy. 'Pictures from a Rubbish Tip', Keith Arnatt.

Food Inspired by Modern Works of Art at SFMOMA. Pierre Bonnard: Before Dinner (1975.1.156) Still-Life Painting in Northern Europe, 1600–1800. Episodetwentynine. The Greatest Food Still Lifes in Art History. Food for Thought Collection. Eating Art. Food as art: it looks almost too good to eat. A few years ago, I wrote a cookery book called Cherry Cake And Ginger Beer that was inspired by the delicious food and treats enjoyed by the characters in children's classics. 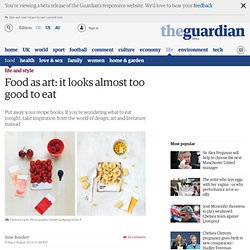 There were recipes for Mary Poppins' Raspberry Jam Cakes, Swallows and Amazons' Seed Cake, and Anne of Green Gables' Layer Cake. The idea emerged on a family holiday during a conversation with my then nine-year-old daughter, who at that point was engrossed in a marathon reading of Enid Blyton's Five Find-Outer series, which contains multiple references to macaroons and fry-ups. As I was also something of a greedy reader when young, together we decided to ransack the library to create a collection of recipes that could be made with and by children who wondered how the foodstuffs that are so avidly consumed on the page actually taste off the page. As it now turns out, the book was an early example of a new phenomenon that sees adventurous cooks finding inspiration everywhere but in a recipe book.

Synthetic meat: is it 'natural' food? The 'Google burger' … it looks like beef, tastes like beef … Photograph: AFP Monday's big food news was the great reveal and taste test of a burger made of lab-raised cultured beef. 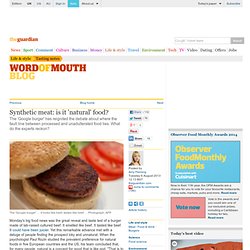 It smelled like beef. It tasted like beef. It could have been juicier. Yet this remarkable advance met with a deluge of people finding the prospect icky and unnatural. This penchant for purity is a mammoth economic factor. Define "natural" It's tricky. The reasoning behind our preference for unadulterated food is quite patchy. Organic is a more specific and regulated term. Is natural healthier? The treat section is a big appeal of health-food stores. There's natural, and then there's disgusting Spence puckishly suggests that the power of natural-style labelling could be harnessed to encourage westerners to eat critters for our economic and environmental good. Unnatural haute cuisine The notion of molecular gastronomy rather turned the distaste for "unnatural" on its head. I'm not sure if that was achieved. BBC Food - Eating using all your senses.

4 December 2012Last updated at 10:19 By Anna-Louise Taylor BBC Food Eating textural foods such as pomegranate is one way to reawaken the senses We rely too much on one or two senses like taste and sight when picking and eating food, researchers say. 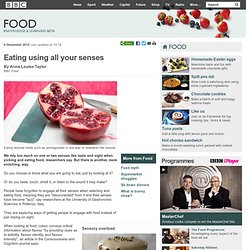 But there is another, more enriching, way. Do you choose or know what you are going to eat, just by looking at it? Or do you taste, touch, smell it, or listen to the sound it may make? People have forgotten to engage all their senses when selecting and eating food, meaning they are "disconnected" from it and their senses have become "lazy", say researchers at the University of Gastronomic Sciences in Pollenzo, Italy. They are exploring ways of getting people to engage with food instead of just relying on sight. When looking at food, colour conveys critical information about flavour "by providing clues as to edibility, flavour identity, and flavour intensity", an article in the Consciousness and Cognition journal says. What The World Eats - Shocking Photos. This photographic report exposes the proliferation of processed foods in the Western diet and in the diets of many developing countries the world over. 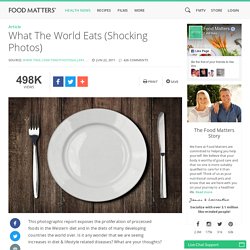 Is it any wonder that we are seeing increases in diet & lifestyle related diseases? What are your thoughts? The project These images are from the book 'Hungry Planet: What the World Eats' by Peter Menzel and Faith D'Aluision. It's an inspired idea: to better understand the human diet, explore what culturally diverse families eat for a week. Mexico Britain North Carolina, USA Australia Germany California, USA Italy Canada France Japan. Feasting on Art.