How Recycled Plastic Bottles Are Building Homes. What's the difference between the IMF and the World Bank? Ford Model T - 100 Years Later. Elon Musk unveils Solar Roof by SolarCity. Hans Rosling: The magic washing machine. Recycling in america Vs Recycling in Norway. Video Making Electricity From Slow Moving Water. DB Export Sand Maker. Mashable. How to Make Petrol or Gas from Crude Oil. YouTube. This company is building houses from old plastic. Japan dome house. India is building millions of toilets, but that’s the easy part. MUKHRAI, India — Rameshwar Natholi received an unexpected gift from the government recently when workmen descended on his modest home in this rural village in the northern Indian state of Uttar Pradesh and built a brand-new toilet in his front yard. 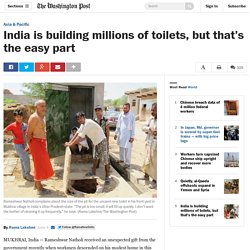 Natholi, a farmworker, said he never wanted one. Most people in his village have been relieving themselves in the open fields for years. But as part of Prime Minister Narendra Modi’s “Clean India” campaign to provide new sanitary toilets to more than 60 million homes by 2019, Mukhrai has been in the midst of a toilet-building boom since April. More than 53 percent of Indian homes — about 70 percent in the villages — lack toilets.

Poor sanitation and contaminated water cause 80 percent of the diseases afflicting rural India, and diarrhea is a leading killer of children younger than 5, UNICEF says. Modi says that this is a shame for a country that has global aspirations and that the lack of sanitary conveniences is demeaning to women. São Paulo Water Crisis Linked to Growth, Pollution and Deforestation. SÃO PAULO, Brazil — Endowed with the Amazon and other mighty rivers, an array of huge dams and one-eighth of the world’s fresh water, Brazil is sometimes called the “Saudi Arabia of water,” so rich in the coveted resource that some liken it to living above a sea of oil. 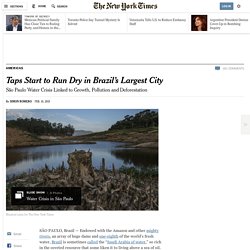 But in ’s largest and wealthiest city, a more dystopian situation is unfolding: The taps are starting to run dry. As southeast Brazil grapples with its worst drought in nearly a century, a problem worsened by polluted rivers, deforestation and population growth, the largest reservoir system serving São Paulo is near depletion. Many residents are already enduring sporadic water cutoffs, some going days without it. Officials say that drastic rationing may be needed, with water service provided only two days a week. Behind closed doors, the views are grimmer. Some residents have begun drilling their own wells around homes and apartment buildings, or hoarding water in buckets to wash clothes or flush toilets. אחסון בחינם ואימייל מאת Google. Is HDI the best index for measuring Development? 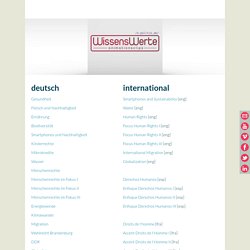 10 Most Incredible Earth Scars. Walled world: How walls are springing up to divide populations everywhere. YouTube. Map: U.S. state GDP compared to other countries. Map: What Country Does Your State's Life Expectancy Resemble? - Olga Khazan. American life expectancy has leapt up some 30 years in the past century, and we now live roughly 79.8 years on average. 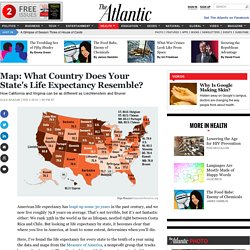 That’s not terrible, but it’s not fantastic either: We rank 35th in the world as far as lifespan, nestled right between Costa Rica and Chile. But looking at life expectancy by state, it becomes clear that where you live in America, at least to some extent, determines when you’ll die. Here, I’ve found the life expectancy for every state to the tenth of a year using the data and maps from the Measure of America, a nonprofit group that tracks human development. Then, I paired it up with the nearest country by life expectancy from the World Health Organization’s 2013 data. When there was no country with that state’s exact life expectancy, I paired it with the nearest matching country, which was always within two-tenths of a year.

There’s profound variation by state, from a low of 75 years in Mississippi to a high of 81.3 in Hawaii.