Digital History. Printable Version Most of the history that we acquire comes not from history textbooks or classroom lectures but from images that we receive from movies, television, childhood stories, and folklore. 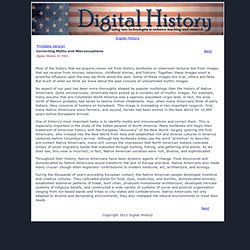 Together, these images exert a powerful influence upon the way we think about the past. Some of these images are true; others are false. But much of what we think we know about the past consists of unexamined mythic images. No aspect of our past has been more thoroughly shaped by popular mythology than the history of Native Americans. Quite unconsciously, Americans have picked up a complex set of mythic images.

One of history's most important tasks is to identify myths and misconceptions and correct them. Throughout their history, Native Americans have been dynamic agents of change. Digital History. Printable Version The four hundredth anniversary of Christopher Columbus's "discovery" of the New World was commemorated with a massive "Columbian Exhibition" in Chicago in 1893. 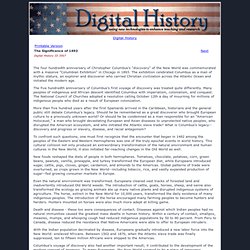 The exhibition celebrated Columbus as a man of mythic stature, an explorer and discoverer who carried Christian civilization across the Atlantic Ocean and initiated the modern age. The five hundredth anniversary of Columbus's first voyage of discovery was treated quite differently. Many peoples of indigenous and African descent identified Columbus with imperialism, colonialism, and conquest. The National Council of Churches adopted a resolution calling October 12th a day of mourning for millions of indigenous people who died as a result of European colonization.

More than five hundred years after the first Spaniards arrived in the Caribbean, historians and the general public still debate Columbus's legacy. New foods reshaped the diets of people in both hemispheres. Even the natural environment was transformed. The World Transformed. Summary of Native American Religions. A Summary of Native American Religions by David Ruvolo The history of American religions is dominated by the presence of Christianity brought to the New World by European settlers. 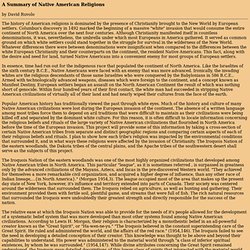 Columbus's discovery in 1492 marked the beginning of a massive "white" invasion that would consume the entire continent of North America over the next four centuries. Although Christianity manifested itself in countless denominations, it was, nevertheless, the umbrella under which most Europeans in America gathered. It served as common ground on which white settlers could stand together in the struggle for survival in the wilderness of the New World. In essence, time had run out for the indigenous race that populated the continent of North America. Popular American history has traditionally viewed the past through white eyes. The Iroquois Nation of the eastern woodlands was one of the most highly organized civilizations that developed among Native American tribes in North America.

According to Raymond J. Christopher Columbus Biography. “I went to sea from the most tender age and have continued in a sea life to this day. 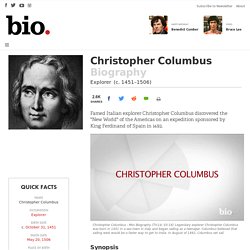 Whoever gives himself up to this art wants to know the secrets of Nature here below. It is more than forty years that I have been thus engaged. Wherever any one has sailed, there I have sailed.” “Speaking of myself, little profit had I won from twenty years of service, during which I have served with so great labors and perils, for today I have no roof over my head in Castile; if I wish to sleep or eat, I have no place to which to go, save an inn or tavern, and most often I lack the wherewithal to pay the score.”

“They say that there is in that land an infinite amount of gold, and that the people wear corals on their heads and very large bracelets of coral on their feet and arms; and that with coral they adorn and inlay chairs and chests and tables.” “This island and all the others are very fertile to a limitless degree, and this island is extremely so. The Columbian Exchange. The Columbian Exchange refers to a period of cultural and biological exchanges between the New and Old Worlds. 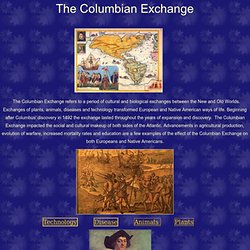 Exchanges of plants, animals, diseases and technology transformed European and Native American ways of life. Beginning after Columbus' discovery in 1492 the exchange lasted throughout the years of expansion and discovery. The Columbian Exchange impacted the social and cultural makeup of both sides of the Atlantic. Advancements in agricultural production, evolution of warfare, increased mortality rates and education are a few examples of the effect of the Columbian Exchange on both Europeans and Native Americans.