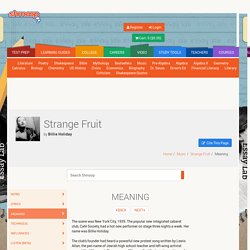 The popular new integrated cabaret club, Café Society, had a hot new performer on stage three nights a week. Her name was Billie Holiday. The club's founder had heard a powerful new protest song written by Lewis Allan, the pen name of Jewish high school teacher and left-wing activist named Abel Meeropol. The song was "Strange Fruit," a haunting critique of lynching and race terrorism in the American South. With some hesitation, perhaps because of the gravity of the song's content, Billie agreed to close her set with it. In her autobiography, Holiday later recalled the audience's stunned reaction: "There wasn't even a patter of applause when I finished. Though no one at the time knew it, when Billie Holiday first sang "Strange Fruit" at Café Society, she was singing America into the beginning of the Civil Rights Era.

The key players of this story were all drastically affected by racism in America. Then there was Abel Meeropol. Theme and Variations - Music in Politics and Revolution. Music and politics seem a natural pair: most political events are accompanied by great bombast and fanfare, and have been for centuries. 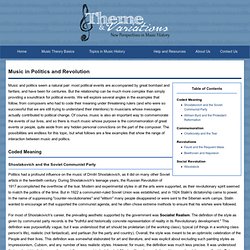 But the relationship can be much more complex than simply providing a soundtrack for political events. We will explore several angles in the examples that follow, from composers who had to code their meaning under threatening rulers (and who were so successful that we are still trying to understand their intentions) to musicians whose messages actually contributed to political change. Of course, music is also an important way to commemorate the events of our lives, and so there is much music whose purpose is the commemoration of great events or people, quite aside from any hidden personal convictions on the part of the composer.

The possibilities are endless for this topic, but what follows are a few examples that show the range of interaction between music and politics. David Byrne sings "(Nothing But) Flowers" Queen - 'Bohemian Rhapsody'. Overview - Music and U.S. Reform History: Stand Up and Sing - Lesson Plan. Back to Lesson Plans Lesson Overview Throughout American history, popular music has reflected the mood and opinions of the times. 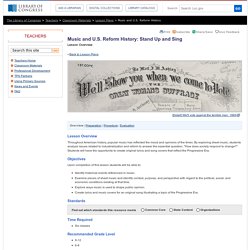 By exploring sheet music, students analyze issues related to industrialization and reform to answer the essential question, "How does society respond to change? " Students will have the opportunity to create original lyrics and song covers that reflect the Progressive Era. Objectives Upon completion of this lesson students will be able to: Identify historical events referenced in music. Standards Time Required Six classes Recommended Grade Level Topics Arts & Culture City & Regional History. 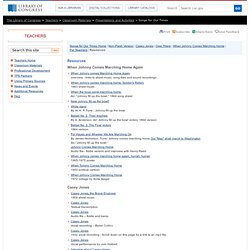 The Song Meaning Project. The Project: The Song Painting is the culminating project in the Web Publishing Fireworks Unit, where the student puts all that they have learned about Fireworks and graphic art into a final project that shows their very best work. 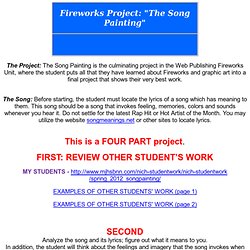 The Song: Before starting, the student must locate the lyrics of a song which has meaning to them. This song should be a song that invokes feeling, memories, colors and sounds whenever you hear it. Do not settle for the latest Rap Hit or Hot Artist of the Month. You may utilize the website songmeanings.net or other sites to locate lyrics. This is a FOUR PART project. MY STUDENTS - EXAMPLES OF OTHER STUDENTS' WORK (page 1) EXAMPLES OF OTHER STUDENTS' WORK (page 2) SECOND Analyze the song and its lyrics; figure out what it means to you. Complete the song meaning worksheet. This is an online form that asks a number of questions about your song.

Song Analysis: Sleep Through the Static - Jack Johnson Music Project. With this song, Jack uses irony and sarcasm to highlight the faults of American society and how media smooths out all the wrinkles of truth to tell a crooked report of events to the public. 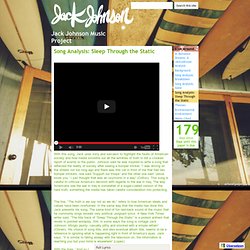 Johnson said he was inspired to write a song that reflected the reality of society after seeing a bumper sticker, “I was driving on the streets not too long ago and there was this car in front of me that had two bumper stickers, one said “Support our troops” and the other one said “Jesus loves you.” I just thought that was an oxymoron in a way” (Cotton). This song is careful to criticize America’s decision with regards to the war in Iraq. The way Americans see the war in Iraq is somewhat of a sugar-coated version of the hard truth, something the media has taken careful consideration into protecting.

The line, “The truth is we say not as we do,” refers to how American ideals and values have been overturned. Full Lyrics Who needs sleep when we've got love? But who needs to see what we've done? Rage Against the Machine.