A Day of Simple Living. The early morning was gray and overcast, but late morning brought sunshine and a sky with a shade of blue you only see the day after a rain. 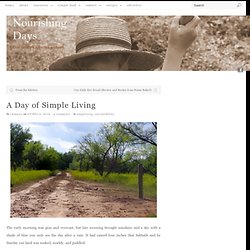 It had rained four inches that Sabbath and by Sunday our land was soaked, muddy, and puddled. The ground was perfect for planting. Spring Gardening: Tomatoes, Celery and 8 Other Foods You Can Regrow From Scraps. Update: Our Sweet Potatoes & More. Some of you have been asking for updates on our houseplant projects — today we’re bringing you a progress report on our sweet potatoes! 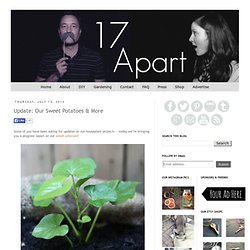 Last we checked in, they were hanging out all happy in their coffee sack bag planters, but not really showing any major growth (pictured above). After letting them sit and do their thing for about a month, the vines have really begun to take off: We’re at the point now where we’re considering filling more dirt into the bag to cover the lower portion of the vine and just roll the sides of the bags up as we add dirt.

We haven’t been squeezing or poking the bottom of the bag to feel if any potatoes have begun to form — though we will admit it’s been tempting. We’re just patiently waiting and watching, in hopes it will flower in late August and produce something in the early fall. Eat Wild. Encourage Prosperity, Alleviate Famine and Heal the Environment with Hemp. By Carolanne Wright Guest Writer for Wake Up World Hemp. 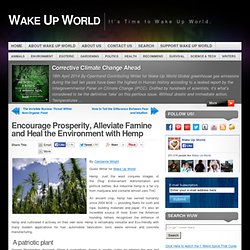 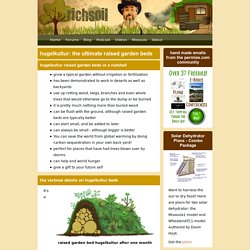 I'm an american doofus, so I say "hoogle culture". I learned this high-falootin word at my permaculture training. Hugelkultur is nothing more than making raised garden beds filled with rotten wood. Vertical Gardening Tips - Organic Gardening. A few years back I was leading an old friend through my garden, all the while bemoaning my lack of growing space, when he suddenly interrupted me and asked, "Why do people build skyscrapers? 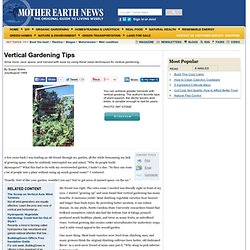 " What this had to do with my overcrowded garden, I hadn't a clue. "So they can cram a lot of people into a place without using up much ground room? " I ventured. "Exactly. Sort of like your garden, wouldn't you say? My friend was right. One more thing: Most bush varieties were bred from climbing ones, and many growers think the original climbing cultivars have better, old-fashioned flavor. 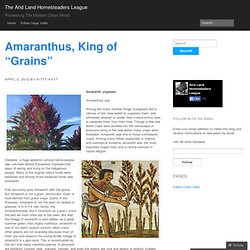 Among the many horrible things Europeans did to natives of the “new world” to suppress them, and ultimately attempt to render their culture extinct was to separate them from their food. Though a few new world crops were allowed into the cornucopia of everyone living in the new world, many crops were forbidden. Amaranth was one of those contraband crops. Among many tribes, especially in tropical and subtropical America, amaranth was the most important staple food, and a central element in native religion. Diabetes, a huge epidemic among native people, was unknown before Europeans imposed their ways of eating and living on the indigenous people. Folk taxonomy puts Amaranth with the grains. Amaranth seeds looks similar to quinoa, a distant relative, but much smaller.

There are many species of amaranth, and all are probably edible, though some lend themselves better to seed production, while others are better suited for greens. Golden Giant Amaranth. Organic Farms in Southwestern Ontario. 16 Foods That’ll Re-Grow from Kitchen Scraps. By Andy Whiteley Co- Founder of Wake Up World Looking for a healthy way to get more from your garden? 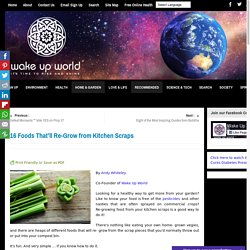 Like to know your food is free of the pesticides and other nasties that are often sprayed on commercial crops? Re-growing food from your kitchen scraps is a good way to do it! There’s nothing like eating your own home- grown vegies, and there are heaps of different foods that will re- grow from the scrap pieces that you’d normally throw out or put into your compost bin. It’s fun. Just remember … the quality of the “parent” vegetable scrap will help to determine the quality of the re-growth.

Leeks, Scallions, Spring Onions and Fennel You can either use the white root end of a vegetable that you have already cut, or buy a handful of new vegetables to use specifically for growing. Spring Gardening: Tomatoes, Celery and 8 Other Foods You Can Regrow From Scraps. 17 Apart: How to Grow Green Onions Indefinitely. I'm officially dubbing this the week of Scallions and Pinterest. 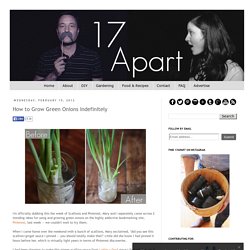 Mary and I separately came across 2 trending ideas for using and growing green onions on the highly addictive bookmarking site, Pinterest, last week — we couldn't wait to try them. When I came home over the weekend with a bunch of scallions, Mary exclaimed, "did you see this scallion/ginger sauce I pinned — you should totally make that! " Little did she know I had pinned it hours before her, which is virtually light years in terms of Pinterest discoveries.

I had been planning to make this ginger scallion sauce from Lottie + Doof since I first set eyes on it. Find my own variation on the recipe newly published on E.A.T. — this is one I'd definitely recommend trying.