The Duchess and all the Royalty

Prince Harry Fired From Startup After Old Photos Emerge Of Him Wearing Nazi Costume. Buckingham Palace Confirms Prince Phillip Released From Morgue In Good Health This Morning. Sighing Janitor Once Again Called In To Mop Up Puddle Of Megan Thee Stallion Pussy Juice. LOS ANGELES—Shaking his head as he rolled his bucket on stage and set up yellow “wet floor” signs, Grammy’s janitor Marko Pavlović let out a pained sigh Sunday after once again being called in to mop up a puddle of Megan Thee Stallion’s pussy juice. 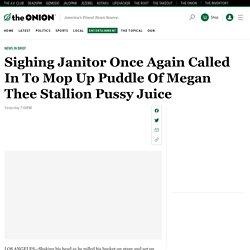 “Oh my god, not again—it’s like the second I’m finished cleaning up one of her messes, she goes backstage, loads up, and leaves lady froth all over the damn place,” said Pavlović, wringing out his fully saturated mop, covering the dance floor in a layer of saw dust, and spraying copious amounts anti-odor spray into the air as the song “Body” played in the background.

“I...don’t understand. This is the fourth time it’s happened, and that’s not even counting the rehearsal, where I was ankle deep in her clam sauce. At the very least, don’t do it on the stage right before BTS is supposed to go on. Someone could slip and break their neck.” Meghan Markle Reveals Royals Worried Her Son Wouldn’t Have Family’s Sickly, Rancid Skin. MONTECITO, CA—Revealing concerns within the British monarchy that a child in line to the throne might inherit a noticeably healthy glow, Meghan Markle said in a prime-time TV special Sunday that some of the royals had worried her son would be born without the family’s sickly, rancid skin. 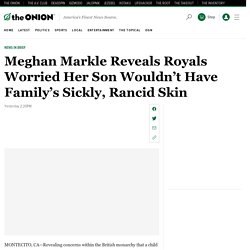 “When I was pregnant with Archie, Harry was approached by a member of his family who expressed apprehension that our baby might not have the disgustingly translucent and putrid complexions they are known for,” the Duchess of Sussex told interviewer Oprah Winfrey, explaining that the unease stemmed from the fact that her son would be the first Windsor in history not to be so pallid and heinous that even stepping foot in the sun would cause his fragile skin to blister and boil.

British Royal Family Condemns Media’s Ugly Attacks On Their Traditional Practice Of Sexual Abuse. Queen Elizabeth Watches As Oxen Pull Apart Farmer Who Failed To Provide Yearly Tithe Of Grain. LONDON—Demonstrating in no uncertain terms that any peasant who sought to shirk his or her duty would be summarily dealt with, Queen Elizabeth looked on dispassionately Friday as a team of four oxen, yoked in pairs, were strapped to the outstretched limbs of a farmer who had failed to provide the Crown with his yearly tithe of grain, and gazed, unblinking, as the great beasts were lashed with bullwhips until the laggard had been drawn, screaming, limb from limb. 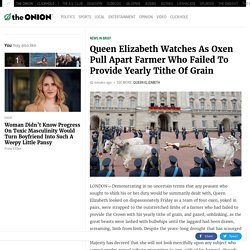 Despite the years-long drought that has scourged the countryside and left its once-fruitful fields bereft of greenery, Her Majesty has decreed that she will not look mercifully upon any subject who cannot render annual tribute amounting to one-10th of his harvest, though their starveling children cry themselves to sleep and the ribs of their horses cast sawtoothed shadows on the withered heath. Harry and Meghan Try 'Welly Wanging' on Tour in New Zealand. Theonion. Theonion. Theonion. Theonion. Theonion. Theonion. Why Prince William and Duchess Catherine Don’t Hold Hands in Public. 14 Innocent Things Kate Middleton Did That The Queen Probably Hates. Kate Middleton Eye Roll - New York Visit. Being a royal seems like a pretty cushy gig — but in reality, it's a lot of work. 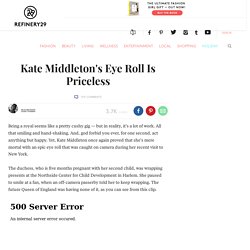 All that smiling and hand-shaking. And, god forbid you ever, for one second, act anything but happy. Kate Middleton gives eye-roll to woman telling her to 'keep wrapping' Kate and William’s home to have indoor hunting. Kate Middleton ‘Related To Monkeys’ Kate is spending the summer at a friend's villa in Sumatra According to scientists the early Middletons survived on nuts and berries, using their strong prehensile tails to swing from tree to tree. 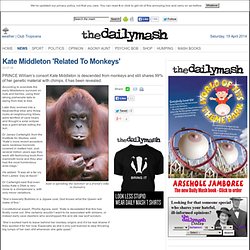 Later they evolved into a Neanderthal tribe who threw rocks at neighbouring tribes, were terrified of cave bears and thought a solar eclipse was a giant whale eating the sun. Dr James Cartwright, from the Insititute for Studies, said: “Kate’s more recent ancestors were neckless hominids covered in matted hair. Just several million years ago they were still fashioning tools from mammoth bone and they also had the most horrendous arse-clags.” Kate Middleton targeted by evil clown from It. Kids' Sports & Activities Group. I love that this is "news. 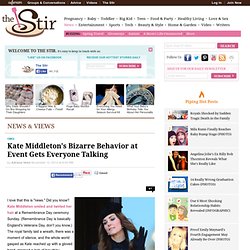 " Did you know? Kate Middleton smiled and twirled her hair at a Remembrance Day ceremony Sunday. (Remembrance Day is basically England's Veterans Day, don't you know.) The royal family laid a wreath, there was a moment of silence, and the whole world gasped as Kate reached up with a gloved hand, grasped a lock of her shiny, be-curled hair, and worked its perfect spiral through her fingers.

Primping, at such a solemn occasion! Royal Baby Spits Up On Great-Grandmother. Kate Middleton & Royal Baby's First Portrait Is Just Plain Creepy (PHOTO) The royal baby and mama Kate Middleton have already been immortalized on canvas! 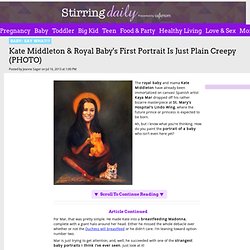 Royal Baby Already Crawling. Royal Baby Eats First Meal. Royal Baby Speaks First Words. Royal Baby Has Father’s Eyes. Royal Baby Born. Kate Middleton's Hospital Meals Sound Tastier Than Our Regular Meals. As countdown to the royal baby continues, the press is getting restless, the photographers are going stir-crazy and we royal watchers are grasping at any details we can get. 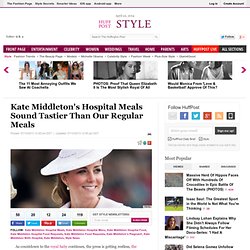 So here's the latest news on the royal birth horizon: Kate Middleton's supposed hospital menu is kind of extravagant. Surprising, we know. E! Reports that in The Lindo Wing at St Mary Hospital, where Kate is set to give birth, meals are three courses each and include options like "cream of tomato soup before moving on to an entrée of lamb chops or Mediterranean grilled chicken with a choice side dishes. " Desserts include cakes, fruit and cheeses (although we wonder if Kate will send Will to the closest vending machine to fetch her some candy). The best part? We would expect nothing less for the mother of the future king or queen. That would certainly rile the photographers who've been waiting by the hospital for days. Cut This Monster Out Of Me. By now the news has no doubt spread that early this morning I was admitted to the hospital due to severe morning sickness, a side effect accompanying my first pregnancy. 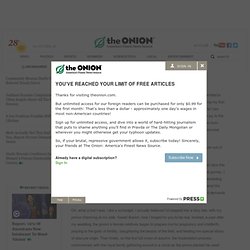 Yes, it’s true: After a year and a half of marriage, William and I are expecting a child, a greatly anticipated occasion that has brought much joy to the Crown and personal horror to me, the innocent woman who was chosen from among millions to act, unwittingly, as nothing more than vessel for a deformed and unnatural being. For the love of God, for the love of all that is holy, cut this fucking monster out of me! I don’t care how it’s done. Use scissors. Kate Middleton Feels Royal Baby Kicking During Queen’s Coronation Anniversary. Kate Middleton Suffering From Morning Sickness. Prince William Divorces Kate Middleton After 5 Weeks. Kate Middleton Shows Off Baby Bump. Kate Middleton Topless Photos Published. Royal Family Releases Kate Middleton Ultrasound Image. Covering The Royal Wedding.