(VIDEOS) News Regarding Members of the Imperial Family of Japan. On Tuesday, December 8, 2015, Their Imperial Majesties Emperor Akihito and Empress Michiko of Japan visited the OX Engineering factory in Chiba, Japan. 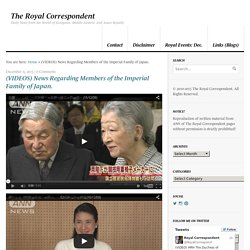 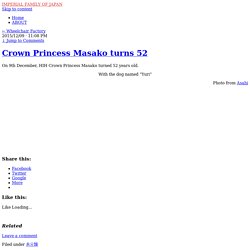 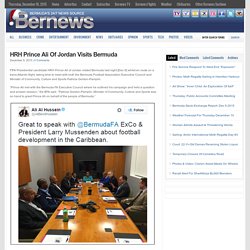 “Prince Ali met with the Bermuda FA Executive Council where he outlined his campaign and held a question and answer session,” the BFA said. Μετάφραση Google. Princess Mako visits El Salvador and Honduras. Prss Eugenie clutches her coat as gusts of wind send her hair flying during evening stroll. Here's Diana wearing the Cambridge Lover's Knot tiara for the first time at the state opening of parliament in 1981. Royal Ladies at International Red Cross Conference. Luxarazzi : Royal Ladies at International Red Cross Conference. In their capacities as presidents of their nations' respective Red Cross organisations, Grand Duchess Maria Teresa and Hereditary Princess Sophie were among the attendants of the first day of the 32nd International Conference of the Red Cross and Red Crescent. 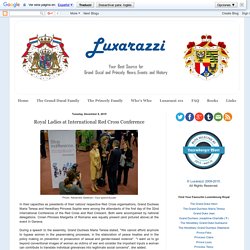 Both were accompanied by national delegations. Crown Princess Margarita of Romania was equally present (and pictured above) at the event in Geneva. During a speech to the assembly, Grand Duchess Maria Teresa stated, "We cannot afford anymore to bypass women in the peacemaking processes, in the elaboration of peace treaties and in the policy making on prevention or prosecution of sexual and gender-based violence".

"I want us to go beyond conventional images of women as victims of war and consider the important inputs a woman can contribute to translate individual grievances into legitimate social concerns", she added. Prince Albert of Monaco lays flowers at the scene of #ParisAttack today □□ Grand Duchess attends international Red Cross conference. (AF/C/NG) In her role as President of the Luxembourg Red Cross, Grand Duchess Maria Teresa participated in the opening of the 32nd International Conference of the Red Cross and the Red Crescent on Tuesday, which took place in Geneva. 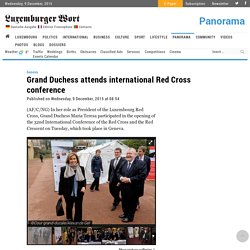 ©Cour grand-ducale/Alexande Gel More picture galleries. Masako, wife of Crown Prince Naruhito, celebrated her 52nd birthday on Wednesday, Dec.9. Prime Minister announces Royal separation. It was on this day in 1992 the inevitable transpired, The Prince and Princess of Wales called it quits and decided to separate. 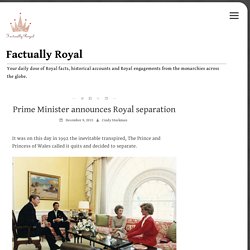 The Prime Minister made a Commons statement on the separation: “It is announced from Buckingham Palace that, with regret, the Prince and Princess of Wales have decided to separate. Their Royal Highnesses have no plans to divorce and their constitutional positions are unaffected. This decision has been reached amicably, and they will both continue to participate fully in the upbringing of their children. Kate’s tiara hat trick. It’s been a long time coming but tonight we got a glimpse of the Duchess of Cambridge in a third tiara from the royal jewel vault. 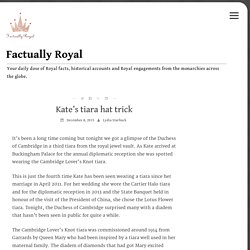 As Kate arrived at Buckingham Palace for the annual diplomatic reception she was spotted wearing the Cambridge Lover’s Knot tiara. This is just the fourth time Kate has been seen wearing a tiara since her marriage in April 2011. For her wedding she wore the Cartier Halo tiara and for the diplomatic reception in 2013 and the State Banquet held in honour of the visit of the President of China, she chose the Lotus Flower tiara. 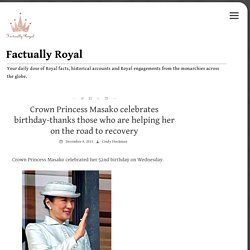 As she reflected on the past year, the Japanese Royal noted being the 70th anniversary of the end of World War II noting it is “an important year to think about the preciousness of peace.” In a statement issued by the Imperial Household Agency regarding the treatment she has received for the past 12 years for her a stress-induced illness, the Crown Princess remarked: “Taking care of my health, I have tried to fulfill my public and private duties as much as possible this year.

With the help of people around me, I would like to continue making efforts to recover.” A further statement issued by her medical team noted the royal has made numerous efforts to stay physical fit and increase the number of engagements on her schedule. The medical team felt this will give her the confidence to continue carrying out more duties as well as increase her physical well-being.

Like this: Like Loading... Prime Minister announces Royal separation. Google Traduction. Prince Charles: multifaceted in his faith. Known for his passion for the environment, architecture, the arts and education, many may not know, Prince Charles also has a keen interest in religion. 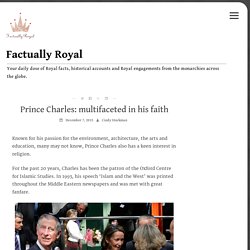 For the past 20 years, Charles has been the patron of the Oxford Centre for Islamic Studies. In 1993, his speech ‘Islam and the West’ was printed throughout the Middle Eastern newspapers and was met with great fanfare. Farhan Nizami, Centre Director, has known Charles for 20 years. La princesse Mako en visite au Salvador. (VIDEOS) TMs King Abdullah II and Queen Rania of Jordan Welcome the President of Germany to Amman. On Monday, December 7, 2015, Their Majesties King Abdullah II and Queen Rania of Jordan welcomed the President of Germany, Mr. 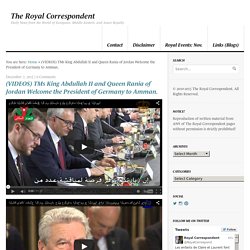 Joachim Gauck, and his partner, Ms. Daniela Schadt, to Al-Husseiniya Palace in Amman, Jordan. The purpose of President Gauck and his delegation’s two-day official visit is to pay tribute to Jordanian society’s achievement in finding shelter for hundreds of thousands of refugees; furthermore, to continue to strengthen economic and bilateral ties between Jordan and Germany. Princess Diana pictures - Princess Diana Tatler cover & Princess Diana gallery - Tatler royals. Just some of our favourite snaps of January cover girl Diana, Princess of Wales... (VIDEO) HM Queen Rania of Jordan Opens the 2nd Teacher Skills Forum. The Living Ghost – Prince Michael of Greece. There once was a young wife who was on top of the world. She had a handsome husband with a bright and promising future and together they lived in one of the most sought after neighborhoods in London, in a large and sunny apartment.

There was one thing, however, that disturbed the young women, she constantly had the same dream. In her sleep she saw a chateau, visibly very old, not particularly large, but surrounded by tall trees. Why this dream? Did this chateau exist? One day, the husband decided to take his wife for a road trip through Scotland. Our new seaside apartments on the South Coast were officially opened today by HRH The Duke of Kent @BritishMonarchy. Princess Pilolevu launches coronation photographic book. Princess Mako Akishino. #XmasCardsSpain. " Each day there is a reason for hope and harmony in our hearts. Let Xmas values light that path". Felicitación de Navidad de Sus Majestades los Reyes. Felicitación de Navidad de Sus Majestades los Reyes. Duke of Cambridge arrives in Birmingham for VC Commemorative service...#VCpavingstones. The Duke honours the bravery and sacrifice of Birmingham's ten #WW1 Victoria Cross recipients #VCpavingstones.

Royal Recipes: Kisch au Parmesan. An Hors d’Oeuvres recipe given to The Marchioness of Cambridge (nee Dorothy Isabel Western Hastings) by H.R.H. Princess Alice, Countess of Athlone. (25 February 1883 – 3 January 1981) The Coat of Arms of H.R.H. Princess Alice, Countess of Athlone. Ingredients: 3 oz. 1/2 pint (300ml) milk Three egg yolks 1/8 pint (75ml) cream Salt Cayenne pepper Method: Slice the Parmesan cheese so that it will melt gradually and evenly. If preferred, the mixture may be cooked over a bain marie to ensure the liquid does not stick nor evaporate too much. A bain-marie, gently cooking. Gently whisk three egg yolks in a medium-sized bowl. Slowly stir in the strained milk mixture, making a liquid custard.

7 Fascinating Facts about Queen Elizabeth II. 7 Fascinating Facts about Queen Elizabeth II. OTMA In Their Own Words.pdf. Princess Benedikte attended the Copenhagen Girls' Choir Christmas service today. The Princess is their Patron. Google Traduction. Queen Elizabeth not a fan of the 'selfie' craze. The Queen and her family are becoming increasingly bewildered by well-wishers clamouring to take cheeky self-portraits and video footage to post on social media. Last week’s Commonwealth Heads of Government Meeting in Malta saw the 89-year-old monarch and Prince Philip, 94, faced with a bank of mobile phones, with even fellow dignitaries getting in on the act. A royal aide said that while Her Majesty “appreciates the value of social media”, she misses eye contact with her subjects.

“The Queen’s key concern at events is that she can engage with the people she meets and have conversations with them. “It’s difficult to see how people can experience an engagement first-hand if they are watching it through a view-finder. “The Queen is aware that social media provides another way of connecting with people across the Commonwealth when she cannot physically be there. “She was essentially saying, ‘I miss eye contact,’” Mr Barzun told Tatler. “Ahhh. Prince Charles “won’t visit Israel till conflict solved” According to The Telegraph Prime Minister Benjamin Netanyahu invited The Prince of Wales to make an official visit to Israel last week when he two spoke at the COP21 in Paris. The visit is doubtful as long as the Palestinian-Israeli opposition continues unresolved.

A British government source speaking to the newspaper commented: “Until there is a settlement between Israel and the Palestinian Authority, the Royal family can’t really go there. In Israel, so much politics is caught up in the land itself that it’s best to avoid those complications altogether by not going there.” Any official visits by The Royal Family to foreign countries are authorised by the government. Despite numerous invitations over the years, the government has not permitted a visit since the end of the British mandate and the establishing of Israel in 1948. The Duke of Edinburgh visited Israel in 1994 to attend a ceremony honouring his late mother. SPECIAL EXHIBITION IN Aix-en-Provence LES COLLECTIONS DU PRINCE PHILIPP DE LIECHTENSTEIN.

Prince Harry Fell Off Horse Twice During Polo Match. At a charity polo match in Capetown, South Africa over the weekend, Great Britain's spare heir (Prince Harry) demonstrated that he is JUST LIKE all of us civilians. #Royalpalace in #Madrid at sunset - By far the most beautiful active palace in Europe. #latesttrip. Exclusive interview: Prince William discusses Christmas at Kensington Palace with his family. Out on Monday. HRH Princess Caroline of Hanover Participates in a Symposium in Monaco. (VIDEO) The Soul of a Nation: The Royal Family of Thailand. The Soul of a Nation: The Royal Family of Thailand. Prince Harry gets nostalgic after spotting Princess Diana photo at the Nelson Mandela Foundation. Prince Harry was in a reflective mood as his week-long tour of South Africa came to a close on Thursday.

The 31-year-old was given a guided tour of Nelson Mandela's former offices in Johannesburg, where he was immediately drawn to a picture of his late mother Diana, Princess of Wales. Diana met Nelson Mandela during a private visit to South Africa in March 1997 – just five months before her tragic death. A photo of their meeting lay among a number of other documents and artefacts from the world leader's life, but understandably Harry was initially focused on finding out more about his mother's time in South Africa. Princess Charlene is up at 6am every morning with the twins, reveals impressed husband Prince Albert. King Harald of Norway visiting the Jewish Museum in Oslo today, December 4th 2015. Royal Wedding Rewind: Queen Mathilde’s dress. (VIDEO) HSH Princess Stephanie of Monaco Attends a Charity Auction. Edward and Sophie enjoy a very special Christmas celebration. The Earl and Countess of Wessex got into the Christmas spirit today when they attended a special festive tea party.

(VIDEO) HIH Prince Takahito of Mikasa Turns 100 Years Young! A speech by Prince Harry at the South African Wildlife College, Kruger National Park, South Africa. Thank you everyone for the warm welcome here this morning. As someone who cares deeply about conservation, Africa and the protection of endangered animals, I look up to rangers with a huge amount of respect, knowing the hardships you face on a daily basis.