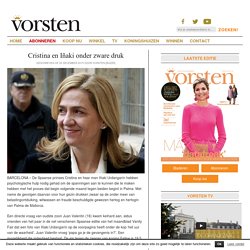 She became a mother for the first time a year ago and Princess Charlene of Monaco has proven that she's taken to motherhood like a duck to water. 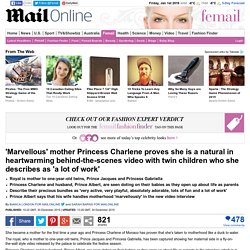 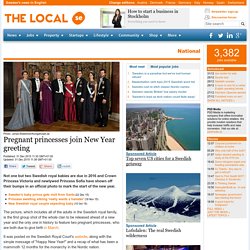 The picture, which includes all of the adults in the Swedish royal family, is the first group shot of the whole clan to be released ahead of a new year and the only one in history to feature two pregnant princesses, who are both due to give birth in March. It was posted on the Swedish Royal Court's website, along with the simple message of "Happy New Year! " and a recap of what has been a mammoth 12 months for the monarchy in the Nordic nation. 2015 saw Prince Carl Philip get hitched to former reality television star Princess Sofia in a grand royal wedding. Plus Princess Madeleine and Chris O'Neill briefly moved back to Sweden from the US, had a son named Prince Nicolas and then decided to relocate to London along with their daughter Leonore. Google Translate. Google Translate. Reza, Yasmine Pahlavi et leurs filles souhaitent une heureuse nouvelle année aux Iraniens. Queen Margrethe II announced Prince Henrik's retirement tonight during her annual New Year's speech. 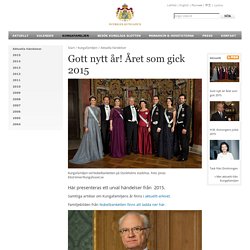 TRH have visited families in flood-hit Ballater who are now relying on this soup kitchen since floods hit. Denmark’s Prince Consort to retire – Factually Royal. The Prince Consort of Denmark, Prince Henrik, is to retire from official life, The announcement was made by his wife, Queen Margrethe II, in her traditional New Year’s Eve speech. 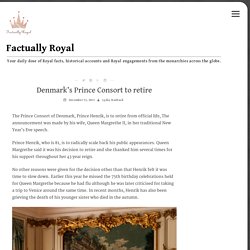 Prince Henrik, who is 81, is to radically scale back his public appearances. Queen Margrethe said it was his decision to retire and she thanked him several times for his support throughout her 43 year reign. No other reasons were given for the decision other than that Henrik felt it was time to slow down. Earlier this year he missed the 75th birthday celebrations held for Queen Margrethe because he had flu although he was later criticised for taking a trip to Venice around the same time.

In recent months, Henrik has also been grieving the death of his younger sister who died in the autumn. Denmark’s Prince Consort to retire. Helen of France, the Duchess of Aosta, returned from one of her African expeditions with t… “Lilian et le Roi” Google Translate. Qatari royals fly to Switzerland to visit former ruler at Zurich hospital after he breaks leg during vacation. DUBAI, United Arab Emirates — Qatar’s former ruler was flown to Switzerland for surgery over the weekend after breaking his leg on holiday and is now recovering there, government officials said Tuesday. 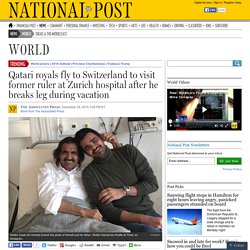 Sheikh Hamad bin Khalifa Al Thani, who ruled Qatar after a 1995 bloodless coup until handing power to his son in 2013, is undergoing physiotherapy in Zurich and recovering, the Qatar Government Communications Office said in a statement to The Associated Press. The statement said Sheikh Hamad was flown to Zurich on Saturday. Government officials declined to say how or where Sheikh Hamad broke his leg. Qatari royals fly to Switzerland to visit former ruler at Zurich hospital after he breaks leg during vacation.

Harry IS going bald: It's not just William - Prince Harry succumbs to royal baldness gene. Prince Harry showed the first noticeable signs of a thinning thatch as he attended mass at church with the royal family yesterday. 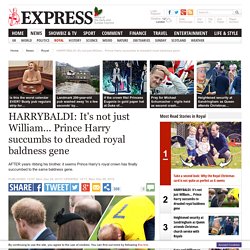 The Prince, dressed in a blue winter coat smiled and waved to well-wishers as he joined the Queen, Kate, William and his father Charles at St Mary Magdalene for Sunday morning mass at Sandringham. Experts warned Harry would soon catch his brother, who has long suffered with thinning hair. Jonny Harris, hair loss expert at the Belgravia Centre, London said: "Harry may have extremely thin hair by the time he his 50. " The royal family has struggled with male pattern baldness - the most common cause of hair loss in men - for many generations. Harry's grandfather, Prince Philip, father Prince Charles and uncle Prince Edward are all suffering various levels of baldness. But the brothers also have baldness gene on their mother's side - Princess Diana's father, the late Earl Spencer had very thin hair.

Her Majesty is the over-50s fashion Queen. Prince Charles - Islamic State terror group will wipe Christians from Iraq in five years. The Prince of Wales described the protection of the Christian faith in the region as the “greatest challenge we face”. 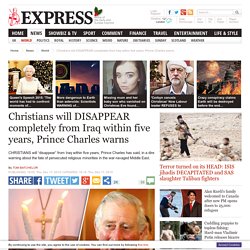 Around 250,000 Christians are still in Iraq but 100,000 of these have been displaced by fighting and the threat from Islamic State. Thousands more have fled the country - and neighbouring Syria - as ISIS continues its bloody terror campaign against those unwilling to pledge loyalty to the death cult. Charles told a gathering of UK-based clerics that "emergency help" was needed to avert the disaster. Speaking at Archbishop House in central London about the threat to Christians in the Middle East he said: "Their suffering is symptomatic of a very real crisis which threatens the very existence of Christianity in the land of its birth.

"This affects us all, consequently the greatest challenge we face is how to ensure the spiritual and cultural heritage of Christianity in the Middle East is preserved for future generations.” One week to go! #TrustAt40. Tesouras & Tiaras: Best of 2015 - Mette-Marit. Este ano estou a começar pelas mais difíceis. 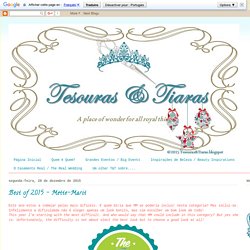 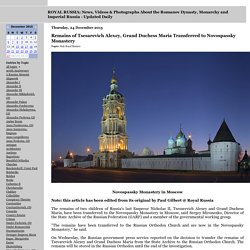 "The remains have been transferred to the Russian Orthodox Church and are now in the Novospassky Monastery," he said. On Wednesday, the Russian government press service reported on the decision to transfer the remains of Tsevarevich Alexey and Grand Duchess Maria from the State Archive to the Russian Orthodox Church. Google Translate. Google Translate. Kate Middleton and other Royal family members attend Sandringham church service.

Revealed: The obscure law that allows Prince Charles to set off nuclear bombs without fear of criminal punishment. John Kirkhope's research paper reveals Prince Charles' legal benefits The Prince of Wales is also exempt from breaching Data Protection ActSpecial privileges thanks to his title as Duke of Cornwall Dr Kirkhope is a visiting research fellow at University of Plymouth By Joseph Curtis For Mailonline Published: 14:49 GMT, 27 December 2015 | Updated: 16:41 GMT, 27 December 2015 An obscure law allows the Prince of Wales to set off nuclear bombs without fear of punishment, a new study has revealed. The Royals and a St Bernard dog at #Sandringham today @BritishMonarchy @britishroyals @MiddletonMaven @WWKD_Official. No Cookies. To use this website, cookies must be enabled in your browser. To enable cookies, follow the instructions for your browser below.

Facebook App: Open links in External Browser There is a specific issue with the Facebook in-app browser intermittently making requests to websites without cookies that had previously been set. This appears to be a defect in the browser which should be addressed soon. William and Kate join Queen and rest of royal family in attending Sandringham church. The royals were out in force attending church today as they enjoyed Christmas on the Sandringham Estate.

Kate Middleton, 33, who was wearing a checked mauve-coloured jacket and skirt, delighted crowds by accepting flowers from them after the service. Prince William, 33, was also present but their children George and Charlotte appeared to have stayed at home. Prince Harry, 31, wore a tailored coat and suit while father Prince Charles looked smart in a brown coat clutching an umbrella, like Wills. As on Christmas Day, security was tight with plain clothes and uniformed police backed up by metal detectors and sniffer dogs patrolling the paddock outside the St Mary Magdalene Church. Philip, 94, walked with his family to the church as the Queen, 89, arrived by car wearing cream. Prince Charles and Ant & Dec turned the unlikeliest of pals. ‘I found myself getting a bit over-familiar and grabbing His Royal Highness and slapping him on the back a bit’: How Prince Charles and Ant & Dec became the unlikeliest of friends It’s the most intimate Royal documentary EVER.

Now Ant and Dec reveal how they hung out with the heir to the throne for an entire year, how Charles opened up about his ‘darling’ Camilla, invited their wives over for a wild weekend with Rod Stewart, and introduced them to William and Harry – with hilarious results… Here’s a Royal conundrum. Who would you pick to spend a year shadowing the heir to the throne with a film crew, with unprecedented access to his closest family and friends? Hanging out for 12 months with McPartlin and Donnelly for the remarkable fly-on-the-wall TV documentary, When Ant And Dec Met The Prince: 40 Years Of The Prince’s Trust, Charles proves that, contrary to what his critics may say, he is neither stuffy nor remote. Prince Charles makes us cringe, reveal William and Harry in Ant and Dec interview. He is, officially, His Royal Highness Prince Charles, Prince of Wales, Earl of Chester, Duke of Cornwall, Duke of Rothesay, Earl of Carrick, Baron of Renfrew, Lord of the Isles and Prince and Great Steward of Scotland.