The Countess of Wessex, Honorary Air Commodore, visited @RAFWittering1 flying on a Grob Tutor aircraft @RoyalAirForce. Russia digs up remains of last tsar in murder probe. Russian investigators have exhumed the remains of the country's last Emperor Nicholas II and Empress Alexandra as part of a new probe into the 1918 killing of the Romanov family. 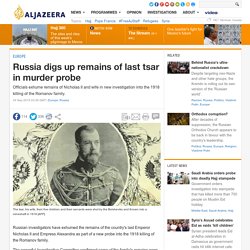 The powerful Investigative Committee confirmed some of the family's remains were being re-examined, with spokesman Vladimir Markin saying the probe would look into "the circumstances of the death and burial of the imperial family. " The tsar, his wife, their five children and their servants were shot by the Bolsheviks and thrown into a mineshaft in 1918 before being burnt and hastily buried.

William and Harry show off DIY skills as they help fix up homes for military veterans. Wearings jeans and workmen's helmets emblazoned with their names, the two brothers got stuck into work on an ambitious project to turn an entire street in Manchester into homes for ex-services personnel in just three weeks with the BBC's DIY SOS team. 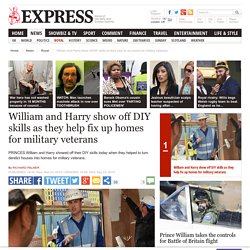 In a shirt and jumper, the Duke of Cambridge, 33, helped paint a wall, while Harry, 31, still sporting the beard he grew on a conservation trip to Africa, sported a grey hoodie and T-shirt to lay a patio. Inevitably, there was a bit of brotherly banter and competition as they set to work after being briefed about their tasks. "Game on," said William, raising an eyebrow towards his younger brother. Princes William and Harry @KensingtonRoyal help @DIYSOS add the final touches to homes renovated for veterans today. The Princess Royal, Patron of @Scotlandteam, will attend today's #SCO match against #JPN #RWC2015 #SCOvJPN. RSGS sur Twitter : "HRH The Princess Royal @BritishMonarchy awarding @lindseyhilsum with the RSGS Mungo Park medal.

Secret Lives Princess Margaret 1997 VHSrip. Prince Harry's facial hair sends Twitter ablaze during Battle of Britain flypast. Prince Harry has returned to the UK to start life as a full-time royalShowed off a ginger beard as he celebrated 31st birthday Social media erupted with support for his new facial fuzz First engagement was a Battle of Britain flypast in SussexHe will also carry out a series of engagements for the RFUWill join the Duke and Duchess of Cambridge at Twickenham on Friday By Rebecca English for MailOnline and Bianca London for MailOnline Published: 10:18 GMT, 15 September 2015 | Updated: 17:45 GMT, 15 September 2015. 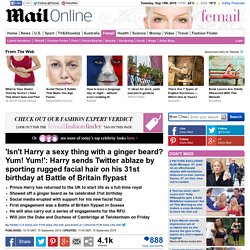 Crowns of the World. Diana Award. Prince William reveals who he'd turn to in need in honour of Diana Award scheme. Together till the very end - Wills would want The Duchess of Cambridge in his corner Taking part in an anti-bullying training session for school pupils run by the Diana Award, the only charity that still bears his late mother's name, the second in line to the throne wrote down a formidable list of people who would fight his corner. 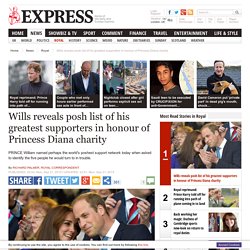 "Catherine, Harry, Father, Grandmother, Grandfather," he wrote on the fingers of a giant hand, adding his pet cocker spaniel Lupo in brackets below the last one as a cheeky bonus. It was a powerful list but even that was perhaps eclipsed by the edgy message he sent out about royal support for gay, lesbian, bisexual, and transgender people. The future King, honouring his mother's memory, reached out to ‎Britain's youth and, echoing her efforts to comfort and champion the plight of gay men with HIV/Aids, spoke out against homophobic bullying. "I would try to confront, to tackle the person. Tessy Ojo, chief executive of the Diana Award agreed about William. BritishMonarchy sur Twitter : "The Queen has now sent over #1million messages of congratulations for special birthdays and anniversaries. Kensington Palace sur Twitter : "Prince Harry, Honorary President of #RWC2015: "Welcome to Twickenham, to England 2015 and to the 8th Rugby World Cup"

Prince Harry takes centre stage in the Rugby World Cup opening ceremony. It was not quite as startling as the Queen's appearance with James Bond actor Daniel Craig at the London 2012 Olympics but Harry, 31, certainly got into the spirit of things as the world watched the six-week tournament begin at Twickenham. 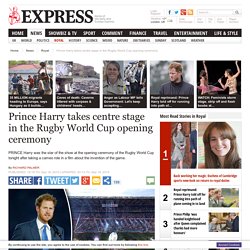 The fifth in line to the throne appeared briefly as a watching gardener alongside England hero Johnny Wilkinson in a scene dramatising the moment William Webb Ellis is said to have picked up the ball at Rugby School in Warwickshire in 1823, run towards the posts, and turned a football kicking match into a different handling game. The film also featured England rugby legends Will Greenwood, Bill Beaumont, Jason Leonard, Sir Clive Woodward, and former Scotland and British Lions coach Sir Ian McGeechan. In the film, Wilkinson asked what Ellis was doing picking up the ball. "Don't worry, Jonny. Japanese princess's secret year in Leicester. Comments (1) Her Imperial Highness Princess Mako of Akishino, first-born granddaughter of the Japanese Emperor, has secretly been living in Leicester for the last year. 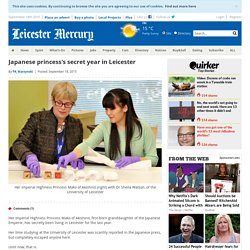 Her time studying at the University of Leicester was scantily reported in the Japanese press, but completely escaped anyone here. Until now, that is. Mellow Yellow sur Twitter : "@RapeseedOilMan welcomed HRH The Duke of Gloucester & Lord Lieutenant Mr Laing to unveil expansion @BritishMonarchy. BritishMonarchy sur Twitter : "The Princess Royal, Colonel-in-Chief of @RHQ_The_RLC, yesterday visited 17 Port and Maritime Regiment. Prince Harry spends his birthday with former girlfriend Cressida Bonas - hellomagazine.com. Prince Harry rang in his 31st birthday surrounded by a group of close friends on Tuesday evening – as well as his former girlfriend, actress Cressida Bonas. 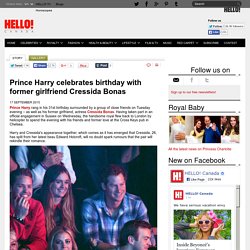 Having taken part in an official engagement in Sussex on Wednesday, the handsome royal flew back to London by helicopter to spend the evening with his friends and former love at the Cross Keys pub in Chelsea. Harry and Cressida's appearance together, which comes as it has emerged that Cressida, 26, has split from her latest beau Edward Holcroft, will no doubt spark rumours that the pair will rekindle their romance. Harry and Cressida pictured together in 2014; the pair still remain good friends. Charles-348381.jpg (JPEG Image, 590 × 730 pixels) Duchess of Cambridge ends four month maternity leave with visit to mental health clinic.

Kate, looking slim in a £1,245 Ralph Lauren houndstooth dress, showed off her new look – a full fringe- on her first solo engagement since going off on leave before the birth of Princess Charlotte on May 2. 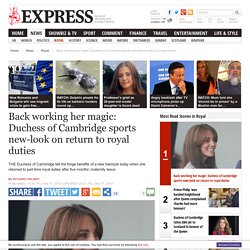 She visited the Anna Freud Centre and its associated Family School in Islington, North London, on the latest part of her mission to champion the need for early intervention to deal with a national epidemic of mental health issues facing one in 10 children. The school, which offers therapy and academic lessons to children with severe emotional and behavioural problems in joint sessions with their parents, will form part of a £25 million integrated centre of excellence housing mental health experts and researchers due to open in Islington in 2018. Five months off and the inevitable sleepless nights with her second child appeared to have taken no toll on Kate’s mental sharpness. PA Sport Pic Desk sur Twitter : "Prime Minister @David_Cameron, Prince Harry and former England player Jason Leonard at the #RWC2015 Welcome Party. NSPCC sur Twitter : "Thank you to our President HRH The Countess of Wessex for visiting our #Swansea service centre!

Telegraph Museum on Twitter: "It was our first Birthday yesterday and we had a special visit from HRH The Earl of Wessex. Here's a pic... BritishMonarchy sur Twitter : "The Duke of Cambridge @KensingtonRoyal will present 67 honours at today's #Investiture at #WindsorCastle. BritishMonarchy sur Twitter : "The Duke of Kent yesterday opened @Surrey5GIC,which aims to drive development of mobile comms & wireless connectivity. Queen Elizabeth II breaks record as longest-serving monarch, surpassing Queen Victoria. The Queen is already Britain's longest-lived monarch and the world's oldest-serving sovereign. 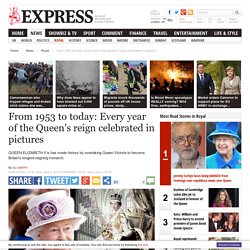 At approximately 5:30pm today, the Queen will break her great-great-grandmother Queen Victoria's record of 63 years, seven months and two days on the throne. However, Buckingham Palace insists it will be "business as usual" despite the day's historical significance. A royal spokesman said: “She’s not celebrating at all.” The Queen, 89, had originally planned to spend the day privately at Balmoral. But, she has since agreed to travel to Tweedbank, Scotland to open the new Scottish Borders Railway, the longest domestic line to be built in Britain for more than 100 years. RSGS sur Twitter : "HRH The Princess Royal @BritishMonarchy awarding @lindseyhilsum with the RSGS Mungo Park medal. BritishMonarchy sur Twitter : "The Duke of Edinburgh, Colonel in Chief, visited Leuchars - 2 Close Support Battalion @Official_REME today. The Romanovs - An Imperial Family [2000] 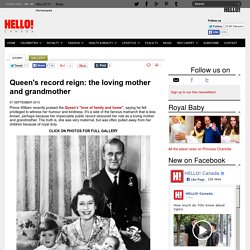 It's a side of the famous matriarch that is less known, perhaps because her impeccable public record obscured her role as a loving mother and grandmother. The truth is, she was very maternal, but was often pulled away from her children because of royal duty. The Queen showing off her young family in 1951 the year before ascending the throne In 1948, Elizabeth became a mother, aged 22, with the birth of her first child, Prince Charles, who was followed by a sister, Princess Anne, in 1950. "Don't you think he is quite adorable? " Ten years after Anne's arrival came her second son, Andrew, in 1960, and Edward followed four years later. She adored being a mother but public duty often took her away from the children. Queen's record as longest serving monarch: the loving mother and grandmother - hellomagazine.com.

A peek at the Queen's breakfast: Twinings tea, cookies and cornflakes - hellomagazine.com. Next week the Queen breaks the record for the longest-reigning British monarch in history – a sign of her stay, longevity and good health. So, how does Her Majesty kick off every day of her reign, which on 9 September reaches 63 years and 216 days? We take a look at her royal routine... Queen Elizabeth II is an early riser, author of At Home With The Queen Brian Hoey tells People magazine, waking at 7:30am.

A footman carries a "calling tray" of Twinings' English breakfast tea in a bone china cup and saucer, served with milk and Marie cookies, which a maid brings into her room. Tsar Nicholas II's son and daughter will be buried with the rest of the family. Government task force has announced plans to bury them on October 18 Remains held in a repository at the State Archives since discovery in 2007Delay after Orthodox Church refused to acknowledge results of DNA testsBurial set to take place at Peter and Paul Cathedral in Saint Petersburg By Lydia Willgress for MailOnline Published: 16:13 GMT, 11 September 2015 | Updated: 19:04 GMT, 11 September 2015.

News Distribution Network, Inc. The Queen surpasses her great-great grandmother Queen Victoria to become Britain's longest reigning monarchRather than mark the milestone with celebratory events, Her Majesty is carrying out official duties in ScotlandThe monarch was joined by the Duke of Edinburgh as she opened the new £294million Scottish Borders Railway By Stephanie Linning for MailOnline. Queen Elizabeth II is business as usual as she replaces Victoria as longest serving monarch. The photo shows the Queen working through one of her red boxes in the audience room at Buckingham PalaceShe wears a pink floral print dress by couturier Karl Ludwig that was last seen during a visit to Perth in 2011 Surrounding her are family photographs, including one of Prince Harry and another of her as a young girlThe Queen will become the UK's longest reigning monarch at around 5.30pm today, surpassing Queen Victoria By Ruth Styles for MailOnline and Rebecca English for MailOnline Published: 23:01 GMT, 8 September 2015 | Updated: 10:39 GMT, 9 September 2015 An official picture of the Queen hard at work reading government correspondence has been released to mark the day she becomes the longest reigning monarch in British history - overtaking Queen Victoria.

The company is so secretive about its work that it normally declines to speak to the media, but agreed to talk to MailOnline about the Queen's official boxes in honour of her becoming the country's longest-serving ruler today. One of the boxes is seen in the fore of a new portrait of the Queen issued by Buckingham Palace to commemorate the occasion - and it has now been revealed that a secret message lay hidden inside one such box for more than 70 years. Scroll down for video. Message to Queen Elizabeth and George VI discovered inside an official despatch box.